Home owners could see their monthly mortgage bills rise by hundreds of dollars in coming weeks after the Reserve Bank hiked interest rates for only the second time since 2010.

Westpac became the first major lender to pass on the rise, announcing on Tuesday night it would lift its variable home-loan rate by half a percentage point.

The RBA said it lifted the cash rate from 0.35 per cent to 0.85 per cent to tackle rising inflation triggered by a range of international and local factors including the war in Ukraine and historically low unemployment.

The central bank predicted last month that annual inflation would reach 6 per cent by the end of the year – well above its target band of 2-3 per cent.

But RBA governor Philip Lowe conceded on Tuesday that in the near term “inflation is likely to be higher than was expected a month ago”, due to higher prices for electricity, gas and petrol.

If passed on in full, Tuesday’s rate hike will add $133 to the monthly repayments of home owners paying the average variable rate on a $500,000 mortgage, while those owing $1 million will be slugged with a $265 monthly increase.

It comes as households grapple with a cost-of-living crisis that has seen real wages fall at the fastest pace in more than two decades. 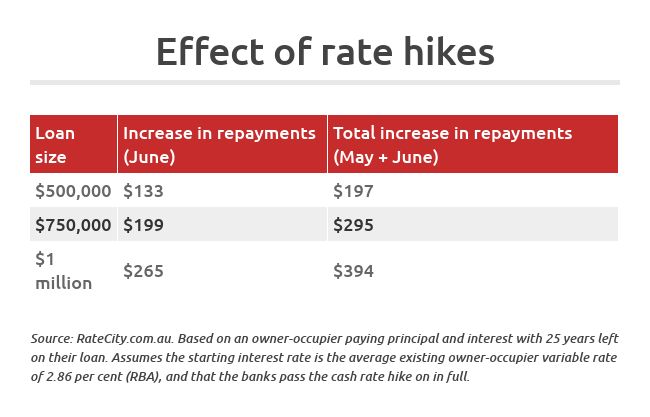 Foot off the gas pedal

Dr Steven Hamilton, an assistant professor of economics at George Washington University, said the rate hike was “perfectly sensible” and its larger-than-expected size showed inflation and wages were rising faster than the RBA had previously expected.

He told The New Daily the bank had to lift rates quickly enough to ensure inflation didn’t get away from them but not so quickly as to trigger a recession.

“And that’s good – because other countries have shown that if you let inflation run away, it can get away from you.”

Dr Hamilton also noted that because interest rates are still so low, Tuesday’s rate hike amounts less to a brake on the economy than an easing off on the gas pedal.

The RBA cut rates to a record low of 0.1 per cent in November 2020 to support jobs and economic growth after the pandemic lockdowns led to a drop in consumer spending and a sharp rise in unemployment.

But the central bank now faces a completely different set of problems, with unemployment at its lowest level in almost 50 years.

Demand for goods and services is strong today but supply has been limited by the war in Ukraine and COVID-related disruptions, with too much money chasing too few goods and pushing up prices as a result.

The RBA is therefore lifting interest rates in an attempt to reduce demand and put downward pressure on inflation.

Economic resilience to be tested

Indeed APAC economist Callam Pickering said the RBA would hike rates aggressively until the end of the year to tackle inflation that has reached a two-decade high, with Tuesday’s hike “just a taste of what’s to come”.

But he said it remains unclear how effective the rate hikes will be in tackling the rising prices as so many of the factors behind the inflation are international.

“With inflation at a two-decade high, the RBA will hike rates aggressively over the remainder of this year,” Mr Pickering said.

“Whether these rate hikes will work is the trillion dollar question.

“Australia has imported high inflation from abroad and that is not typically a channel through which the RBA has tremendous influence.”

Mr Pickering said Australia’s economic outlook rests on two key uncertainties: The duration of the current wave of inflation, and the effectiveness of the RBA rate hikes in addressing it.

“The entire economic outlook is connected to these uncertainties,” he said.

“What we do know, though, is that the ability of households and businesses to weather the inflationary storm declines the longer it lasts.

“Budgets will gradually tighten and savings will deplete and if it lasts too long then we tip over into recession.”

‘A taste of what’s to come’: Home owners slugged with second rate hike