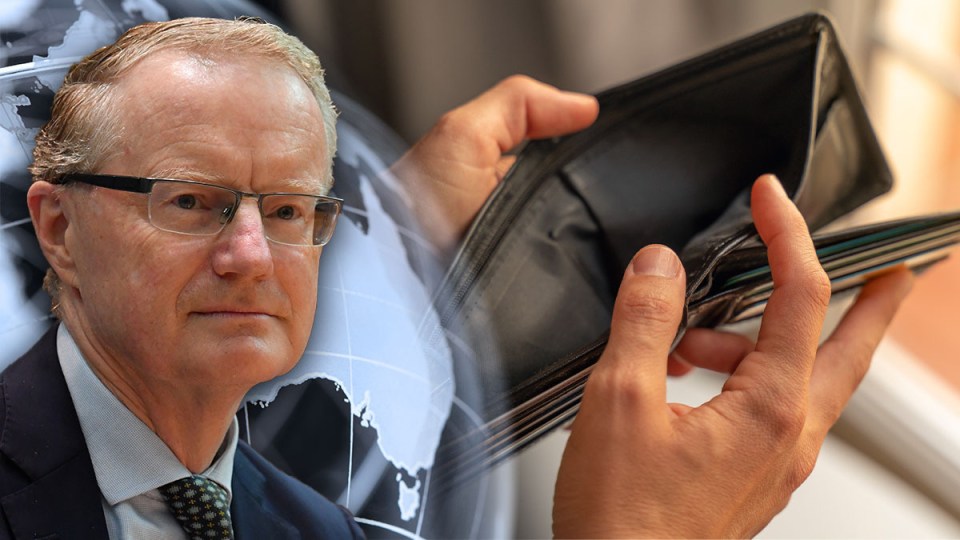 Millions of home owners are likely to avoid big hikes to their mortgages next year, with wages data released on Wednesday supporting the Reserve Bank’s position that a rate hike next year is unwarranted.

The Australian Bureau of Statistics revealed on Wednesday that wages had risen by 2.2 per cent over the 12 months to September.

That was up from 1.7 per cent in the June quarter – but well below the “three point something” that Reserve Bank of Australia governor Philip Lowe thinks will be needed for the central bank to lift interest rates.

But real wages, which take into account inflation, barely moved at all. Over the past year they rose by just 0.1 per cent.

“This [data] will bolster the RBA’s confidence in rates being lower for longer than market expectations,” EY chief economist Jo Masters said.

“Just one out of 18 industries – professional, scientific and technical services – recorded annual wages growth above 3 per cent.”

In fact, many workers are going backwards, with the cost of essential goods still outpacing wages growth.

Over the quarter, wages rose by 0.6 per cent.

But over that same period, house prices rose by 4.8 per cent and petrol prices jumped by a massive 7.7 per cent.

When will rates rise? RBA v the markets

All the data points to a disagreement between Dr Lowe and financial markets about how fast Australia’s economy will bounce back from the pandemic.

Dr Lowe doesn’t think interest rates – currently at 0.1 per cent – will rise before 2023 at the earliest, but markets are pricing in a rate hike next year.

This gap has Dr Lowe scratching his head, as he explained on Tuesday.

“The economy and inflation would have to turn out very differently from our central scenario for the board to consider an increase in interest rates next year,” Dr Lowe said in a speech to a room of economists.

Crucial to the RBA’s thinking is the idea that wages growth will only pick up gradually over the next two years, partly because pay packets have been stagnant for a decade, causing substantial “inertia” in the system.

Wages growth is central to the inflation outlook because generally it’s only when workers can afford more goods and services that demand picks up enough to sustain higher prices, justifying an increase in interest rates.

So, in the RBA’s view, rates are most likely to rise in 2024, but could go up in 2023 if the economy bounces back faster than economists expect.

Today’s data was consistent with this view, according to BIS Oxford senior economist Sean Langcake – a former RBA economist himself.

“The data is definitely in line with the RBA’s view of the world,” he said.

“But there’s just so much water to go under the bridge between now and the end of 2022.”

Wages or costs: The drivers of prices

One key uncertainty for the RBA’s inflation and rates forecast is whether a spate of cost increases stemming from global supply chain issues will move inflation into the RBA’s target band (2-3 per cent) and keep it there during 2022.

This type of inflation is known as cost-push inflation and is when businesses pass on higher costs to consumers in the form of higher prices for their goods.

It’s undesirable, as it reduces the purchasing power of people.

We’re seeing it in everything from higher housing costs to petrol prices and even household goods such as furniture and electrical appliances.

Dr Lowe said on Tuesday that the RBA is prepared to look through this cost-push inflation, but only to a point. That means it’s possible that the interest rate might go up sooner if these higher prices stick around.

Inflation already rose faster than expected over the September quarter, with the underlying rate – which cuts out volatility – rising to 2.1 per cent.

It was the first time inflation hit the 2-3 per cent target band since 2015.

Headline inflation rose to 3 per cent, and using this measure real wages (purchasing power) actually fell 0.8 per cent in the September quarter.

And it’s worse news if you’re in the market for a house. Property prices rose eight times faster than wages in the September quarter.

Ironically, low interest rates are fuelling this house price growth, but the RBA is much more interested in lower rates tightening the jobs market.

That’s because the type of inflation Dr Lowe is chasing is called demand-pull inflation.

What needs to happen for wages to rise

Demand-pull inflation occurs when wages growth raises purchasing power for workers, pushing up their demand for goods and services and eventually pushing up prices.

That only happens when the jobs market is tight enough to force bosses to lift pay packets in order to attract the workers they need to expand.

And because the bargaining power of workers has eroded over the past decade as the jobs market has globalised, Dr Lowe thinks we will need unemployment to reach record low levels before wages growth picks up.

This would mean unemployment falling from the current rate of 5.2 per cent to 4 per cent or lower.

And on this measure, Wednesday’s wage data shows green shoots.

Wages pressures are not building as fast in Australia as they are in the US or even New Zealand, but in industries where labour shortages have been reported, wages are growing faster than the economy average.

Accommodation and food services and construction are good examples. Over the September quarter, wages growth was 2.5 per cent in the former and 2.6 per cent in the latter.

But there is little to suggest these industry-specific trends are broadening to the larger Australian jobs market just yet.

And that is ultimately what will determine when interest rates will rise.