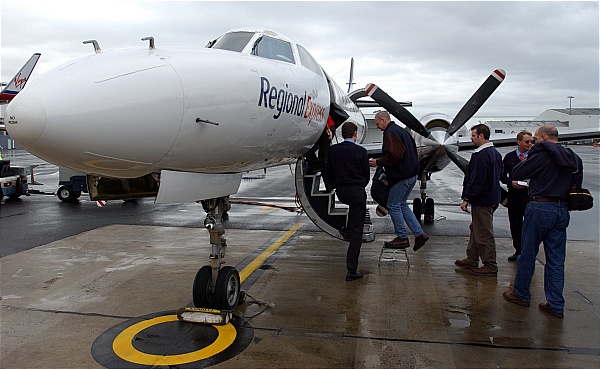 Regional airpots are the bloodline of many communities. Photo: Regional Express

The airlines carrying Australians from capital to capital by air could change next year, with Regional Express says it is considering entering the market, capitalising on Virgin Australia’s entry into voluntary administration.

And it appears to have backing.

The regional airline said on Wednesday it would need $200 million to start “domestic operations in Australia” and had been approached by several parties about providing the equity.

“The Rex board believes that with sufficient capital injection, there is a confluence of circumstances which render the start of domestic operations by Rex to be a particularly compelling proposition,” it said.

The plan comes at a troubled time for the airline industry with the vast majority of flights grounded domestically and almost no international passenger planes flying.

In March, as strict travel restrictions were imposed to help slow the spread of the coronavirus, Rex was one of the Australian airlines to benefit from a $715 million federal government boost to help the sector navigate the pandemic.

The company said on Wednesday it would decide if it should proceed with its capital city plan within eight weeks.

If it did, domestic operations would take off on March 1, 2021, and the regional airline would take on the might of Qantas and – most likely – Virgin Australia under its new owners.

Of course, it will need new planes to do so.

Airline vice chairman John Sharp told ABC radio this week about $130 million would be needed to lease 10 Boeing 737s to run the routes.

Rex has a fleet of 60 Saab 340 turboprop aircraft.

Before the pandemic it was flying 1500 weekly flights to 59 destinations in regional Australia.

Since the virus crisis it has been flying just five routes in Queensland as part of a contract with the state government.

Rex has a history of jumping at opportunities: It began in 2002, fresh off the back of Ansett’s collapse.

Regional airline looks to take on might of Qantas, Virgin Australia