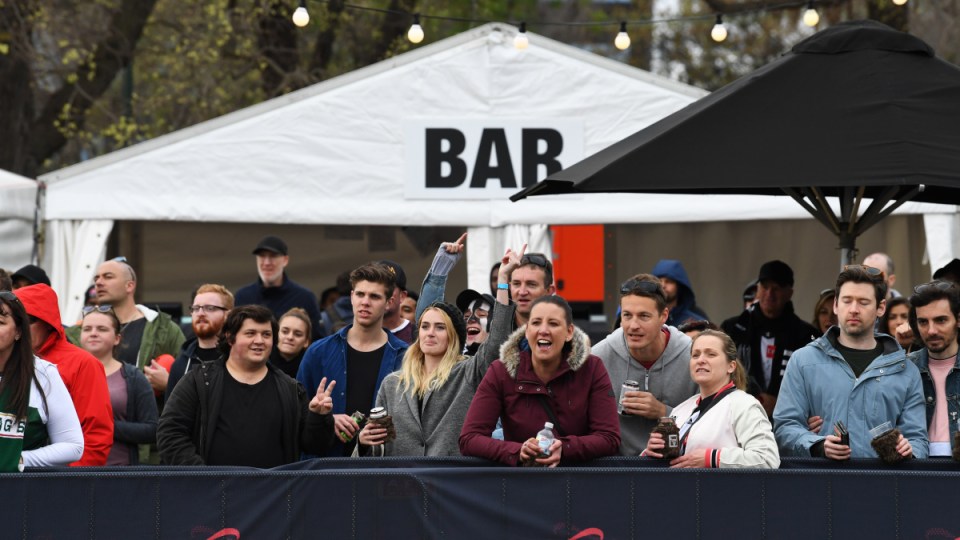 Australia’s leading sporting leagues and clubs are awash with cash from multinational booze brands, with experts warning that pervasive alcohol advertising in sport is harming children.

A new study has revealed the extent that foreign multinationals leverage the popularity of the AFL and NRL to market their alcohol brands – and the clubs that take in the most money from them.

The report by the Foundation for Alcohol Research and Education (FARE) analysed the prevalence of alcohol advertising in the AFL and NRL from February 11-28, 2019. 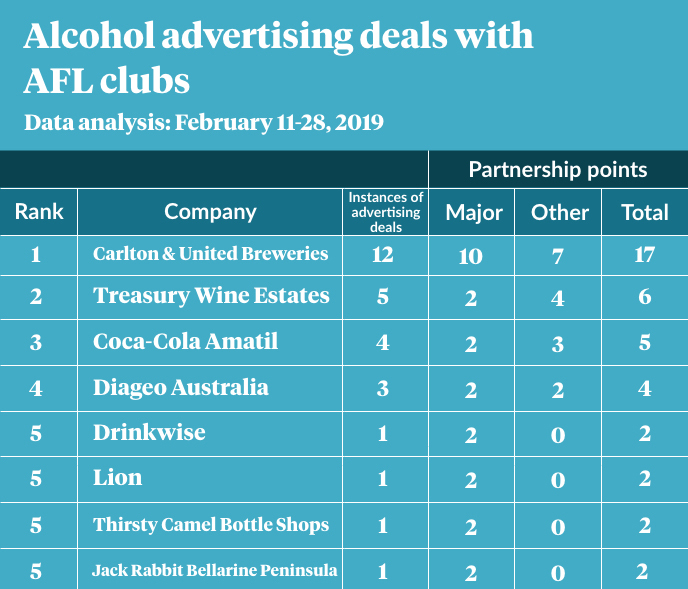 Four of the world’s largest foreign-owned alcohol companies dominate AFL and NRL advertising, with Belgian-owned Carlton & United Breweries boasting the most deals of any firm. 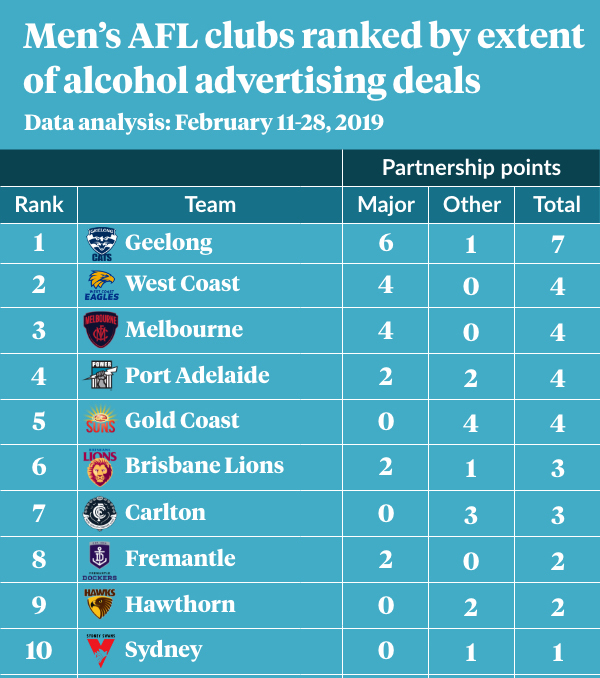 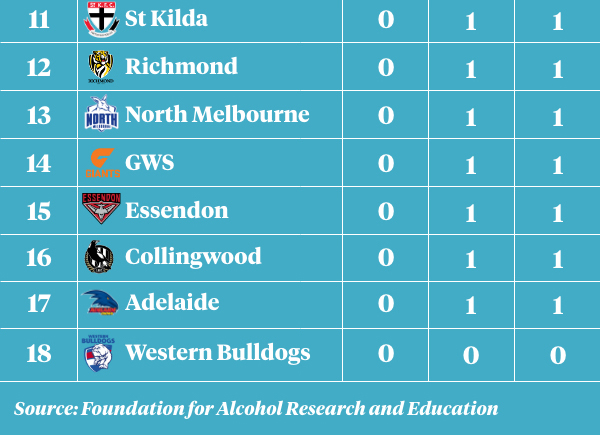 The analysis found that 17 of 18 men’s AFL clubs accept money from the alcohol industry, with Geelong raking in most.

The Western Bulldogs were the only men’s AFL club free of alcohol advertising. 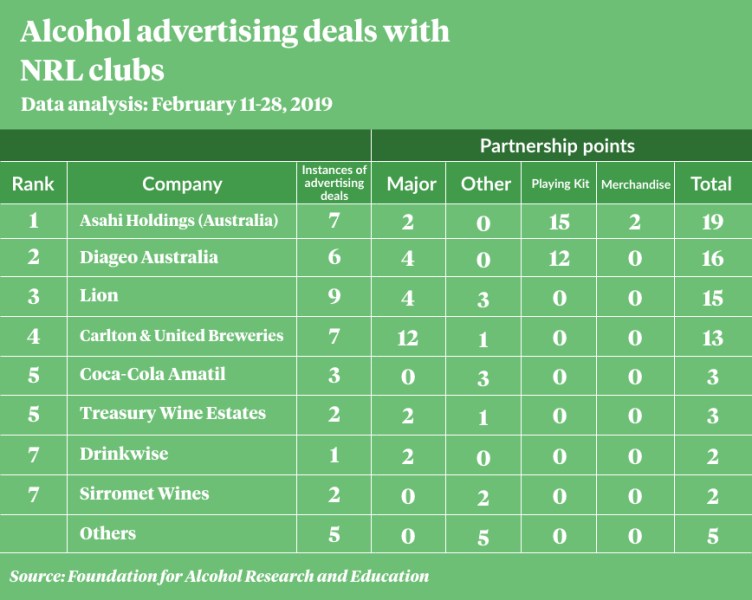 In the NRL, 15 of the 16 official clubs accept money from the alcohol industry.

North Queensland Cowboys accepted the most, while Melbourne Storm was the only club with no alcohol advertising deals.

Research shows that exposure to alcohol advertising increases the likelihood that a young person will begin drinking, or for those already drinking, will increase the amount they drink and the likelihood of drinking at dangerous levels. 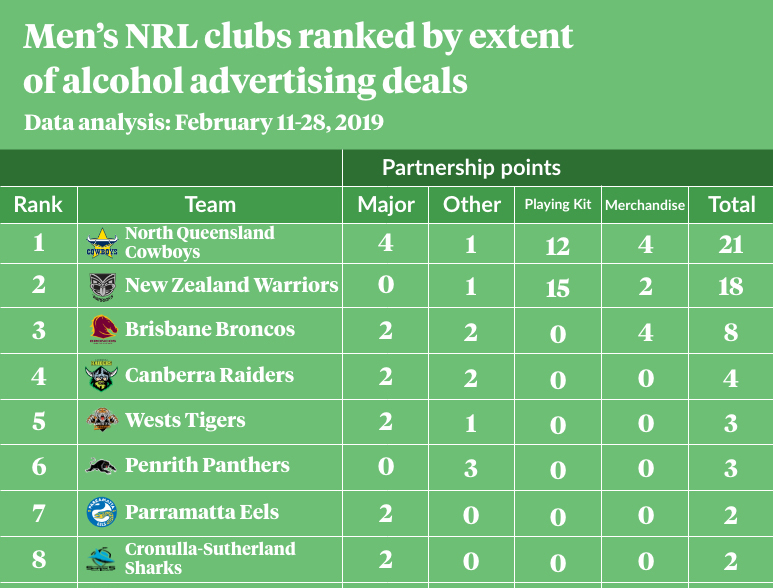 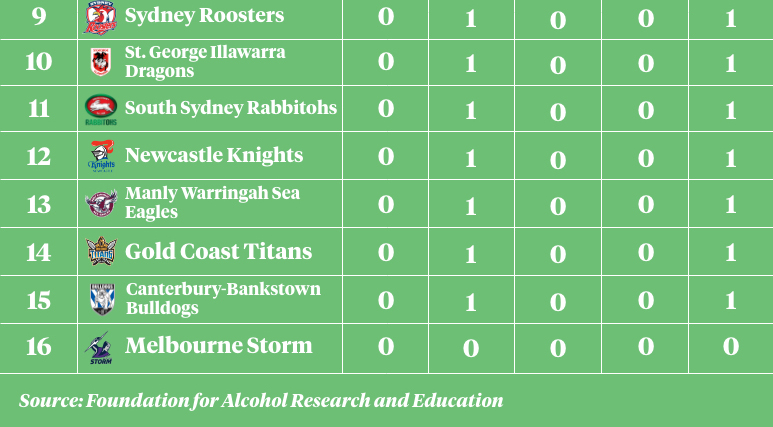 In Australia, alcohol leads to thousands of deaths each year, and is a factor in more than 200 diseases and injury conditions.

The New Daily asked the AFL and NRL to justify the prevalence of alcohol advertising in their leagues given the evidence of its harmful impact on young people.

An NRL spokesman said that 91 per cent of NRL’s television audience is aged over 18 and that the league has an agreement with DrinkWise promoting responsible alcohol consumption.

“The sponsorship fees paid by alcohol companies to sporting organisations are critical to the ongoing viability of many sporting events and programs, including grassroots activities,” he said.

The AFL acknowledged The New Daily’s questions, but did not respond by deadline.

The industry-regulated Alcohol Beverages Advertising Code contains a major loophole that allows booze brands to sponsor sporting clubs without being bound by advertising regulations, she said.

Alcohol companies also benefit from a loophole in the Free TV code. While the code restricts alcohol advertising to after 8.30pm on commercial television, this doesn’t apply to sports programs broadcast live on weekends or public holidays.

“There’s a significant body of research that shows that young people are exposed to a high level of alcohol advertising during sports games, and that exposure does influence young people’s drinking habits,” Dr Reeve said.

Dr Reeve attributes the lax rules to the political influence wielded by the alcohol industry, which is “a significant and powerful economic actor in Australia”.

“Sports sponsorship is a key way for alcohol companies to reach their market, and that’s partly why we have these loopholes,” she said.

The reach of alcohol in sport extends from the elite level to the grass roots, University of Newcastle behavioural scientist Kypros Kypri said.

There is a “persistent association” between alcohol and sport in Australia, with studies showing that people are more likely to be “hazardous drinkers” if playing for a club sponsored by an alcohol brand, Professor Kypri said.

“If you’re going to be involved in sport, you’re pretty much guaranteed of being presented with imagery from the alcohol industry,” he said.

“If you watch rugby league, cricket or AFL you’re going to see sponsorship on billboards and shirts. There’s environmental exposure in the physical environment where sports are played, as well as on TV and in the media.”

The AFL and NRL are saturated with alcohol advertising, and kids are drinking it in