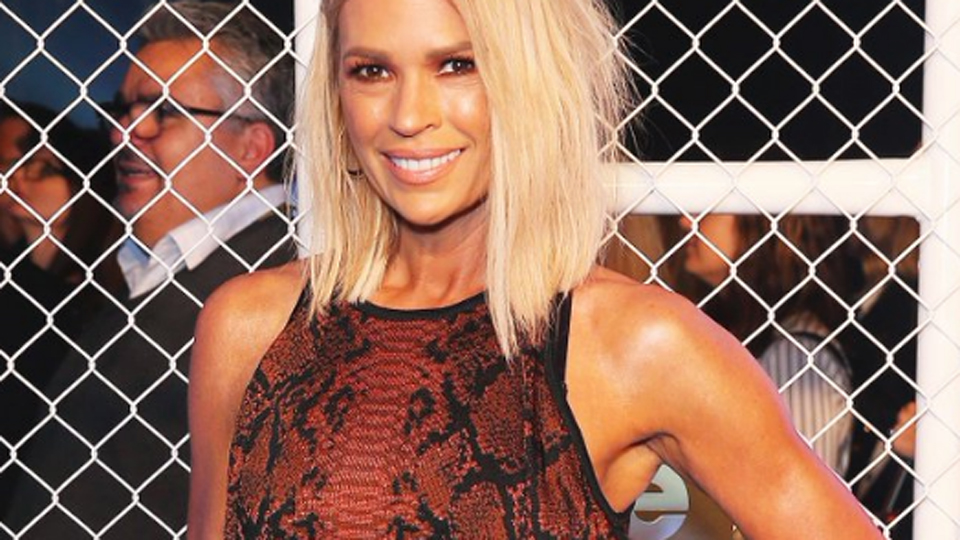 Sonia Kruger is not in danger of losing her job on Today Extra, according to Nine. Photo: Twitter

Days after Sunrise’s Edwina Bartholomew apologised to Nine reporter Seb Costello over a headline-making tweet, the latest media war sees a furious Nine lashing out at The Sunday Telegraph over treatment of the network’s women stars.

The network defended high-profile presenters Sonia Kruger, Georgie Gardner and Erin Molan over a “shameful onslaught of stories” in the News Corp newspaper.

The Telegraph claimed there are “concerns” for the trio’s careers and suggested Kruger, at one time reportedly Nine’s highest-paid female star, is facing the axe.

“The sustained attack by The Sunday Telegraph on the female presenters of Nine is aimed to damage the standing of some of Australia’s most talented women in the media,” a Nine spokesperson told The New Daily.

“Working mums Georgie Gardner, Erin Molan, Sonia Kruger and Deborah Knight are just some of the Nine women who are performing great roles across the business, yet have been targeted.”

One Telegraph story claimed Kruger will be a victim of an upcoming reshuffle at Nine, and will lose her job as host of morning show Today Extra.

“Kruger is said to have been identified as the star most easily shed”, said the story about possible network shake-ups.

It suggested Gardner will be demoted from co-hosting the struggling Today show with Deborah Knight moved to the role currently held by Kruger, who could then keep her role on The Voice “as a consolation.”

“All of the talk is made up,” a Nine spokesperson said, denying the report. Kruger has made no comment, but posted an Instagram photo of herself at a black tie event with PM Scott Morrison.

A second Telegraph story insinuated Sydney sports presenter Erin Molan has been “sidelined” by a “boys club” at Nine, amid an alleged feud with Andrew Johns.

She wasn’t part of the NRL grand final coverage on October 6.

“There is no doubt Nine’s main female sports broadcaster is being sidelined,” a source was quoted as saying.

“People in the building are concerned for her.”

But an online version was updated later to report the fact Molan took time off work for surgery on a broken shoulder.

She spent 10 days in hospital after breaking her “arm bone off entirely” when she fell down a flight of stairs fetching a bottle for her baby daughter Eliza.

Nine and News were previously at loggerheads in February, when the Telegraph apologised on page three to Gardner after publishing “exclusive claims'” of alleged “secret” focus group research.

The story said viewers were “not loving” Gardner in her Today role, and found her to be an “ice maiden” and “cold”.

Darren Wick, Nine’s head of news and current affairs, called the story “one of the most deliberate acts of bullying I’ve ever seen” and an “outrageous, false, reckless and defamatory attack” on Gardner.

Meanwhile, Seven also claims News Corp got it wrong when reporting that Bartholomew’s October 25 apology on Twitter for her “errant tweet” about Costello was matched with a payout to the journalist “of about $20,000”.

Said a Seven spokesperson, “This, and most other info around this matter, is incorrect.”

On 14/9 I made a statement on Twitter about @sebcostello9. While I won’t repeat it, what I said about him was false, hurtful and completely inappropriate . I unreservedly apologise to Seb and his family for the hurt and offence my words caused.

Social media users were sceptical of Bartholomew’s motives in apologising six weeks after her initial September 14 post, which said Costello was “surprisingly articulate for a [censored].” 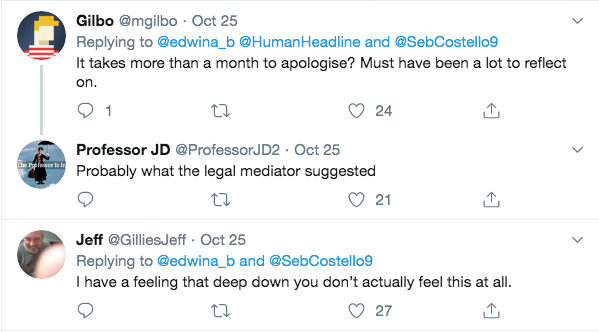 Costello said in a statement on Friday he appreciated Bartholomew’s apology but said it had been a “difficult time.”