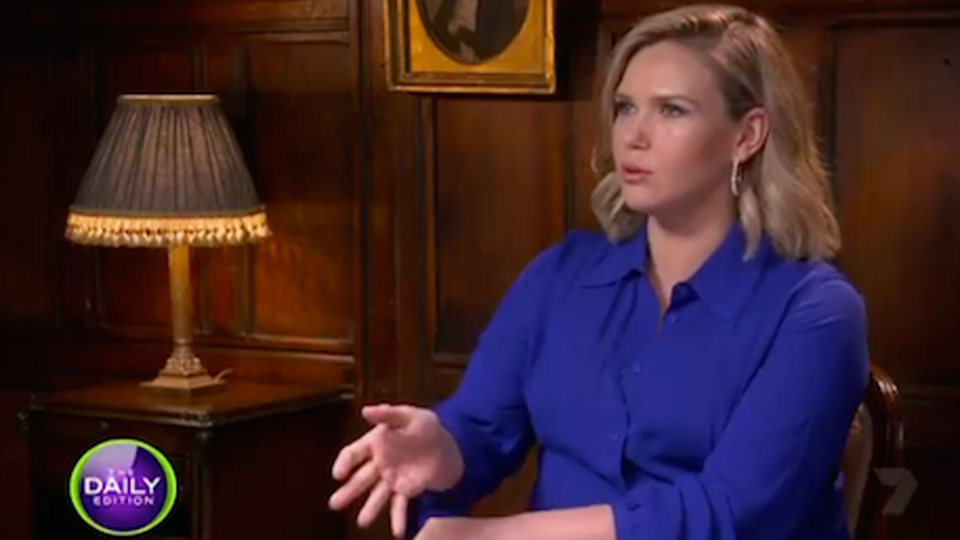 Channel Nine is considering its legal options after an astonishing tweet from Seven’s Edwina Bartholomew ignited a war of words between the two commercial TV networks.

“Our lawyers are still looking at things,” a Nine source told The New Daily on Monday.

The drama kicked off on when Sunrise star Bartholomew – who is in the UK on a work assignment – hit Twitter to comment after seeing a live cross from Nine Melbourne reporter Seb Costello on Thursday.

Costello was covering a story about a security scare in Spring St near Parliament House.

“Surprising articulate for a [censored],” wrote Bartholomew, who recently told The New Daily her first pregnancy – she’s now 26 weeks along – has been “quite torturous.”

After tweeting, she reportedly turned in for a sleep as anxious Seven publicity staff tried to contact her.

About 50 minutes after the tweet went public, it was taken down.

The New Daily has seen the entire tweet, which does not appear to have been written for a wider audience.

A TV source told The New Daily Bartholomew tweeted in error and the comment was meant to be a private message.

The Sunrise newsreader confirmed it was “clearly a mistake”.

She told the Herald Sun, “I was half asleep and on the other side of the world.

“My apologies to Seb and all involved. No offence was intended and hopefully none was taken.”

As to that, Nine came out swinging.

“Seb and Nine are devastated and shocked at the damaging and false nature of this personal attack on a public platform,” a network spokesperson told The New Daily.

“It’s not ideal what was said,” said Costello.

“I spent the weekend with family and it’s not ideal for them either.”

The Nine reporter is the son of former federal treasurer and Nine chairman Peter Costello. He also confirmed he will speak with lawyers about the description used by Bartholomew.

Seven refused to comment on how the tweet came to be made public and whether Bartholomew will face any action from her employers.

A network source called Costello a “protected species” because his father helped broker the current Fairfax and Nine media deal.

But the Nine source told The New Daily one of the network’s gripes with Bartholomew’s response is they feel it lacks sincerity.

Nine’s primary concern is Costello’s welfare and what he wants, which is for the whole matter to go away, the source said.

Given that, legal action is unlikely other than a possible sternly worded letter from the network’s lawyers asking for a stronger public apology from Bartholomew.

While staff are not talking on the record, Seven is “amused” by the prospect of Nine taking the Sunrise presenter to court, according to reports in The Daily Telegraph.

“There is no way in God’s earth Nine will have this play out in a courtroom,” a source said.

“They are bluffing by saying they will take legal action.”

In August 2017, Costello was embroiled in a TV mystery when he went what multiple reports called “officially MIA” without warning.

During the Barcelona terror attacks Costello disappeared from screens despite being was promoted as Nine’s foreign correspondent.

Tom Steinfort, now newsreader for the Today show, was “parachuted in to replace Costello, who was last seen on air looking not his usual clean-cut self,” according to the Herald Sun.

At the time, Nine would say nothing about Costello abandoning his post other than that he was on leave after covering stories including the Colombian arrest of Australian drug mule Cassie Sainsbury.