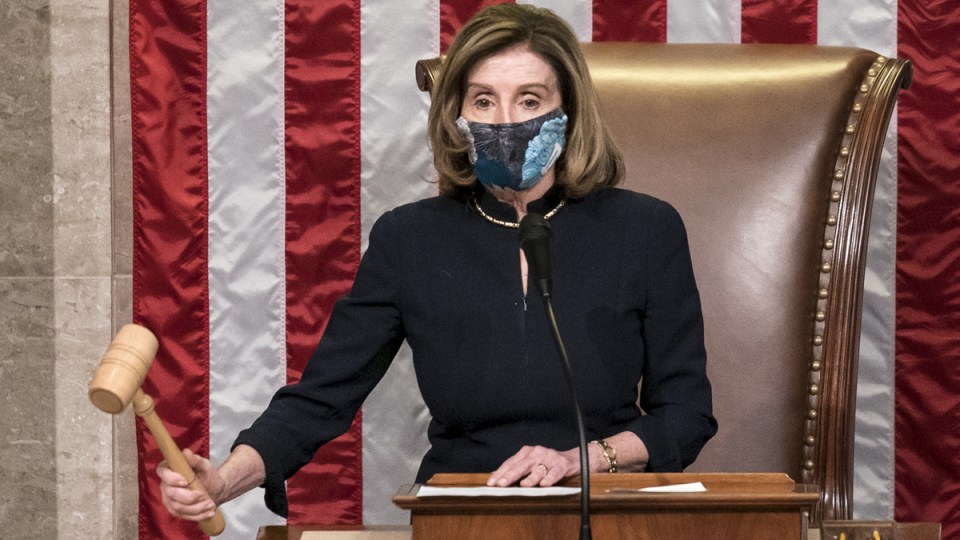 The recent terrible events at the US Capitol building and the subsequent ramifications put House Speaker Nancy Pelosi in the spotlight when she brought down her gavel last week and announced an historic second impeachment of the incumbent President Trump.

Pelosi looked calm, cool and collected as per usual, in a fabulous black dress, with a high mandarin collar and long sleeves, accessorised with a gold necklace and a smooth blow dry.

As it turns out, Pelosi wore exactly the same dress to Trump’s first impeachment, so full marks to her for some very masterful trolling.

While it can be sexist and reductive to place too much importance on what a female politician is wearing, as opposed to what she is saying, this was a very wonderful way to send a statement that this was a grave and sombre episode in the Trump presidency.

Again. Speaker Pelosi, in her chic, simple black dress was as serious as a funeral.

Fashion is a powerful social signifier and Pelosi has made some brilliant moves in her time, including the dark orange Max Mara coat and black sunglasses she wore visiting Trump at the White House in 2018, when she refused to meet one of his insane demands, looking so fierce and glamorous she has become a meme.

Max Mara is honored that U.S. House Representative @nancypelosi wore the #MaxMaraFireCoat to her recent historic meeting at the White House. pic.twitter.com/tL2QTSlCgL

Shot by young Brooklyn photographer Tyler Mitchell, the cover created some controversy, with many readers disappointed, claiming she looked too relaxed and approachable, which ironically may have been the point.

It is certainly refreshing to see a smart, beautiful, capable professional woman taking her place as the vice-president of the United States, one who is also only the second Black woman ever to have made it to the US Senate.

The appointment is historic, something Harris subtly referenced when she wore a white suffragette-inspired pantsuit and gleaming ivory satin blouse for her victory speech in November.

While what you wear may not necessarily define you, these clever sartorial messages pack a delicious political punch.

We are ushering out the Dynasty era of the Trump regime, first daughter Ivanka and her tizzy dresses cutting a swathe through global political gatherings she had no business being at, and fembot First Lady Melania in her military inspired outfits, creating divots in the White House lawns with her Louboutins for the past four years.

There are certainly more than a few memorable fashion moments from this odious regime that could make it into The Smithsonian: Ivanka’s sparkly OTT princess dress at Trump’s inauguration ball screaming ‘American Princess‘, Melania’s repugnant colonial outfits or, of course, her coup de grace, the “I Really Don’t Care Do U?” parka when she visited caged children at the US-Mexican border.

But Nancy Pelosi’s impeachment dress is a must for a museum. It is the perfect little black dress for every occasion, especially when you’re citing the President as a clear and present danger.

Kirstie Clements: Why Nancy Pelosi’s impeachment dress is a must for a museum