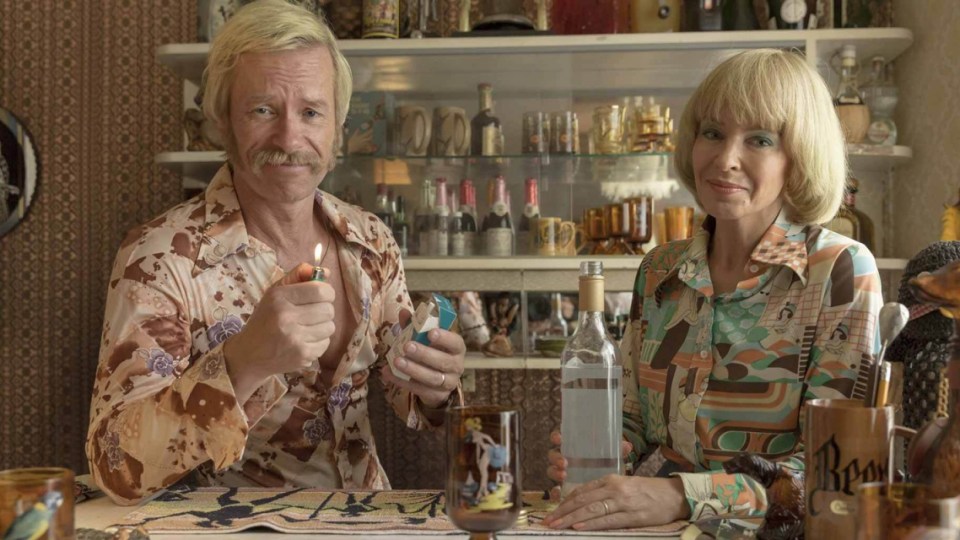 Like one giant home movie, Swinging Safari is an X-rated joke not everyone is laughing at. Photo: Becker Film Group

The Adventures of Priscilla, Queen of the Desert writer/director Stephan Elliott is back, this time raking through his frustrated teenage years in coastal suburban Sydney for raucous laughs in the 1970s-set Swinging Safari.

Not everyone is in on the joke.

“So shambolic and nowhere near as funny as it thinks it is,” was news.com.au‘s verdict.

They play awkward teenage mates Jeff and Melly, pushed together by their no-boundaries parents. They’re also semi-autobiographical stand-ins for Elliott and his long-term costume designer and childhood mate Lizzy Gardiner.

Jeff ropes half the neighbourhood into his gory Super 8-filmed home movies packed with death-defying stunts. Melly dreams of escape while sympathising with the beached whale that momentarily becomes a tourist attraction before it begins to rot.

Kids run wild getting heinously burned in the sun and setting fire to each other while videoing wild stunts gone horribly wrong – the film was originally called Flammable Children – while their parents get sozzled, swap partners at a swingers’ party, then fall out spectacularly.

It’s a full-throttle 90 minutes of sensory overload on ’70s interiors and heinous fashion, but there’s also an undercurrent of just how hard it can be for teenagers to push away from parents and find their own identity.

It’s OTT, but the ’70s were a very different time, with very different mores and a lax focus on political correctness. Elliott’s well aware of just how far he’s pushing it, but there’s always a kernel of truth to this debauched depiction. To airbrush out the rough edges of the decade would be disingenuous.

Accusing Swinging Safari of unacceptably crass humour while simultaneously praising global smash Priscilla also suggests a certain rose-tinted memory. Pearce and co in drag mode were just as fond of on-the-nose humour that flew in the face of good manners.

Packed full of nostalgic gems – edible Perkins Paste anyone? – while Swinging Safari isn’t quite as accomplished as recent Aussie comedies Ali’s Wedding or under the radar That’s Not Me, it’s no turkey like A Few Less Men or Any Questions for Ben?

Variety reviewer Richard Kuipers said it “misfires occasionally but rattles along so quickly audiences never have to wait too long before the next laugh-out-loud moment”.

Sarah Ward at Screen International said: “An energetic, irreverent, autobiographically inspired affair… the film proves a mixed bag but, given the era on display, its messiness always feels appropriate.”

Set in a time of too much money and cask wine – as narrator Richard Roxburgh announces at the start – Swinging Safari is a rip-snorting film that champions Australians’ ability not to take themselves too seriously.

And that’s exactly why it works. We’re meant to be both horrified and in hilarious fits, and on that measure Elliott has delivered and then some.

French foreign minister hails defeat of Morrison and his ‘notorious incompetence’
Tiger Woods quits PGA tournament after the worst round of his career
COVID claims 45 more lives as nationwide daily cases soar to 18,000
Volodymyr Zelensky: How war will end as Ukraine ‘breaks backbone’ of Russian army
Peter Dutton touted as next Liberal leader as he claimed victory in Dickson
‘The urgency of the situation’: WHO steps in as monkeypox cases erupt around the world
Australian Open may ‘inspire’ Will Ferrell tennis flick
Today's Stories

Is Swinging Safari the worst Australian movie ever? Not quite