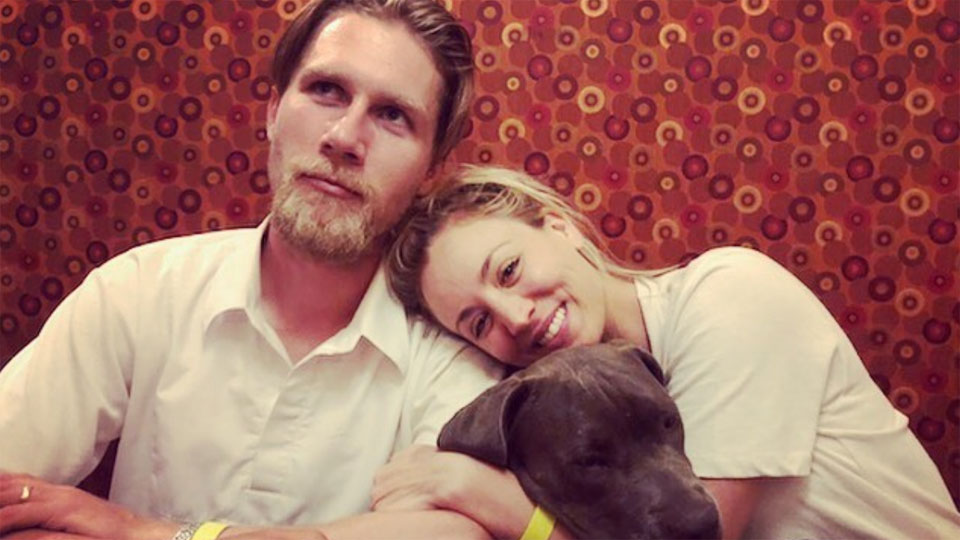 Kaley Cuoco (with husband Karl Cook and their dog) is planning to soon move their family unit into the same house. Photo: Instagram

More than a year after they wed at a horse stable near San Diego in June 2018, Kaley Cuoco and her husband Karl Cook still haven’t moved in together.

“Life is about balance,” Cuoco, who played Penny on The Big Bang Theory for 12 seasons, told Extra at a Veuve Cliquot polo event in California about not being quite ready yet to shack up with her husband.

“As of now, it’s worked out fine for us. I have no problem with it.”

She told E!News in August the couple has “a very unconventional marriage, you know” and that having space “works well” for her and Cook.

“We have different locations that we’re at a lot. We’re not together every single day.”

Having separate marital homes is a 2019 thing in Hollywood.

Gwyneth Paltrow and husband Brad Falchuk spend just a couple of nights a week together and model Ashley Graham and husband Justin Ervin – who are expecting their first baby – don’t even live in the same city.

But Cuoco did admit she and her professional equestrian husband might be merging their vinyl collections and choosing throw rugs together in the next couple of months.

“We are building our dream house, so we’re going to be in our home together very soon,” she said.

The couple already share a dog and regularly feature each other on their social media accounts, often competing in showjumping competitions.

So she can move in with Cook, the actor, 33, is selling the six-bedroom, nine-bathroom Mediterranean-style villa in Tarzana she bought from Khloe Kardashian in 2014 for $8 million.

Cuoco snapped up the house – and reportedly most of its contents – when she was still married to her first husband, tennis pro Ryan Sweeting.

They announced their split in September 2015, six months before she began stepping out with Cook, and were divorced in May 2016.

Her second husband “is my perfect match”, she told People in 2018.

“He lets me wake up in the morning and say, ‘I want to go and rescue rabbits’.”

While they might not have been living under one roof, the couple celebrated their one-year anniversary together.

After swapping gifts (she got a pink sapphire ring, he a 1911 Rolex pocket watch), they reportedly did couples yoga, took a pottery class and had Taco Bell takeaway at home.

Happy one year anniversary to my incredible other half! @mrtankcook I still can’t believe you’re mine and I’m never letting you go! 👫❤️ ( 📸 @claudcraig )

Meanwhile, as Cuoco – whose net worth is estimated at a tick over $85 million – prepares to live with her husband, she’s also landed a new professional leading man.

Game of Thrones’ Michiel Huisman has booked a role opposite her in HBO Max’s upcoming thriller The Flight Attendant.

The series, based on a novel by Chris Bohjalian (Midwives), is Cuoco’s first role since The Big Bang Theory ended in July, leaving two big questions hanging for fans.

Our final show. Our final huddle. Our final curtain call. @bigbangtheory_cbs 😭 it doesn’t get more BTS than this 📷 @cassiedendanto

As well as being executive producer, she plays the title character Cassie, who wakes up in a strange hotel bed with a dead man and no memory of what happened.

Huisman (Daario Naharis in GoT) will play wealthy businessman Alex, who gets into a tight spot and winds up hitching his star to Cassie’s.

The show is part of a multi-year deal with Warner Bros Television, which the actor signed in July.

Cuoco optioned The Flight Attendant and has been developing it since signing her initial pod deal with the studio in 2017, according to Variety.

The series is one of 12 originals given the green light by HBO Max, which WarnerMedia plans to launch in the northern spring.