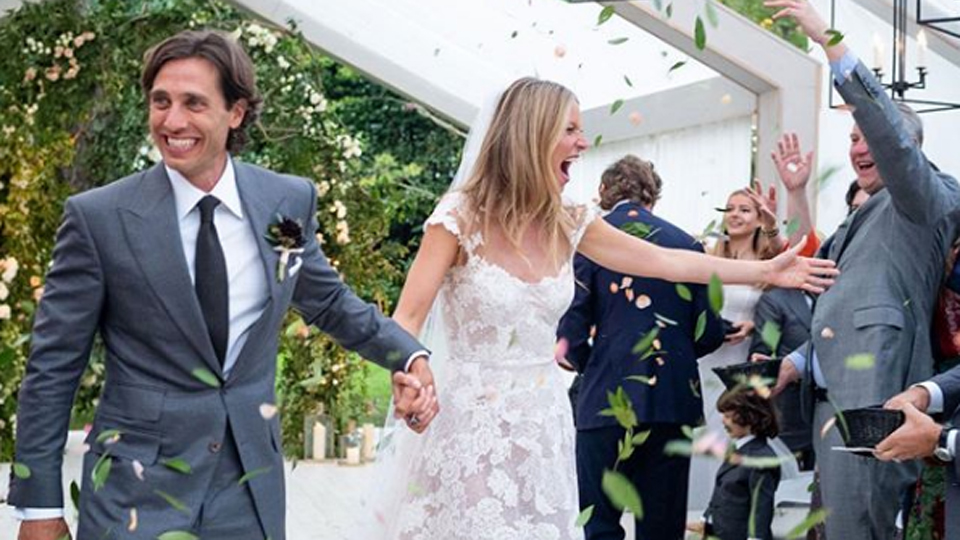 "The best day of our lives," Gwyneth Paltrow wrote of her September wedding to producer and writer Brad Falchuk. Photo: Instagram

“Men can make cookies with avocados instead of butter, too, ” she wrote.

“Let’s not put people in boxes.”

In Falchuk’s case, far from putting him in a box Paltrow isn’t even putting him under her roof a lot of the time.

While she didn’t quite go there as much as with her jade egg revelation, the Oscar winner dished on an interesting detail about her new marriage to The Sunday Times.

Turns out she and the Glee co-creator, who married in a private ceremony in the Hamptons in September after three years together, only share a house half the week.

Paltrow followed the advice of her “intimacy teacher” – there’s probably another whole story in that another day – to create a “polarity” in her marriage and keep things fresh.

So to blend their families more gradually while keeping their own independence, she and Falchuk live in separate houses in Los Angeles.

He usually stays with her four days a week, then heads back to his own place.

It’s your birthday, but it’s really feels like you are the gift. Not just to me, and to @izzyfalchuk and Brody, but to all of us who are fortunate enough to know and love you. You are my rock, my true north, my favorite person to eat with, to travel with. You are a true friend. You want only what is for the highest good. You always help me see what I can’t. I am so happy you were born @bradfalchuk I love you so much. ❤️

“Oh, all my married friends say that the way we live sounds ideal and we shouldn’t change a thing,” Paltrow, 46, said.

The actor and entrepreneur, who is busy expanding her Goop empire with a new Netflix docu-series, is no stranger to unusual domestic arrangements.

They split in March 2014 after 10 years of marriage but they have remained famously close.

“Chris is family and Brad and he, they’re like, totally friends,” Paltrow told The Sunday Times.

When she and American Horror Story producer Falchuk, 48, took their “very modern honeymoon” to the Maldives, they took not just his children Isabella and Brody and her daughter Apple, 15, and son Moses, 13.

Martin, 42, was also included in the touring party, as was his Fifty Shades of Grey actor girlfriend Dakota Johnson, 29.

“She’s very much in love with her husband and loves sharing time with everyone she considers part of her family,” a source told People.

“At this point that very much includes Dakota.”

The Avengers: Endgame actor and Johnson were snapped in April hanging out together with TV host Derek Blasberg (who couldn’t resist a dig at Paltrow and Martin’s famous “consciously uncoupling” phrase.)

“I adore her. A fantastic woman,” Paltrow told the Times of Johnson.

She feels as strongly about “crazytown handsome” Falchuk, despite not living with him.

But not everything is picture perfect in Paltrow’s stylish world.

She admitted to The Sunday Times there’s one domestic horror that interrupts her beauty sleep.

“I can’t sleep at night if there are dishes in the sink,” she said.

As to whether any hot flushes are also keeping her up, Paltrow admitted she has signs of menopause but declined not to give them any air time other than to say, “I think there is something so incredibly powerful about getting to that stage”.

She has one regret, she told The Sunday Times.

“I had to turn 40 to start getting my head out of my ass … I can only imagine in my fifties how much better it is all going to get.”