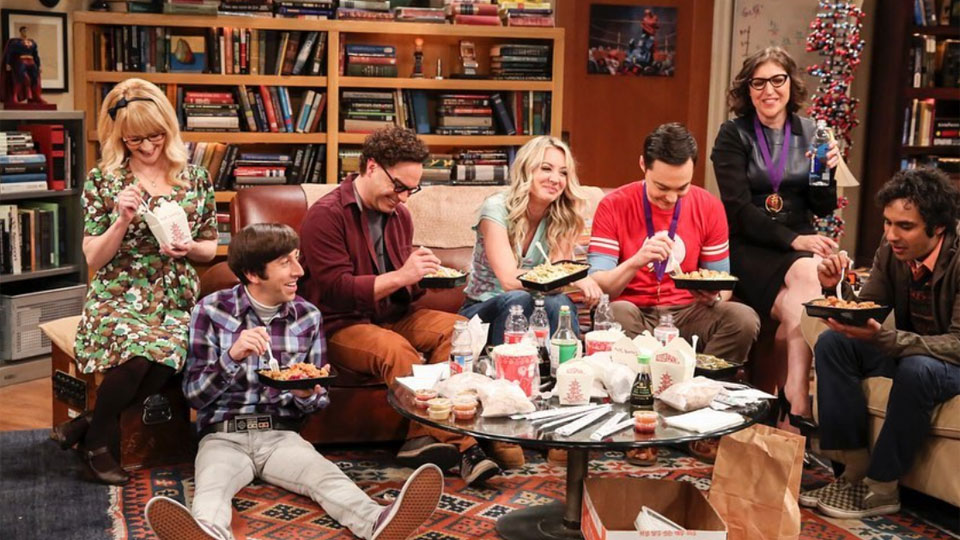 Amid all the neatly-wrapped up strands in The Big Bang Theory’s two-part finale on Nine on Wednesday, two big questions were left unanswered.

After 12 seasons, a zillion bazingas, too many ugly sweater vests and one broken lift, viewers never found out Penny’s last name.

She has been called Hofstadter since her wedding to Leonard (Johnny Galecki) last season, but that’s his name.

“I kind of love that we’ll never know,” Kaley Cuoco (Penny) said of the non-reveal in The Change Constant/The Stockholm Syndrome.

OK, let’s roll with that hanging mystery being semi-intriguing, but the other outstanding question about one of the most resilient comedies in television history is regressive and annoying.

It all ended with a Big Bang. ❤️ pic.twitter.com/QQ7T4A0EKV

Why did Penny end up pregnant?

Her long-time anti-child stance was an underlying platform flying in the face of many female sitcom characters, who want the white picket fence and kids.

During the final season of The Big Bang Theory, she again reminded Leonard pointedly she didn’t want children, which led to a plot line about him being a sperm donor.

Then – wow – she got pregnant, fulfilling her husband’s vision, not hers, for babies that would be “smiutiful”, smart and beautiful.

As Vulture put it, The Big Bang Theory (whose prequel Young Sheldon has been picked up for two more seasons) has “always been studiously apolitical” and stuck to a “superficial neutrality”.

Its resonance was more its championing of nerd culture and brains as sexy. Science’s social issues including climate change and health care access were avoided for low stakes in-jokes.

So the Penny pregnancy plot point gave the finale not just unfortunate political relevance in light of US legislation aimed at outlawing abortion.

It also was a smug betrayal of what had been the pilot light of a modern woman with choices, and came off as tone deaf that Penny’s right to decide was waved away as an “accident”.

She was happy, she said, in what show creator Chuck Lorre said “honored” Penny. If that’s true, fabulous. But it needed explanation.

“The best way to honour a character who said many times she doesn’t want to be a mother is, it’s to not make her be a mother,” tweeted one viewer.

Said another, “What did Penny know about what she wants? She’s just a woman.”

The moment we found out Leonard was going to be a father! Happy Father’s Day! ❤️ Click the link in the bio to stream the 2-part series finale! #BigBangTheory

Overall, the bittersweet finale was in sync with how The Big Bang Theory has been since its 2007 premiere: Uneventful even when things were happening.

Other recent bow outs Game of Thrones and Veep were what was called “referendums on themselves”, ending with death, decisions and devastatingly realised ambitions.

But even with its big reveals, CBS’ prime-time smash – in its heyday it drew more than 20 million viewers – ended with more a muffled noise than the cataclysmic event of the show’s title.

As everyone saw coming, Sheldon (Jim Parsons) and Amy (Mayim Bialik, who suddenly got a makeover after resisting fashion all these years) landed the Nobel Peace Prize and flew the gang to Stockholm.

Friends like these come once in a lifetime. ❤️ pic.twitter.com/IgoOYNRdqx

Taking the mic gave Sheldon the chance to give “the greatest group of friends anyone ever had” a shout out, showing unusual humility: “I want you to know, in my way, I love you all.”

It put into words what the finale meant: That the characters are still cool uncool, but have evolved.

Eagle-eyed fans would have spotted the fabulous cameo at the Nobel ceremony. While Raj was still without a life partner, he did land Buffy (Sarah Michelle Gellar) as his date for the night.

It was telling that the audience reacted more to seeing the building’s lift finally fixed than to the pregnancy news. Small miracles, big success.

“What really felt right was to not put a period [full stop] at the end of the sentence,”Big Bang’s co-producer Steve Holland told The Sydney Morning Herald of the As You Were end.

“It felt good to us that the next day, even though you’re not going to see it, these characters were going to get up and go to work together and their lives were still going on.”