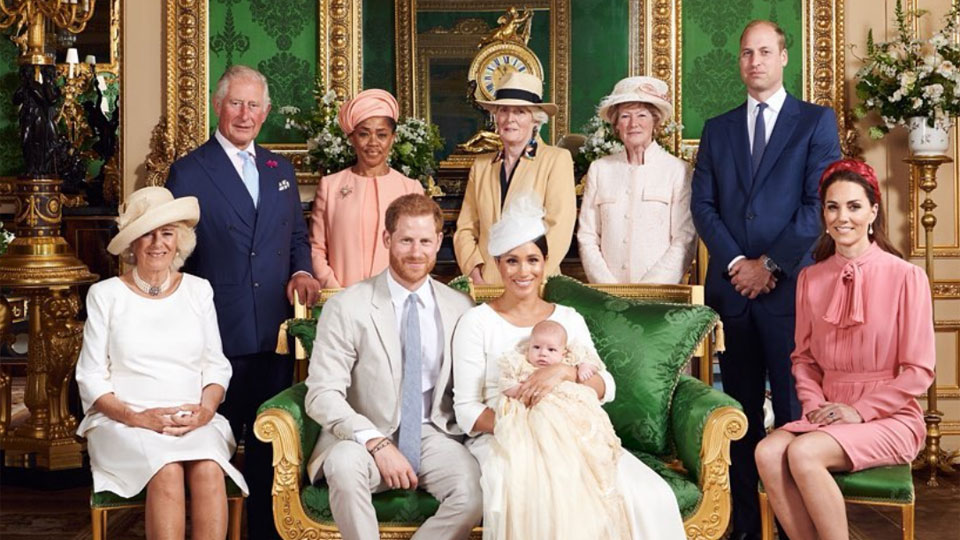 Meghan Markle and Prince Harry have shared two photos from their son Archie’s christening after being criticised for the privacy of the Windsor Castle ceremony.

Eight weeks to the day since his birth at The Portland Hospital in London, a placid but awake Archie was seen in full for the first time in his three photo outings.

Taken at the castle’s Rose Garden, the most personal photo – in arty black and white, a signature of his parents’ social media posts – shows the seventh in line to the throne in his mother Meghan’s arms.

The other photo is a more traditional formal group portrait in the castle’s Green Drawing Room. The newly-christened Archie Harrison Mountbatten-Windsor is on his mother’s lap.

Also in the family snap: the Duchess of Cornwall, the Duke and Duchess of Cambridge and Princess Diana’s sisters Lady Sarah McCorquodale and Lady Jane Fellowes.

Taken by Harry and Meghan’s wedding photographer Chris Allerton, the snaps were posted to the Sussex Royal Instagram account around 4.30pm (UK time) on Saturday.

Within their first hour, they had been liked nearly one million times.

“The Duke and Duchess of Sussex are so happy to share the joy of this day with members of the public who have been incredibly supportive since the birth of their son,” said the post.

“Their Royal Highnesses feel fortunate to have enjoyed this day with family and the godparents of Archie.”

This morning, The Duke and Duchess of Sussex’s son, Archie Harrison Mountbatten-Windsor was christened in the Private Chapel at Windsor Castle at an intimate service officiated by the Archbishop of Canterbury, Justin Welby. The Duke and Duchess of Sussex are so happy to share the joy of this day with members of the public who have been incredibly supportive since the birth of their son. They thank you for your kindness in welcoming their first born and celebrating this special moment. Their Royal Highnesses feel fortunate to have enjoyed this day with family and the godparents of Archie. Their son, Archie, was baptised wearing the handmade replica of the royal christening gown which has been worn by royal infants for the last 11 years. The original Royal Christening Robe, made of fine Honiton lace lined with white satin, was commissioned by Queen Victoria in 1841 and first worn by her eldest daughter. It was subsequently worn for generations of Royal christenings, including The Queen, her children and her grandchildren until 2004, when The Queen commissioned this handmade replica, in order for the fragile historic outfit to be preserved, and for the tradition to continue. Photo credit: Chris Allerton ©️SussexRoyal

As to those godparents, for now their identity remains a mystery.

Buckingham Palace said the decision not to name them at this point was their wish, which will be a moot point when Archie’s baptism certificate becomes a matter of public record.

Kate Middleton, in pink Stella McCartney, arrived for the christening in a Audi station wagon driven by husband Prince William. Their children Prince George, 5, Princess Charlotte, 3, and Prince Louis, 1, didn’t seem to be with them.

Also a no-show was the Queen, who has already set off from London to Scotland for her annual northern summer holidays.

The new parents chose the location close to their Frogmore Cottage home because they “wanted an intimate, peaceful setting in a place with such a special connection to Her Majesty,” a royals source told People.

Created for Queen Victoria between 1840 and 1847, the private chapel was destroyed by the disastrous Windsor fire in 1992 and rebuilt two years later with modern updates.

He also baptized Meghan in a secret ceremony at the Chapel Royal at St James’s Palace in London about two months before she wed Harry in May 2018.

Archie, who was born on May 6, wore the handmade replica of the royal christening robe worn by Queen Victoria’s children.

Sewn by the Queen’s dressmaker Angela Kelly, it was seen on Prince George, 5, Princess Charlotte, 3, and Prince Louis, 1, at their christenings.

Louis wore the gown almost exactly a year ago, at his July 9 big day at St James’ Palace. Newlyweds Meghan and Harry were guests.

Traditionally royal children are baptized in the 1841 Lily Font with water from the River Jordan, but it is is not known if Archie followed suit given his parents’ insistence on privacy.

Despite the media blackout and no public appearances from any royals, fans still flocked to Windsor to support the Sussexes.

Anne Daley, 63, drove from Wales with a home made celebratory cake and her dog Camilla, who was dressed in christening garb. They pulled up in Windsor at 5am.

While she loves “everything about the royals”, Ms Daley was “very hurt” by Meghan and Harry’s decision to deny the public the sight of royals and guests arriving for the event.

“One minute they want to be royals, the next they don’t,” Ms Daley said.

“That baby is Princess Diana’s grandson. A lot of people don’t like to see them hang around the fake celebrities. Forget Hollywood. They are royal.”