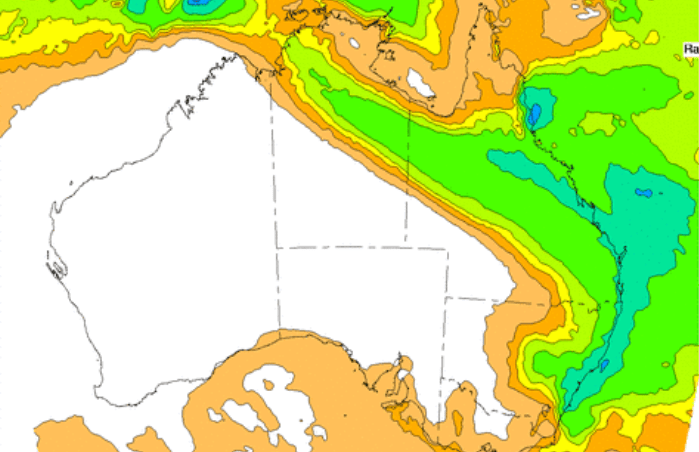 The warning comes a week after forecasters declared the wet, La Nina weather pattern was over. Photo: BoM

Sydney residents are bracing for the possibility of more flooding this week as a month’s worth of rain is forecast to fall over the city in the next five days.

The Bureau of Meteorology’s Hugh McDowell told the ABC on Thursday that falls of 60-170 millimetres were possible from tomorrow until next Tuesday.

“We’ve seen a very dry month through June but that’s all going to change as we go into July,” Mr McDowell said.

People have been warned to consider their travel plans for the school holidays and monitor forecasts and warnings.

Mr McDowell said the period from Saturday through to Monday and Tuesday was of the most concern.

The expected downpour is the result of a weather system moving up the NSW coast.

Mr McDowell said next week’s rain was tipped to exceed the average total for July, which stands at 100 millimetres.

“In context, that’s more than a month’s worth of rain that you’d see in an average month for July,” he said.

Sydney has already experienced flooding in April this year as part of a series of deadly deluges that devastated parts of northern NSW and southern Queensland.

Forecasters earlier this week warned that unseasonably heavy rain forecast for Queensland and the Northern Territory would spread across much of east of Australia.

Forecaster Weatherzone said a stream of tropical moisture would produce rain over a broad area of the NT and Queensland – possibly delivering several months’ worth of dry-season rainfall in some areas.

It comes with northern Australia in the middle of its dry season.

Most of north-west Queensland and the northern NT generally get less than five millimetres of rain during July – but not this year. Modelling shows up to 100 millimetres could fall in the coming week.

“A few showers will develop over the NT and far-west Queensland on Tuesday and Wednesday as a cloudband starts to build across northern Australia,” Weatherzone said on Monday.

“Rain will become heavier and more widespread between Thursday and Saturday as the cloudband slowly drifts further east.”

The wet weather forecast comes just a week after the Bureau of Meteorology officially declared this year’s La Nina system over, after months of it helping to drive large rainfalls across Australia.

“But we also are aware that the models are suggesting we could go back into La Niña later in the year, and hence we’ve moved to La Niña watch,” BOM’s head of long-range forecasts, Dr Andrew Watkins, said.

There is about a 50 per cent chance of a La Niña event forming again during 2022.