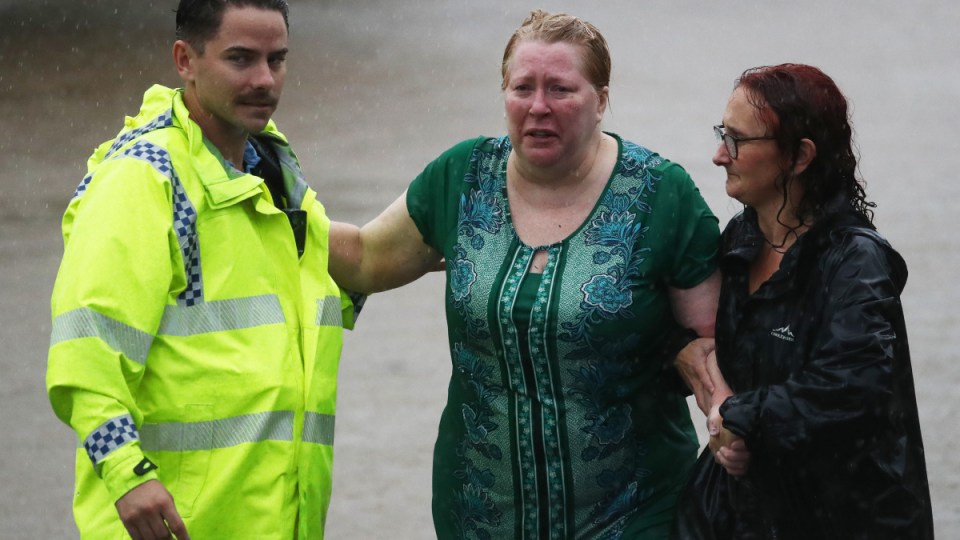 Hundreds of people have been rescued in the flood-hit area, with hundreds more still stranded. Photo: AAP

Thousands of people have been ordered to leave their homes as devastating floods hit northern NSW, while a grim discovery takes the Queensland death toll to eight lives lost.

Surf lifesavers on Monday found the bodies of a man in his 50s and his dog in a submerged car in the Currumbin Valley after they apparently drove into floodwaters overnight, police said.

As well as eight deaths, up to three people are missing in Queensland’s “fast and furious” floods, which have damaged thousands of homes and businesses, after a year’s rain fell on parts of the south-east.

Police hold “grave concerns” for two men missing in Brisbane and to the north at Glen Esk, while they’re also looking for a car reportedly swept away at Yatala.

As the south-east Queensland floodwaters appear to have peaked, the crisis has moved south. NSW Emergency Services Minister Stephanie Cook said hundreds of residents in the town of Lismore remained trapped as rivers rose to record levels.

Some people – including pregnant women, the elderly and young children – are stranded on rooftops. There are also reports of people clinging to furniture for safety in the raging waters.

The entire Lismore CBD is under water after days of heavy rain that led to the Wilsons River breaching its levee overnight. In some areas, flooding is up to roof awnings.

“We are presently experiencing very dangerous rainfall and life-threatening flash flooding in north-east NSW. My heart goes out to all families, individuals, communities and our volunteers up on the North Coast at the moment. We are seeing the vision of people stranded, people stuck on roofs of homes,” Ms Cook said.

“Our emergency services are doing everything they can to get to you as quickly as they can. This will continue for several hours.”

She said the Wilson River was at record levels at Lismore – well above the 12.17 metres it reached in 1954.

“The river is presently at 14.36 metres and continuing to rise,” she said.

Ms Cook said teams from every emergency agency in NSW, as well as the Australian Defence Force, were responding.

“There is no gilding the lily here. This is a natural disaster of unprecedented proportions,” she said.

Ms Cook urged anyone in the 12 northern NSW regions where evacuation orders have been made to be prepared to leave at “very, very short notice”. The orders cover about 16,000 people.

There are also another six regions, home to about 14,000 people, where evacuation warnings have been issued.

Rain was continuing to fall in the region on Monday afternoon, although it was expected to ease later in the day.

Lismore Mayor Steve Krieg said earlier hundreds were still trapped amid the flooding in what he called a “dire situation” for the regional city.

“We’re doing our absolute best to co-ordinate everything as best we can with the resources that we have to get everyone out of the low-lying areas,” Mr Krieg told ABC TV on Monday afternoon.

It is something that no one in this area has ever seen before.”

Prime Minister Scott Morrison said federal rescue efforts in Lismore had been hampered by the extreme weather, which was causing problems accessing the town from the air.

“We are somewhat encumbered by the weather system, which does frustrate aerial operations for evacuation,” Mr Morrison said.

He planned to meet on the “very distressing situation” with the government’s emergency management authority in Canberra on Monday, before further discussions with the national security committee of cabinet on Tuesday.

Premier Dominic Perrottet said there had already been more than 500 flood rescues, and 927 requests for assistance in the past 24 hours.

“Simply because your community has not flooded in the past does not mean that it will not flood over the course of this week,” he said.

“The advice that we have received is we would expect things to get worse.”

Lismore had 181 millimetres of rain in half an hour on Monday and remains the focus of the rescue efforts.

Twenty kilometres north of the town, at Rocky Creek Dam, the SES is directing people below the dam to evacuate to higher ground as “uncontrolled water is spilling over”, amid fears it could burst its banks.

The emergency is also widening, with the Bureau of Meteorology issuing multiple major flood warnings for north-eastern NSW including the Tweed, Richmond, Wilsons, Clarence and Brunswick rivers, and Marshall Creek.

The area affected is vast, with flash-flooding to continue for parts of the northern rivers and mid north coast, including Coffs Harbour and Bowraville, on Monday.

“Rain will continue today and gradually ease in the far north later this afternoon and later this evening for parts of the mid-north coast as the low moves a little further south,” the BOM said.

The SES ordered the town of Mullumbimby to evacuate on Monday morning, with the area threatened by rapidly rising floodwaters from the Brunswick River.

One man died when his Land Cruiser was carried away by floodwaters on the Central Coast, north of Sydney, on Friday and another remains missing in floodwaters in Lismore.