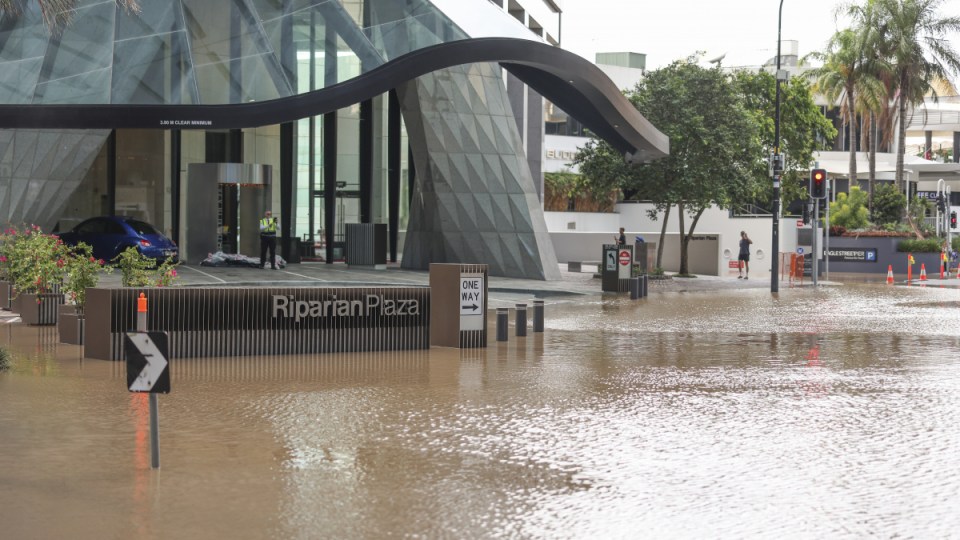 Flooding on Creek Street in the Brisbane CBD on Monday morning. Photo: Getty

Residents on the Fraser Coast north of Brisbane have been left stranded at home as flood waters engulf bridges and separate towns.

Major flooding continues in the Gympie, Maryborough and Sunshine Coast regions after widespread rainfall saturated the area with totals of 200-600 millimetres recorded in the past four days.

Eight people have died and up to three people are missing in Queensland’s “fast and furious” floods, which have damaged thousands of homes and businesses, after one year’s worth of rain fell on parts of the south-east.

Surf lifesavers found the bodies of a man in his 50s and his dog in a submerged car in the Currumbin Valley on Monday after they drove into floodwaters overnight, police said.

Another seven people have died in the catastrophic floods, which have impacted more than 18,600 homes and more businesses.

Police hold “grave concerns” for two men missing in Brisbane and to the north at Glen Esk, while they’re also looking for a car reportedly swept away at Yatala.

Up to 3600 homes in Gympie could be affected by the rainfall as some isolated areas of the region received more than 1000 millimetres over the period.

In Maryborough, business operators have bunkered down at home as flooding on the Mary River has inundated pedestrian bridges linked to the CBD.

“Everyone’s pretty much reluctantly settling into the fact that we’re going to go through it again. There’s not much we can do about it,” Doug Cuzens from the Maryborough Services Memorial Bowls club said.

“Where I am at the moment I can’t get out because Schultzs Bridge has gone under. It’s running over the top of the bridge.

“We’re all optimistic. Hopefully we don’t go getting an 11-metre flood or an 11-and-a-half metre flood that people think could possibly happen, but you just don’t know.”

The town’s levee was withholding the Mary River at 9.8 metres on Monday afternoon, but Fraser Coast Mayor George Seymour said it was expected to rise further.

The Bureau of Meteorology estimated the flood peak in Maryborough would be similar to that observed during Tropical Cyclone Oswald in 2013.

Mr Seymour said CBD businesses should be safe as the levee protected up to 11.3 metres, but many residences would be affected if the level rose above 10.7 metres.

It is the second time in six weeks the town on the Fraser Coast has erected its flood levee after catastrophic flooding forced an evacuation of the CBD in January with as many as 100 businesses affected.

There is major flooding on the Brisbane, Bremer, Lockyer, Logan and Albert, Mary, North Pine, Noosa and Maroochy rivers after a year’s worth of rainfall in some areas in one or two days.

Premier Annastacia Palaszczuk said the intensity of the downpours and severity of the floods were not expected.

On the Sunshine Coast, Mayor Mark Jamieson said residents were well into the recovery stage after the area received more than 1000 millimetres of rainfall in the past week.

In the 24 hours to 9am Sunday, rainfall totals of 150-350 millimetres were recorded in the Noosa and Maroochy catchments, with a further 20-100 millimetres observed since.

He said the number of interstate travellers left stranded on the Sunshine Coast was dwindling as the region’s airport was operational again.

But Mr Jamieson said the Sunshine Coast, like large parts of the south-east, would need plenty of recovery assistance.

“The funding that will be required through the federal and state governments will run into the many, many tens of millions of dollars,” he said.

On Monday, the federal government announced disaster payments for adults and children accessible through the same services used throughout the COVID-19 pandemic.

“Our payments are $1000 per eligible adult and $400 per eligible child, and that is available through Services Australia Disaster Assistance Phone Line,themn” Prime Minister Scott Morrison said on Monday.

Who was the King? How Elvis Presley devoted his life to a consuming passion
Qld death toll rises as ‘entirely unprecedented’ flooding causes crisis in NSW
Today's Stories