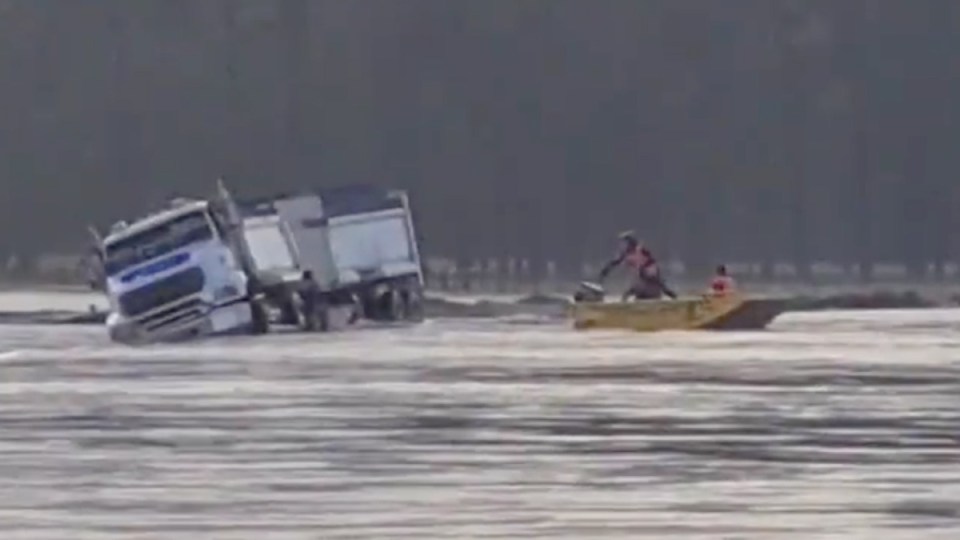 This truck was one of numerous vehicles to be trapped by floodwaters. Photo: Twitter

Flood rescues were under way on the NSW mid-north coast on Thursday after more than 300 millimetres of rain fell overnight.

The State Emergency Service was inundated with calls about 2am, mostly from Corindi, 36 kilometres north of Coffs Harbour.

“The amount of rainfall just hasn’t been able to get away and that entire Corindi floodplain area has come up rapidly and caught a lot of people unawares at that hour of the morning,” SES Coffs Harbour deputy unit commander Martin Wells told the ABC.

There were also concerns after a freight train carrying dangerous goods derailed after hitting a stretch of washed-out track near Nana Glen.

Multiple wagons of the 1500-metre freight train, which was travelling from Brisbane to Melbourne, derailed.

One locomotive ended up in a paddock, although the other two remained upright.

One of the locomotives leaked up to 8000 litres of diesel and 16 carriages have jack-knifed, four of which were stuck in flood waters.

A small fire in one carriage was extinguished by the train driver, who was not injured, Fire and Rescue NSW said.

By later on Thursday, FRNSW said it had stemmed the fuel spill and all carriages with dangerous goods were upright. It expected clearing the damage to take days.

Mr Wells said there had been eight calls for help in one Corindi street.

“We’ve had families sitting on roofs in Corindi awaiting assistance and it’s just been a real challenge to get to everyone.”

By midday, about 15 flood rescues were still active and the Westpac Rescue helicopter had been called in to help.

Upper Corindi resident Jayde Mckenzie said her home was inundated by flood waters with her four children in the house.

“We had to get as much stuff as we could and stood on the kitchen bench. We didn’t have time to get out of the house,” she said.

“It was very terrifying, I don’t think I’ve ever been as scared in my life.”

“It’s really disappointing that drivers continue to head through these flood waters when it’s clearly impassable,” he told radio 2GB on Thursday.

“It’s putting theirs and their family’s lives at risk and of course our teams that are heading out to rescue them from those situations,” he said.

Actor Russell Crowe, who has a property in the region, said there had been “big rains overnight”.

The Bureau of Meteorology said moderate to heavy rainfall associated with thunderstorms fell across the Orara River catchment in the Coffs Harbour region, also affecting the towns of Glenreagh and Coutts Crossing.

The SES warned Glenreagh Village might become isolated on Thursday if river levels continued to rise. Residents should prepare for possible isolation, it said.

It was also likely that roads and bridges to and from Glenreagh would be impassable once the river exceeded 7.4 metres at the Glenreagh gauge.

The Kremnos and Kungala area might be isolated and residents were warned to prepare as it was likely all evacuation routes from those towns would be impassable once the river exceeded 5.8 metres at the Glenreagh gauge.

The SES said people should refrain from driving or walking through flood water, stay out of rising water and seek refuge in the highest available place.