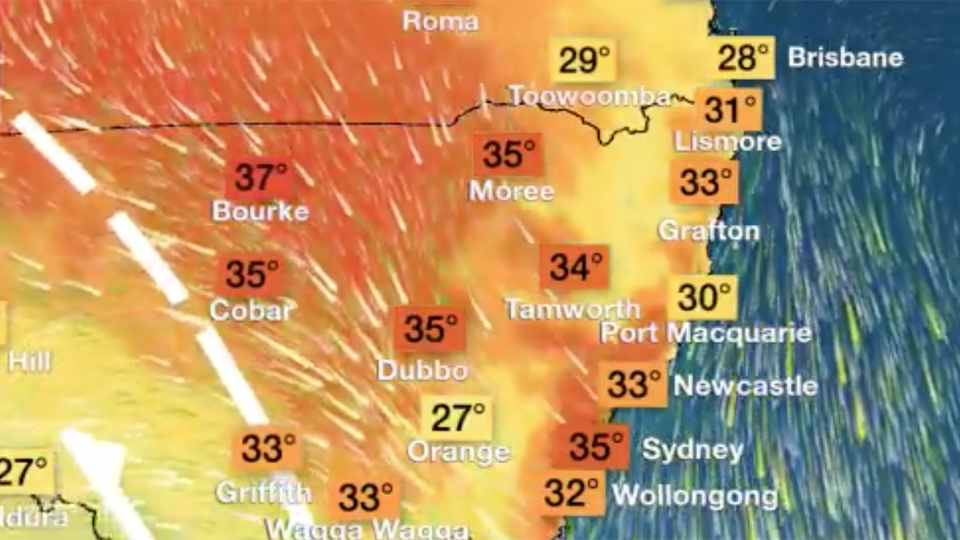 Forecast highs for NSW at midday on Friday. Photo: Twitter/BOM

Sydneysiders are being urged to drink plenty of water and not leave children, the elderly or pets in cars with the mercury forecast to hit 36 degrees on Friday – 14 degrees above the city’s October average.

The Bureau of Meteorology NSW said 36 degrees was also expected in Penrith in the city’s west on Friday, 10 degrees above the October average.

NSW’s blast of heat comes after two days of scorching temperatures in South Australia and Victoria. A cool change moved through those states late on Thursday and early on Friday, but is not expected to make much impact in NSW until overnight on Friday.

Parts of South Australia are having their hottest October day in more than 100 years as severe thunderstorms and dust storms sweep across the state: https://t.co/sjLKWIbtRf

Forecaster Weatherzone said the temperature in Melbourne was still 30 degrees at 8pm on Thursday, following the city’s hottest day October day in four years. The cool change arrived in Melbourne about 8am on Friday.

For Sydneysiders, Friday will be their hottest day since March 6. Weather bureau forecaster Helen Kirkup said strong north-westerly winds would keep the cooling sea breeze away from the city and coastal areas until later in the day.

“Those north-westerly winds will continue all day and that will keep the temperatures up right across Sydney,” she said.

“But Bondi has a top of 33 degrees, which means they should see a north-easterly later this afternoon.”

Feeling like Summer, already. Over 38C in the state's west today. Eastern parts are in for well above average temps tomorrow – Sydney city set for 35C, Penrith 37C. A cold front will chase away the heat on Saturday for all but those in the North East.https://t.co/vIuVWKSPwB pic.twitter.com/1BUOtqiie0

Emergency services said people should keep cool and take care of those at risk of heat-related illnesses.

“Motorists are reminded it is never OK to leave children, the elderly, or pets unattended in a car – even with the air-conditioning running. Not only is this dangerous, it can be deadly,” NSW Police said.

There are total fire bans in place for the NSW far south coast, Central Ranges, greater Hunter and in the state’s north-west.

At 10am, there are 46 bush and grass fires burning across NSW with 16 yet to be contained. Today's hot, dry and windy conditions are expected to worsen tomorrow and bring more widespread fire activity. Make sure you report any unattended fires to 000. #NSWRFS #NSWFIRES pic.twitter.com/zUHc6w1EI7

The Bureau of Meteorology is warning the gusty cool change will bring damaging winds of up to 90km/h when it arrives.

“Warm, dry and windy conditions will result in elevated fire dangers for the eastern parts of the state,” it said.

He said this was already double the 200,000 hectares burned throughout the last two fire seasons combined, with two lives lost and more than 100 homes destroyed.

“We need people to take note that this is no ordinary fire season,” he said.

“Without any significant rainfall on the forecast, there is the real potential for this to be very long, protracted and dangerous.”

A maximum of 32 degrees has been forecast in Sydney on Saturday. The mercury is expected to drop on Sunday with a maximum of 24 expected.

Millions set to swelter ahead of dangerous cool change