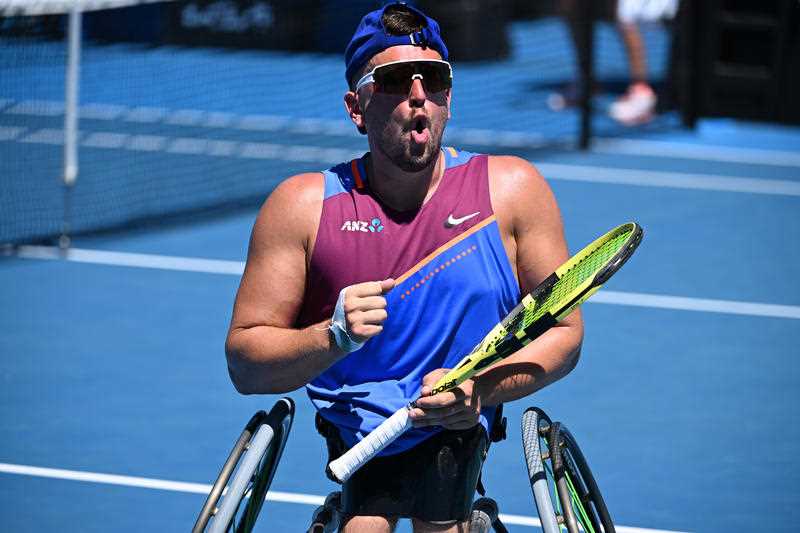 Australian quad wheelchair champion Dylan Alcott is into the Australian Open final after emerging triumphant from his semi-final contest against Britain’s Andy Lapthorne.

The world No.1 and defending champion soared 6-3 6-0 in front of a sizeable crowd on Tuesday – onlookers keen to catch a glimpse of superstar Alcott in his last outing at the tournament.

Lapthorne knew Alcott would have the advantage of the crowd on his side, earlier tweeting a comparison of himself to DC villain, The Joker.

“So I guess this is me today then, Australia?” he jested.

The ever-enthusiastic Alcott was beaming cheek-to-cheek on court, often echoing the crowd’s sentiment.

Lapthorne got off to a great start, cracking the ball cross-court, way out of Alcott’s reach.

But Alcott soon found rhythm, forcing Lapthorne to defend at the baseline while beautifully slotting a sneaky volley just over the net.

Unfortunately for him, the tactic misfired occasionally, ball meeting net instead and falling agonisingly short.

The second set was a far different story, with Alcott achieving a clean sweep 6-0.

As fellow Aussie Alex de Minaur perhaps had hoped the previous day, the relentless heat seemed to work in Alcott’s favour, with Lapthorne tiring early in the second set.

Alcott will face the Netherlands’ Sam Schroder in Thursday’s final, hoping to add to his record of 16 major singles titles.

But he said he would be thrilled, regardless of the outcome,

“It would be unbelievable, but it wouldn’t be everything,” Alcott said.

“I’m the luckiest guy in the world [regardless]. I’m going to go out there and enjoy every second of it.”

Tuesday could be a red-letter day for Alcott, who is also nominated for Australian of the Year. That announcement is made in Canberra at 7.30pm (AEDT).

“I think I have no chance,” Alcott said.

“To be nominated is unbelievable … What a huge honour.”