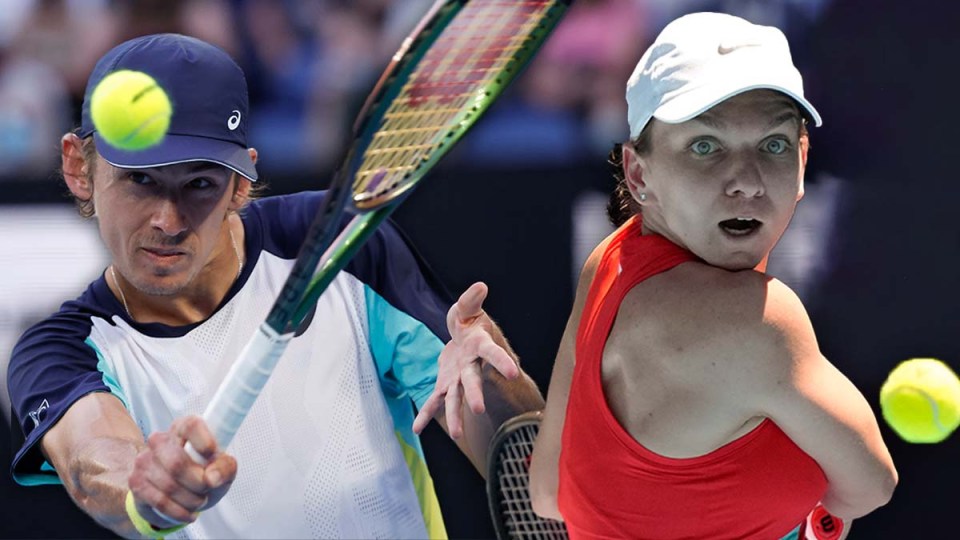 Halep has made the finals in five of her 11 runs at the Australian Open, and the former world No.1 had hoped to repeat that in 2022.

But Cornet instead found her way to her first ever grand slam final in her 17th Australian Open and 60th consecutive main draw entry.

An emotional Cornet was overwhelmed after her drought-breaking victory.

“You know how long I’ve been waiting. Sorry I’m so emotional,” she said.

“It’s never too late to try again … To go to my first QF is just a dream.”

Both players seemed to struggle under the harsh sun during the match, but Halep appeared to be particularly fatigued.

The Romanian struggled to lift her game in the heat, keeling over at the close of nearly every point, retreating under the shade in every opportunity.

Cornet brought her best to the first set, breaking Halep in her second service game.

The second set was neck-and-neck, Halep digging deep to endure the conditions.

Halep refused to give in, claiming the next five sets and the second set in an incredible change in form.

The pressure became all too much for Halep in the third set.

Although she was able to fend off multiple match points, Halep began to throw her racquet around and batter the net on multiple occasions in clear frustration.

Cornet spoke of the trying conditions on court.

“We were both dying on court … My vision was not clear anymore, my hands were shaking.”

The two had reminisced about how Cornet would have played Dokic in the 2009 Australian Open, had Cornet gone through to the quarter-finals.

“I know how much you’ve been through,” Cornet said.

“You just made me cry,” Dokic remarked.

De Minaur will take to Rod Laver Arena under the scorching Melbourne sun, with temperatures rising to 32 degrees at Melbourne Park.

The blistering temperatures may work against 11th seed Sinner, who grew up in far-northern Italy where his parents worked at a ski lodge.

The day-time slot led commentators to believe the young Aussie’s team might have requested an early game, hoping Sinner would melt in the sun.

De Minaur may need the weather on his side. Sinner has proven too good for the Aussie in their previous encounters.

He beat de Minaur in straight sets at the only other times they have clashed, in 2019 and 2020, and could very well do it again.

Both players are previous grand slam quarter-finalists. De Minaur reached the US Open quarter-final in 2020 and Sinner the French Open in 2020.

With both undoubtedly keen to repeat their success, and de Minaur the only remaining local men’s singles hope, it’s shaping up as a riveting contest.

Sanders storms through to doubles quarterfinals

It’s a different scene in the doubles, where Nick Kyrgios and Thanasi Kokkinakis aren’t the only Australian pairing exceeding expectations this year.

Rockhampton-born Storm Sanders has continued her strong form alongside American partner Caroline Dolehide, firing into the quarter-finals on Monday.

Sanders entered the match with confidence, already having snared a doubles title this year with partner Ash Barty at the Adelaide International.

Sanders’ current Australian Open run marks the first time she has progressed past the tournament’s second round.

The duo will either face first seeds Barbora Krejcikova and Katerina Siniakova or Americans Danielle Collins and Desirae Krawczyk in the quarter-finals.