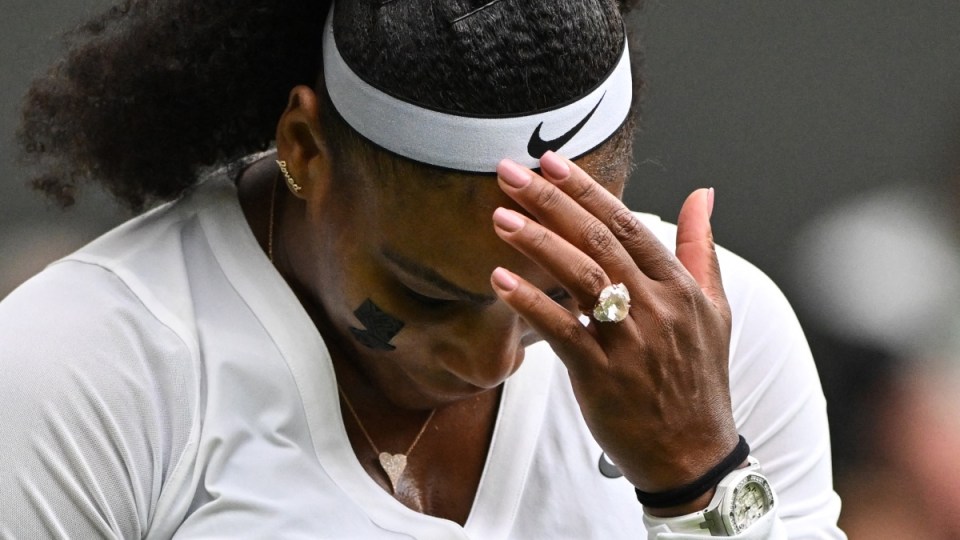 Seven-time champ Serena Williams has been knocked out in the first round at Wimbledon. Photo: Getty

Serena Williams says she does not know what the future holds after her first round Wimbledon defeat, but the thought of playing in the US Open later this year still motivates her.

Williams, 41 in three months, had not played a singles match since injuring her hamstring at Wimbledon last year, only returning to doubles action earlier this month.

Sanguine, and maybe a little shell-shocked, she said wryly of her exit: “It is definitely better than last year.

“It definitely makes me want to hit the practice courts because when you’re playing not bad and you’re so close. I feel like that it’s ‘OK, Serena, you can do this if you want.’

“I think physically I did pretty good. I feel like in just those key points, winning some of those points, is something mentally that you have to have. I did pretty good on maybe one or two of ’em, but obviously not enough.”

Tan, a 24-year-old ranked 113th in the world, made her Wimbledon main-draw debut against Williams on Wednesday (Australian time).

Williams has been coming to Wimbledon since 1998, when Tan was still a babe in arms. She has made 11 finals and won seven.

But you would never have known this from the contest as the Frenchwoman rose to the occasion, beating Williams 7-5 1-6 7-6 (10-7).

Afterwards Tan was on the verge of tears.

“I don’t know what to say. I have watched so many times on TV. For my first Wimbledon it is ‘wow’, just ‘wow’,” she said.

The loss leaves Williams still one major short of matching Australian Court’s record 24 grand slam titles and, as she turns 41 in September, running out of opportunities. But she still has one eye on Flushing Meadows.

“When you’re at home, especially in New York, and the US Open, that being the first place I’ve won a grand slam, is something that’s always super special. Your first time is always special,” she said.

“There’s definitely lots of motivation to get better and to play at home.

“I think if you’re playing week in, week out, or even every three weeks, every four weeks, there’s a little bit more match toughness.

“But today I gave all I could do. At some point you have to be able to be OK with that.”

Williams’ rustiness showed at the start when she lost the first two games, but won the next four.

Tan then broke back and held for 4-4, then broke again at 5-5 before serving out to claim the set.

Tan had game point on Williams’ serve at the start of the second set, but the seven-times Wimbledon champion held and then won a 19 minute 41-second game to break.

She grabbed the momentum and ran away to take it 6-1.

To the delight of an adoring centre-court crowd Williams raced to a 3-1 lead in the decider. But a resilient Tan broke back and went up 4-3.

As the match clock ticked beyond three hours, inevitably the contest went into a tiebreak and Williams raced into a 4-0 lead.

But Tan simply would not go away, fighting back to lead 5-4 and winning it 10-7 with a rasping forehand.