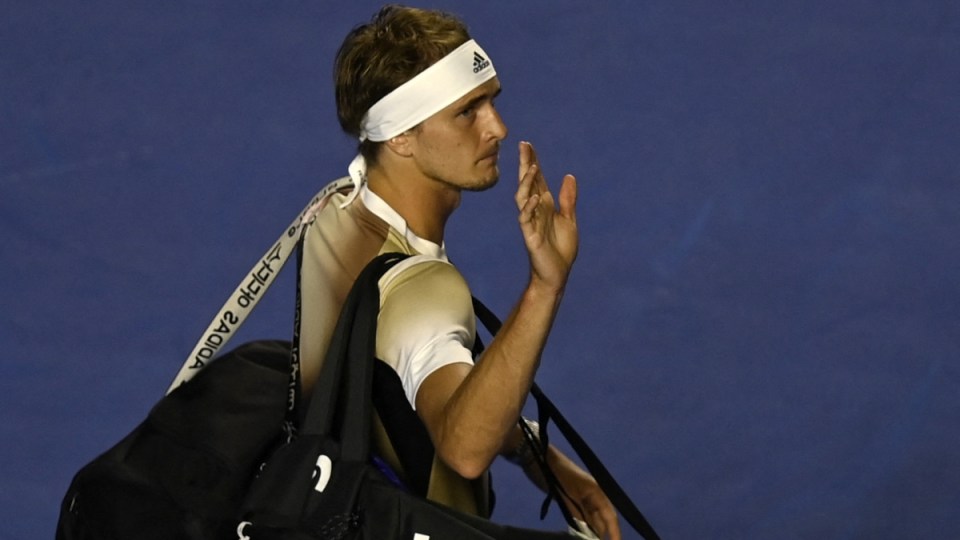 Alexander Zverev has apologised after being kicked out of the Acapulco ATP Tour event. Photo: Getty

World No.3 Alexander Zverev has apologised for his behaviour after being expelled from the ATP 500 tournament in Mexico for repeatedly smashing an umpire’s chair with his racquet.

Zverev, partnering Brazilian Marcelo Melo in doubles on Tuesday night, came perilously close to hitting umpire Alessandro Germani during his tantrum after a 6-2 4-6 10-6 defeat to the British-Finn pair of Lloyd Glasspool and Harri Heliovaara.

After the ATP announced his expulsion in a statement for “unsportsmanlike conduct”, which should also bring hefty sanctions for the German, Zverev said he regretted his behaviour and apologised for the incident.

“It is difficult to put into words how much I regret my behaviour during and after the doubles match yesterday,” Zverev said in a statement.

“I have privately apologised to the chair umpire because my outburst towards him was wrong and unacceptable, and I am only disappointed in myself.

“It just should not have happened and there is no excuse.

“I would also like to apologise to my fans, the tournament, and the sport that I love.”

After shaking hands with his opponents, the 24-year-old Zverev approached the umpire’s chair and hit it repeatedly before heading towards his courtside seat, upset over a line call during the match earlier.

He approached the chair a second time and once again hit it while shouting expletives.

“I am going to take the coming days to reflect, on my actions and how I can ensure that it will not happen again,” Zverev said.

“I am sorry for letting you down.”

The former US Open finalist and singles defending champion in Acapulco had completed a first-round win over American Jenson Brooksby at 4.55am local time on Tuesday, the latest ever finish for a professional tennis match.

Zverev had been scheduled to meet fellow German Peter Gojowczyk, who will now get a walkover to advance to the quarter-finals.

The angry outburst should earn Zverev more sanctions from the men’s governing body.

World No.1 Novak Djokovic said the disqualification of Zverev was correct, but offered some support to his friend.

“I’ve made mistakes in the past where I’ve had tantrums on the court,” Djokovic said at the Dubai Tennis Championships.

“I understand what the player is going through. But, of course, I do not justify his actions.

“I think the disqualification decision was not too harsh. I think it was correct under the circumstances.”

Djokovic was, famously, disqualified from the 2020 US Open after inadvertently hitting a female line judge with a ball hit away after losing a point.

Andy Murray, also in Dubai, was critical of Zverev and described his actions as “dangerous, reckless”.

“I’m certainly not claiming to be an angel. I’m not perfect myself,” the former world No.1 said.

“However, when you’re ripping your tennis racquet right next to the umpire multiple times, yeah, you can’t be doing that.”