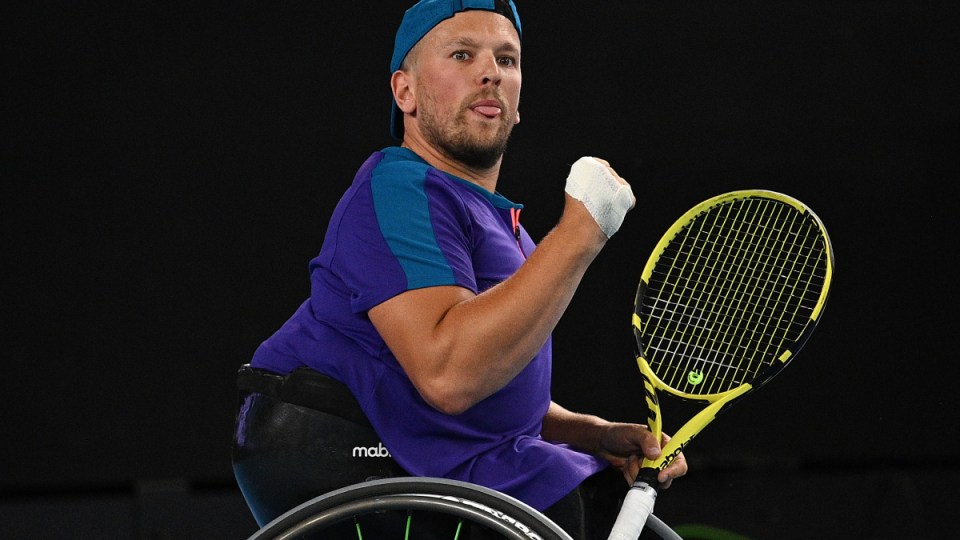 Dylan Alcott will retire from tennis after next year's Australian Open.

Alcott, who won a rare calendar year ‘golden slam’ earlier in the year after taking all four major titles – including the US Open – and Paralympic or Olympic gold, will quit tennis after January’s Australian Open.

“There no way I could finish my career [in New York] a few weeks ago because the US Open was not my home,” an emotional Alcott said announcing his retirement at Melbourne Park on Tuesday

“This is my home and the Australian Open changed my life. I owe it everything.”

The 30-year-old Melburnian said he would save his “big thank-yous” for when he did retire, “which is not today, it is just the announcement. I feel like John Farnham announcing today, one more time”.

“The time has come, I feel redundant, I feel old, washed up. The next generation is here, and it is their turn to dominate and get the recognition they deserve,” he said.

He had already announced that this year’s Tokyo Paralympics would be his last, after he clinched gold in the quad singles final.

Alcott started his Paralympic career as a teenager, winning gold with the men’s basketball at the 2008 Beijing Games, and declared 2021 was his fourth and final.

He finishes with four gold and two silver medals from his tennis and basketball entries.

“I’m not coming back to the Paralympics ever again and I love it so much, it means so much to me,” he told Channel Seven after the medal ceremony in September.

Alcott has been a paraplegic since having surgery to remove a tumour wrapped around his spinal cord during the first few weeks of his life.

He was bullied about his disability as a child and confessed he “hated” himself growing up, but said tennis saved his life.

Since winning his first grand slam title in 2015, Alcott has used his growing public profile to help shift the conversation around people living with disability.

“I’m super proud [of my career] and probably more proud of the work we’ve done off the court, to be honest,” he said.

“Being a good tennis player is probably the 32nd priority in my life, and I mean that.

“[I’ve tried to be] a good advocate for my community to change perceptions for people like me so they can live the lives that they deserve to live and get the opportunities that I’ve had.”

“His influence, infectious personality and positivity has impacted countless people, and across a far wider field than just sport or tennis.”