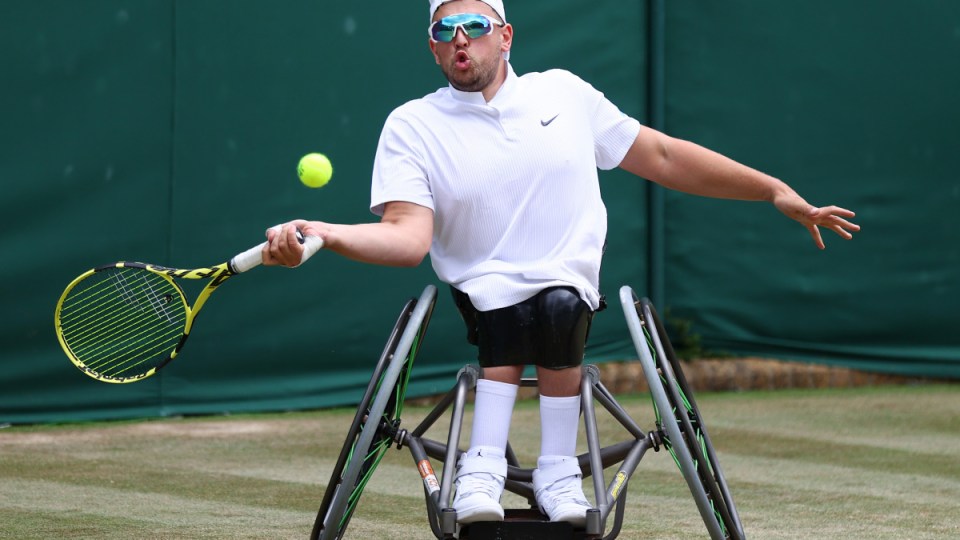 Alcott put on a masterclass to beat US wildcard David Wagner in his semi-final. Photo: Getty

Australian wheelchair tennis phenomenon Dylan Alcott has powered into Wimbledon’s quad singles final, continuing his quest to win a “golden slam” of all four major titles and the Paralympics.

The Melbourne champion, who has already won his home Australian Open and French Open titles, is hot favourite to successfully defend his Wimbledon crown after beating American wildcard David Wagner 6-2 6-2 in the semis on Thursday (British time).

The 13-times singles champion Alcott took just 73 minutes to defeat his 47-year-old US rival –a six-times grand slam winner himself – in an impressive display that featured 11 aces and 43 winners.

But Saturday’s final won’t be easy.

Young Dutch riser Sam Schroder, who beat Alcott in the 2020 US Open final and also at June’s French Riviera Open, defeated Briton Andy Lapthorne 7-5 6-7 (5-7) 6-3 in the other semi.

Yet the irrepressible Aussie character is hoping to get his revenge on the outside courts at Wimbledon, with half-an-eye on the calendar slam.

“I’d have a thousand beers and be the happiest guy in the world if I did the golden slam – so I’m going to try to do it but all I can do is give it my best,” Alcott said.

“Mate, it’d be unbelievable – but it can be a dangerous game when you’re thinking too far ahead, so I try not to. I got burned once before doing that in 2019.

“But my self-worth, my worth to my community and my country is not dependent on me winning the ‘golden slam’. I used to think it was and then I’d fail and think, ‘I’m not worth it’ and ‘I’ve let everyone down’.

“But I can still be an ambassador for my sport if I lose a match and help my community – people with disability around the world.”

Alcott had to spend five days in quarantine after arriving in Britain, and is still unsure of what will happen with his Paralympic bid.

“I haven’t even been thinking about Tokyo, to be honest. I’d love the opportunity to play there as long as we can do it safely. I’ll be there with bells on if it goes ahead,” he said.

“But at the moment I’m in the green – I’m strictly Wimby.”