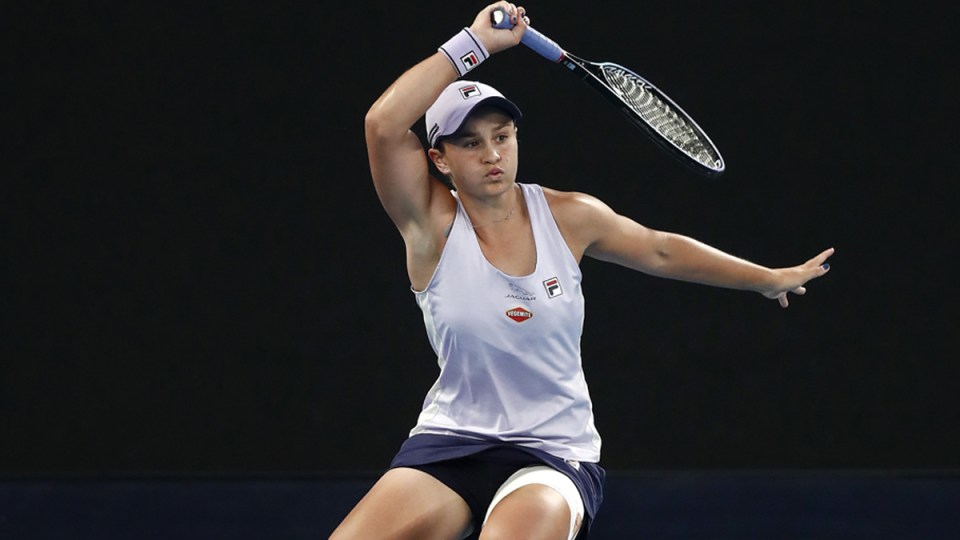 Barty played in Melbourne with a strapped thigh. Photo: Getty

Don’t blame Ash Barty for the fact she remains world No.1 – despite not having won a grand slam title in 20 months, for that is the work of a temporary rankings system introduced in response to the global pandemic.

Yep. Blame COVID. For another thing.

Any grumbling or confusion about why Naomi Osaka, as the only multiple winner of singles majors (four in the past nine decided) is still trailing Barty by a substantial 1351 points on the latest WTA rankings list, can be traced back to mid-2020.

All rankings – which, in practical terms form the basis for tournament entry and seedings – were frozen on March 23, once the sport was shut down internationally, and plans for how the thaw would work were announced before a limited schedule resumed in August.

Change was needed to factor in border restrictions, calendar revisions, the elimination of player commitments for the balance of 2020, and the fact that some players were uncomfortable or unwilling to travel to compete.

In its place came the shorter-term “better of 2019 or 2020” points model, which expires next month.

In summary, if you played the same tournament twice during the 12-month period, you got to count the better result. And if you chose not to play at all, you didn’t lose the points you already had.

Which brings us to Barty, who has now spent 64 weeks at the top of the tree (20 during the deep freeze, 35 in two stints prior to that, 29 and still counting since), despite sitting out the period from August onwards to remain at home in Queensland.

“Given that Ash had won the previous French Open, if she’d played it last year, she would have had to win it to keep the same amount of points,’’ said former Australian Open deputy tournament director and WTA executive Peter Johnston, now running ATP events in St Petersburg and Shenzhen and the postponed Kooyong Classic.

“So whatever you played, you couldn’t do worse on, and by Ash sitting off, she was preserving the points that she’d accumulated to get to No.1. Those points still remain, but they’ll start dropping when Miami starts (on March 23). So you’ll see the effect from there on.

“Once the freeze is off, she’ll have to start playing again, and the pressure of defending on her, and all players, will start to kick in.

One of the hardest things in tennis is the year after you make a lot of points, because defending them is always tough.’’

In that respect, world No.4 Sofia Kenin also has plenty to be thankful for, having admitted she felt the pressure of returning to Melbourne Park this month as the defending champion, then exiting in teary straight sets.

But no rankings damage was done, as she retained her 2000 points from last year, instead of a swap for the first-round loser’s haul: A meagre 10.

The flip side, of course, is that the logjam means others have found it harder to move up.

Take Australian Open finalist Jennifer Brady, who, even had she beaten Osaka to claim her first major, would only have reached No.12, when, in a normal year, single-figures would have been guaranteed.

(One suspects that will not be far off for the much-improved American.)

So how different would the top 10 look had the traditional 52-week system remained? (Acknowledging among other things that, had it not been rightly tweaked to help take into account the unprecedented circumstances, players such as Barty may well have decided to play more – and, quite possibly, might have won.)

Still, just for the sake of the exercise, we asked WTA stats guru Kevin Fischer to crunch the numbers.

Under the 52-week rolling system, it would be:

Barty, who has played just two tournaments since March – winning the Yarra Valley Classic lead-up event and then losing to Karolina Muchova in the Australian Open quarter-finals – would be at No.18.

The 24-year-old has already flagged her intention to play the upcoming Doha/Dubai double, and then potentially set up a 2021 European base, given the travel difficulties and quarantine requirements each time she returns to Australia.

Ahead of Wednesday night’s opening match at the Adelaide International – an event postponed from January to accommodate players already in the country before many depart for a still-uncertain future abroad – Barty was asked about the threat of an advancing Osaka and the many points she has to defend from April onwards.

She insisted it had not crossed her mind.

“For the tournaments or with the rankings, that’s out of my control. As for defending points, I think that’s a very negative way to look at it,” she said.

“Obviously I go back to tournaments knowing that I’ve had successes there. I’ve had good memories. And we go back there and we start from scratch.’’

As the what now and how questions are being grappled with by tennis officials around the world, Johnston believes there is an obvious answer to where the ranking system should head next, for although the pause that morphed into the “best of 2019-20” initiative was necessary, it also brought complications.

“It didn’t really encourage you to play, it was more about protecting you if you didn’t, or couldn’t. But now it will be back to encouraging, which will be really important for the survival of tournaments,’’ Johnston said, using the example of drawcard Nick Kyrgios, who might never be prised from comfortable Canberra if there continued to be no threat to his ranking – and thus entry into tournaments – when he eventually returns.

If borders can not be kept open for all events, Johnston’s suggestion in the interests of fairness is to follow golf’s lead and introduce a temporary rankings component based on the strength of the field.

“I think how it’s been managed has been the way to go. But as the pandemic continues, it’s not like we can push a reset button and we’re all back to normal at the end of 2021. We’ll have to now also look to another couple of options for the next two years.’’

In the meantime, we can keep blaming COVID for any apparent anomalies. In tennis, as everywhere, those Wuhan bats have a lot to answer for.

Ash Barty is still No.1, but here’s why it’s not her fault either way