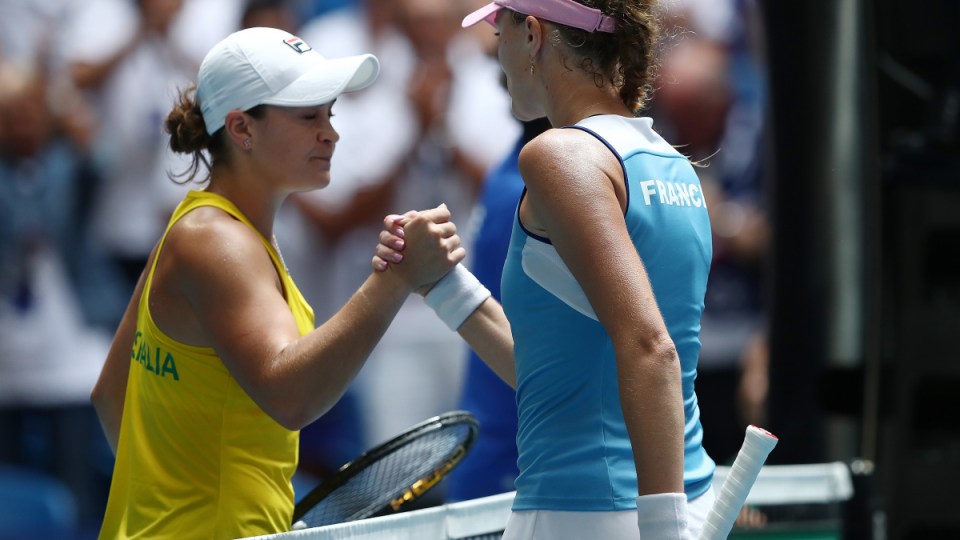 If not this year then when for Australia and the Fed Cup?

Australia’s bid to win the Fed Cup for the first time in 45 years ended in heartbreak on Sunday in Perth, with France prevailing in the doubles decider to claim a 3-2 victory.

And, in the end, it was World No.1 Ashleigh Barty who faltered, losing in an upset in the singles and then partnering with Samantha Stosur for a loss in the doubles

French duo Caroline Garcia and Kristina Mladenovic were too good for Barty and Stosur, cruising to a 6-4 6-3 win to secure the nation’s third Fed Cup crown and first since 2003.

Mladenovic had stunned Barty 2-6 6-4 7-6 (7-1) in an epic two-and-a-half hour singles battle in the afternoon at RAC Arena to put France ahead in the best-of-five rubbers final.

Barty tallied 47 unforced errors for the match but was adamant she hadn’t tightened up under the pressure of leading Australia’s bid to end a 45-year Fed Cup title drought.

“I came back from a break down twice in the third set and Kiki just played a more aggressive tiebreak.

“From my point of view, I fought as hard as I could.

French No.1 Mladenovic’s phenomenal weekend, which also included a straight-sets drubbing of Ajla Tomljanovic, proved to be the difference between the two nations.

Having combined to win the French Open doubles crown in 2016, Mladenovic and Garcia were clinical in the deciding rubber.

Australia managed to save two championship points but it was only a matter of time before Mladenovic fittingly served out the match.

It was sweet redemption for Mladenovic and Garcia, who lost the deciding doubles rubber to the Czech Republic in the 2016 Fed Cup final.

“It’s lots of emotion to share this with Caro after three years ago we failed on the last step of the tie,” Mladenovic said.

Today we just wanted to take this little revenge for ourselves and it’s just not describable how we feel right now.”

Tomljanovic earlier overcame her nightmare debut to defeat Pauline Parmentier 6-4 7-5 in the reverse singles and send the final to a doubles decider.

Tomljanovic was overcome by nerves while representing Australia for the first time on Saturday, losing 6-1 6-1 to a rampant Mladenovic.

But there were no signs of anxiety in a vastly-improved performance on Sunday.

France opted to bring in world No.122 Parmentier as a substitute for Garcia, who Barty thrashed 6-0 6-0 in Saturday’s singles rubber.

Barty had gone into Sunday’s reverse singles clash with Mladenovic as the hot favourite after her annihilation of Garcia the previous day.

But world No.40 Mladenovic again proved too good, storming back from being a set down to consolidate her defeat of Barty on clay in Rome six months ago.

In a match full of momentum swings, Barty rode a wave of support from the near-capacity crowd to go up 6-5 in the third set.

But the equally determined Mladenovic served to love and didn’t blink during a ruthless tiebreaker.