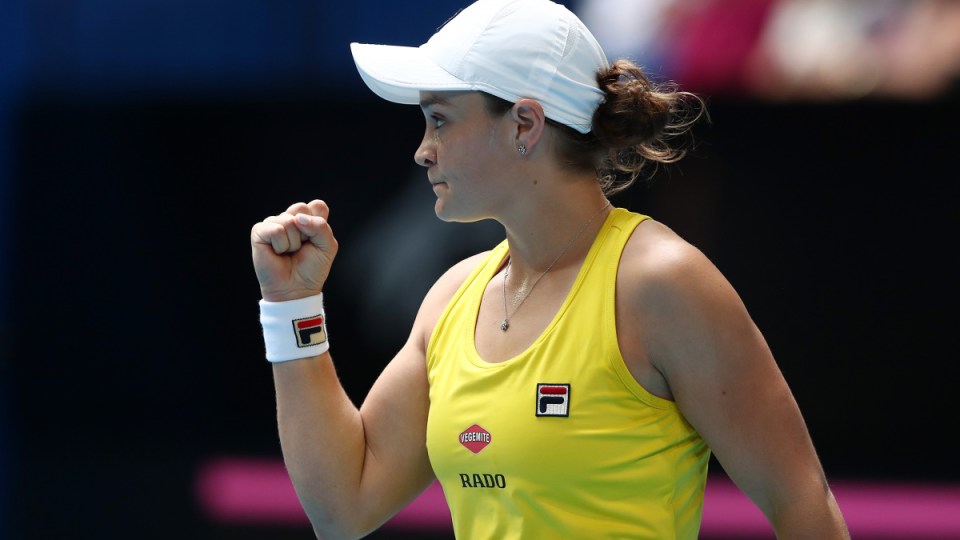 World No.1 Ashleigh Barty has obliterated Caroline Garcia 6-0 6-0 to even the ledger between Australia and France in the Fed Cup final in Perth.

Barty’s clinical victory in just 56 minutes made it 1-1 in the best-of-five format, ahead of Sunday’s reverse singles and potentially a doubles decider at RAC Arena.

A shattered Tomljanovic admits the nerves of debuting in a Fed Cup final proved too much after being taught a lesson by French opponent Kristina Mladenovic.

Tomljanovic had no answers for a red-hot Mladenovic during her drubbing.

The Australian battled with her serve and managed just two winners for the match, as world No.40 Mladenovic guided France to a 1-0 lead in the best-of-five final.

Having become eligible to represent Australia just weeks earlier, Croatia-born Tomljanovic was picked ahead of Samantha Stosur – Australia’s most-successful Fed Cup player – to back up world No.1 Ashleigh Barty in the singles.

But the world No.51’s nerves were obvious throughout, despite having a near-capacity RAC Arena crowd rallying behind her.

“It’s not something you can really explain,” Tomljanovic said.

“That’s just my personality. I want it even more when it’s for others and for my teammates and my country.”

Both teams have the option of changing their nominated players for Sunday’s reverse singles, with Tomljanovic scheduled to play Caroline Garcia.

It remains to be seen whether team captain Alicia Molik will opt to substitute with the more-experienced Stosur.

“If I’m in a position (to play), I definitely feel like I can,” Tomljanovic said when asked whether she felt she could bounce back on Sunday.

“It’s tennis. Anything can happen.

“I definitely think I will kind of know what to expect more from how I’m feeling.”

‘I am not afraid’: The modern unknown soldier risks it all in Ukraine
Energy market reform will be a big boost for emissions reductions: Chris Bowen
Greens sign up for Labor’s looming jobs-and-skills summit as Liberals stick with boycott
Joe Biden’s $430b green victory for the environment
China cementing its Thailand ties with joint military exercises
NRL: Titans frantic to end 10-game losing streak as Manly showdown looms
Fed Cup: Veteran Stosur makes way in singles for a rising star
Today's Stories