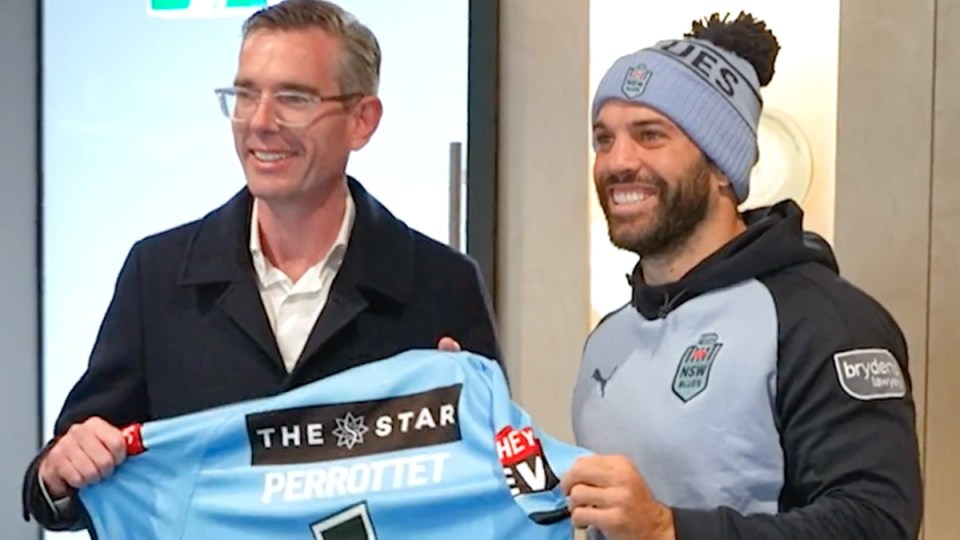 Dominic Perrottet was presented with his own Blues jumper at a training camp last week.

NSW Premier Dominic Perrottet has poked fun at his predecessor, Gladys Berejiklian, as he gears up for Wednesday night’s State of Origin opener.

Mr Perrottet posted a picture of himself decked out in NSW gear to social media on Wednesday afternoon.

“Getting ready for Game 1. Go the NSW Blues,” he wrote.

It was a cheeky reference to a similar snap posted by Ms Berejiklian, ahead of the 2021 series, when she was still premier. She was widely lampooned a year ago for the photo, which showed her from the back, dressed in a patriotic Blues scarf and beanie, holding a soft drink and apparently staring at a wall.

It sparked a flurry of lookalikes, as social media users poked fun at the then-premier.

Mr Perrottet – a known fan of the NRL’s Wests Tigers – got a much better reception. Although one wag was quick to repost his picture with a blank background for anyone keen to continue the theme.

The Premier’s cheeky snap was just the first round ahead of Wednesday night’s State of Origin opener.

He has also agreed to turn light Sydney Harbour Bridge up in maroon, if Queensland is victorious at the end of the series, in a wager with Queensland Premier Annastacia Palaszczuk.

She has agreed to turn Brisbane’s Story Bridge blue if NSW is the eventual winner.

“Origin is more than a game, for 42 years it’s been mate against mate and state against state,” Ms Palaszczuk said on Wednesday.

Despite taking the wager, Mr Perrottet alleges it’s an unfair bet because the stakes are unequal.

“So their bridge is apparently called the Story Bridge,” he said.

“I hadn’t heard of it. I had to Google it to make sure it was in Queensland.

He also cast doubt on the northern state keeping its side of the bargain, saying he was still waiting on $30 million owed from Queenslanders who spent time in NSW hotel quarantine.

“So we’ll resend that bill once we win tonight,” he said.