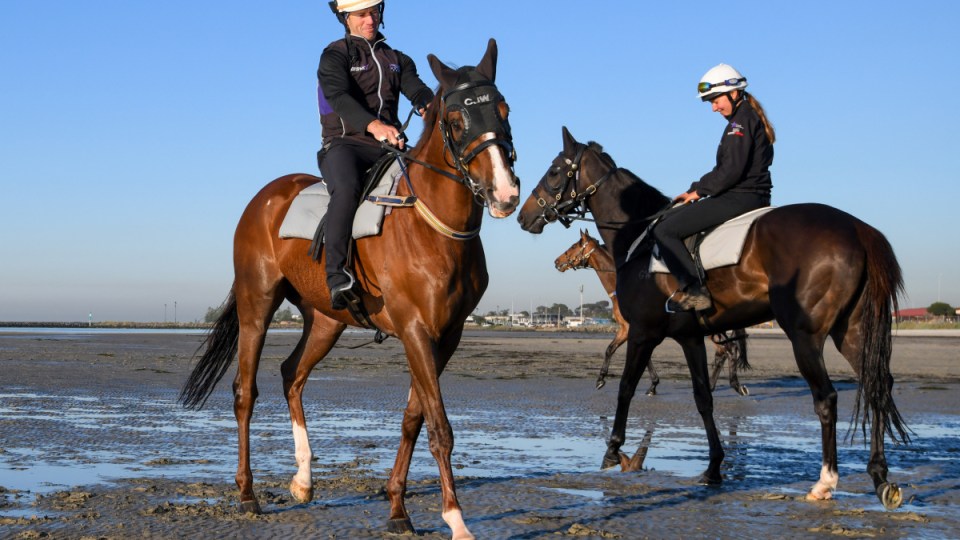 Kings Will Dream (L) at a recovery session at Altona Beach in Melbourne on Wednesday. Photo: AAP

Saturday’s Cox Plate will offer up a dramatic comeback, with Kings Will Dream returning to racing 12 months after fracturing his pelvis in the same race last year.

During a fortnight of severe introspection and external pressure for the racing industry after 7.30‘s revelation of the mass slaughter of retired racehorses, this sprinter’s story is sure to inspire equal parts outrage and excitement among critics and fans respectively.

Around 12 months ago, Kings Will Dream was lining up alongside Winx in the 2018 Cox Plate – a member of the seven-strong cast expected to support the great mare as she raced to a fourth Cox Plate in a row.

Speaking with Helen Thomas and Max Presnell on ABC Radio’s Hoof on the Till podcast, managing owner Brae Sokolski said there was no expectation on Kings Will Dream in that race.

“The horse came into the race in fabulous form,” Sokolski said.

“He obviously came into the race, not with any expectations of winning because the champion mare [Winx] was obviously there.

“We were just hopeful we would get in the frame for that famous photo when she won her fourth Cox Plate.”

Unfortunately, it did not take long to realise something was wrong as Kings Will Dream missed the start by six lengths, before picking up stride well off the rest of the field.

“As soon as the barriers opened, you could just see the horse sort of stumbling out of the gates and struggling to tack onto the field,” Sokolski said.

“At that stage, we know that something was dramatically wrong.”

From ‘elation’  to ‘abject devastation’

Kings Will Dream did make it to the back of the field, but Irish jockey John Allen pulled him up with 1600 to go after detecting his galloping action “just felt wrong”. It was an astute judgement.

As Winx stormed towards victory, the Moonee Valley crowd rising as one to pay homage to the undisputed queen of the track, Kings Will Dream remained stricken on the back straight.

As Chris Waller and his team enjoyed the greatest day of their careers, the connections of Kings Will Dream had their worst as they waited in vain for their horse to return to the stalls.

“He had fractured his pelvis at some stage – we can only assume on jumping away – but that was only the start of his travails,” Sokolski said.

“The fracture of the bone had actually pierced the blood vessel and he was losing blood at a dramatic rate so he had to be rushed to the Ballarat veterinary clinic and they basically fought for 72 hours to save his life and stem the bleeding.

“We’d gone from the elation of having a runner in that race to the abject devastation of feeling like we we’re going to lose the horse.”

With Kings Will Dream’s life hanging in the balance, Sokolski was willing to do anything to save his life.

“We just wanted the horse to be happy, healthy and be in a paddock so we could all go and visit him – and that was, really, the optimistic angle at that stage,” Sokolski said.

However, there was precedent for Kings Will Dream to enjoy a successful recovery and even return to racing, no matter how unlikely it appeared at the time.

Media Puzzle, trained by Dermot Weld, broke his pelvis in 2000 and spent four-and-a-half months in his box recuperating.

Under the care of the legendary Irish trainer – and vet – Weld, Media Puzzle returned to the track and became the second Irish horse to win the Melbourne Cup in 2002.

Kings Will Dream began his lengthy and painstaking recuperation.

“He was stall-tied for three months,” Sokolski explained.

“He basically had a rope either side, a very tight rope because we couldn’t afford for him to lie down, it was too much risk for him to refracture that pelvis.

“For an animal that’s naturally a herd animal, you can imagine how difficult that would be psychologically – and he just handled it with absolute aplomb and was always bright and happy.”

It was 43 weeks later that Kings Will Dream was fit to return to the track. Now, stabled with Chris Waller in Sydney, he ran in a barrier trial at Rosehill and came seventh of nine.

Just under three weeks later, he had his first official race since the Cox Plate, coming fifth in the Winx Stakes at Randwick.

An eighth at Flemington followed and he was then entered in the Turnbull Stakes, one of the early key races in the spring carnival.

There were no problems on this big day, as Kings Will Dream ran smoothly before pushing his way out at the 400m mark and getting to the front 150m from the finish.

Ridden by Jye McNeil, he held off Finche and Hartnell to win his first race in 559 days to cap a remarkable comeback, with the possibility of more rewards to come on Saturday.

“It was just unfathomable that the horse would not just come back but come back and race at the elite level and then win his first group one,” Sokolski said.

‘One of the great resurrection stories of Australian turf’

On Saturday, Kings Will Dream has the opportunity to go full circle and win the Cox Plate, the race that 12 months before nearly killed him.

Yet remarkably, Sokolski has another two horses in possible contention, Very Elegant, a horse that has “definitely got the ability to win a Cox Plate, there’s no doubt about that”, and first emergency Humidor, who has a redemption story of his own.

Humidor, who came so close to ending Winx’s fairy tale at the 2017 Cox Plate, is first emergency for this year’s race, having already recorded a second and third in consecutive years behind the great mare.

However, while still reeling with the news that Kings Will Dream was fighting for his life, Sokolski received the call that his seven-year-old champion horse was also not at full fitness.

“Coming out of the Cox Plate on the Monday morning [last year] – whilst Kings Will Dream was still effectively in intensive care – I got a call from the stable telling me that Humidor hadn’t pulled up well … and may never race again.

“That was only 48 hours afterwards, so I wasn’t feeling at my best on the Monday and … I was resigned to him never racing again.”

However, race again Humidor did, coming in fifth at this year’s Caulfield Stakes, just two lengths back from the winner. And should he make the start line at Mooney Valley, he could add another layer to an already-incredible story.

“People love those narratives,” Sokolski said. “Whether it’s an equine athlete or a human athlete.

“We were just happy for the horse to survive.”