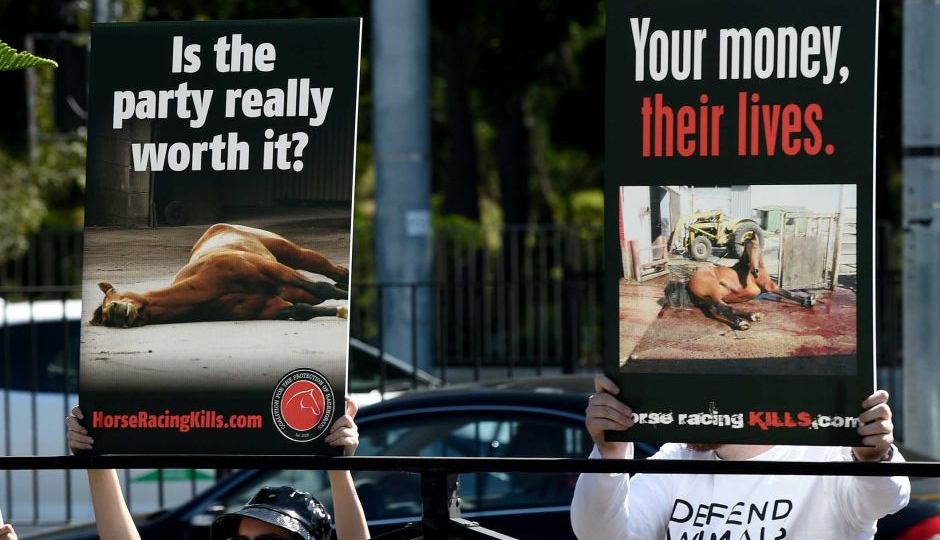 Protesters hold up signs outside Royal Randwick ahead of The Everest. Photo: AAP Photo: AAP

Champion racehorse trainer Chris Waller says vision of ex-racehorses being slaughtered in a Queensland abattoir was so sickening he couldn’t watch.

The vision was part of an expose by ABC TV’s 7.30 program, which also revealed thousands of former racehorses were being destroyed annually.

The slaughter of racehorses is not illegal in Australia but it is against Racing NSW policy and rules, which state that all retired racehorses should be rehomed.

The program used monitoring by the Coalition for the Protection of Racehorses and recordings from undercover investigators at a number of locations, including the Meramist abattoir at Caboolture in Queensland.

The vision obtained by the ABC showed abattoir workers tormenting animals before they were killed.

Covert cameras recorded horses being beaten and abused, bolted in the brain repeatedly and ineffectively killed.

Waller said he was deeply affected by the program.

“I was shocked. A lot of that vision I couldn’t watch myself. It was sickening,” Waller told ABC.

“To think that there were a few horses that were racehorses was bad enough, but for any horse for that to happen to them, let alone an animal, it just blew me away, as it has with my fellow colleagues, and trainers and lovers of animals.”

Waller is one of Australia’s highest profile racehorse trainers, most famous for guiding Winx to a record four Cox Plate victories and 33 consecutive race wins.

Waller has his headquarters at Rosehill in Sydney, but he also has bases at Warwick Farm, and also at Flemington in Melbourne and on the Gold Coast.

“I’m proud to say that we find homes for all of our horses, or find what we think are suitable placements.

“There was a horse brought up in that story [on 7.30] that had been from my stable, but it was two years afterwards.

“It had raced in another trainer’s care for two years, and I understand that he found it a suitable home, but it found its place at an abattoir, which I’m shocked about — and I’m not going to hide it, because it needs to be dealt with.”

Waller said authorities in NSW had taken steps to ensure more transparency over where horses were taken.

“It’s really stepped up in the last few years, where we must document, document at length where a horse is going to when it leaves out stable — whether it be sold or whether it be retired,” he said.

“So once that horse leaves our stable, we must have a paper trail to show where it goes.

“It seems to be there could be a breakdown [in the system] when those horses leave the racing industry and enter other parts of Australia, where we’re losing sight of what’s happened to them.

“We need to step up procedures. The industry has to be responsible.

“It needs to be backed by federal and state governments to make sure that these people are brought to trial, and… that the fines and the [jail] terms are fit for sentence.”

Protesters make a statement in Sydney and Melbourne

Dozens were protesting outside Royal Randwick, the venue for the world’s richest turf race, The Everest — with many saying they were motivated to come out following the ABC investigation.

Protesters were chanting “horse racing kills” at racegoers as they made their way into the venue.

The Coalition for the Protection of Racehorses campaign director, Elio Celotto, was leading the protests, and he said the 7.30 investigation had galvanised supporters.

“Now the tide is well and truly turning and people are opposing the racing industry for the inherent cruelty that they are allowed to perpetuate,” he said.

“In all honesty I don’t think the racing industry has the will to really reform itself.

“I think it will be when they’re on their knees, when they realise that they’ve lost public support, that they’ll probably do something, but we hope that significant change will start to take place and we’ll certainly be there making sure that change does take place.”