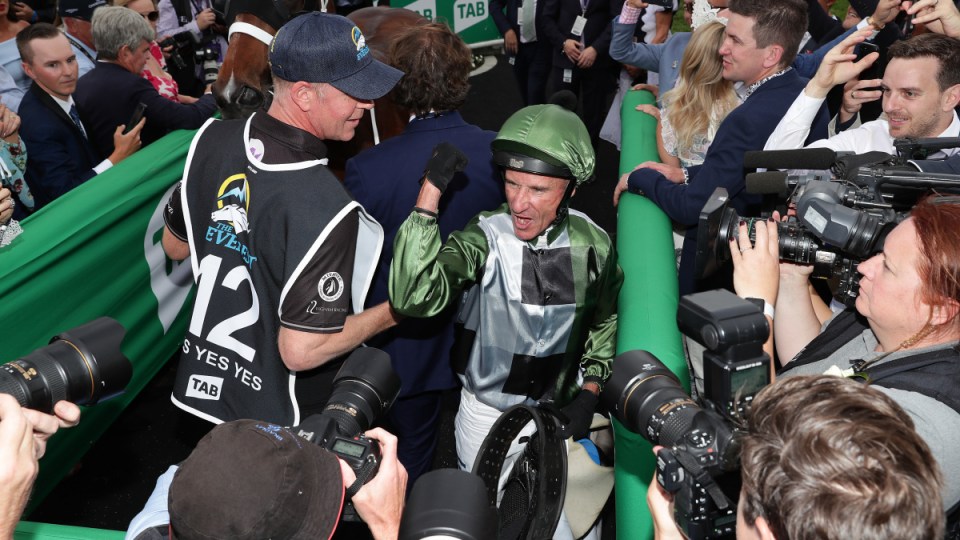 Glen Boss is all smiles after his win in The Everest on Yes Yes Yes. Photo: Getty

In a week where the ugly side of horse racing has been highlighted, the on track action has offered some respite for racing fans, with a Japanese horse winning the Caulfield Cup and legendary trainer Chris Waller taking out The Everest sprint at Randwick

Mer De Glace won the Caulfield Cup, ridden by Damien Lane, who said after the win that he had pressed the connections to bring the horse to Melbourne given it’s relatively low weight penalty.

“I sort of planted the seed after the second time I won on him and connections were really happy to come,” Lane told Channel Seven after crossing the line.

In Sydney, three-year-old Yes Yes Yes won The Everest $6 million sprint race, with trainer Chris Waller surrendering to emotion as he recalled how Winx, his other great sprinter, helped pave the way for more success.

Waller said there had been so much at stake in putting the colt up for the big money race, where he won ahead of favourite Santa Ana Lane, initially caught at the back of the field.

“Especially when there is so much at risk, we basically you have to go to the owners … and say ‘This horse, I think can win an The Everest’, you can’t go in to run second or third,” Waller told Channel Seven.

“Then you have to go to the slot holders and say ‘We think this is the horse you should choose’.

Waller said Winx had taken him on a wild ride and to have another winner was overwhelming.

To tell you the truth, amazing feeling, but where we have been with Winx puts it all, like where she took us has probably set us up for days like this so cope so much better.

“Yeah, I took it all in our stride all week. While I’m getting emotional is the ride she took us on.”

Jockey Glen Boss said it was a surreal race.

“When I went out three wide, when I asked him, his turn of speed was of Group is it quality only,” Boss said. “Jeez he sprinted quickly.

“The build-up, and you finally get here and stand on the blocks for 100m and you have to get gold, I tell you what, that’s an unbelievable experience.”

Earlier, Waller had said he was deeply affected by the ABC program on the slaughtering of retired racehorses.

“I was shocked. A lot of that vision I couldn’t watch myself. It was sickening,” Waller told ABC.

“To think that there were a few horses that were racehorses was bad enough, but for any horse for that to happen to them, let alone an animal, it just blew me away, as it has with my fellow colleagues, and trainers and lovers of animals.”

Waller is one of Australia’s highest profile racehorse trainers, most famous for guiding Winx to a record four Cox Plate victories and 33 consecutive race wins.

Waller has his headquarters at Rosehill in Sydney, but he also has bases at Warwick Farm, and also at Flemington in Melbourne and on the Gold Coast.

“I’m proud to say that we find homes for all of our horses, or find what we think are suitable placements.

“There was a horse brought up in that story [on 7.30] that had been from my stable, but it was two years afterwards.

“It had raced in another trainer’s care for two years, and I understand that he found it a suitable home, but it found its place at an abattoir, which I’m shocked about — and I’m not going to hide it, because it needs to be dealt with.”