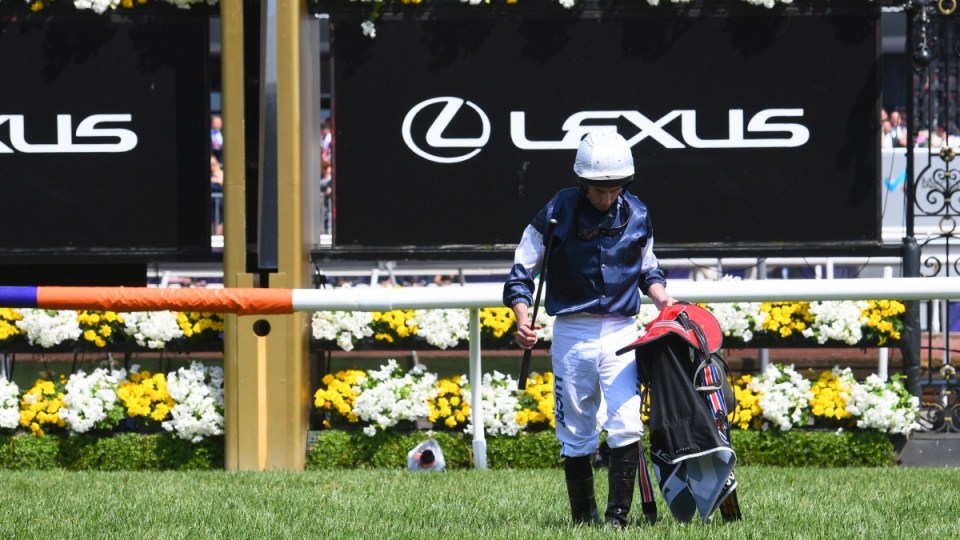 Jockey Ryan Moore walks back to the mounting yard after The Cliffsofmoher broke down in the Melbourne Cup at Flemington. Photo: Getty

There was a strong feeling of déjà vu after the 158th running of the Melbourne Cup on Tuesday, as another horse died on Australian racing’s biggest day and yet another foreign raider claimed the big prize.

Irish horse The Cliffsofmoher was euthanised on the Flemington track following the main event, won by Cross Counter, and although racing demands that the show goes on – in this case, another three races – it meant that a day that started with gloomy skies and a downpouring of rain ended in tragic fashion.

One of the fancied chances in the Cup, The Cliffsofmoher pulled up early in the race with a shoulder injury that would prove fatal, with vets on the scene coming to the conclusion that the five-year-old horse could not be saved.

Racing Victoria quickly released a statement that extended sympathies to those connected with the horse and added: “This was an unfortunate incident that happens infrequently, with Victoria having one of the best safety records in world racing.”

Racing Victoria's Executive General Manager – Integrity Services, Jamie Stier, has issued the following statement regarding The Cliffsofmoher after the running of the Melbourne Cup at Flemington today. https://t.co/zSfQLfGwZ7

That might be true but the facts of the matter are this: Six horses have died from Melbourne Cup Day incidents in as many years.

Popular horse Red Cadeaux was euthanised a fortnight after a fall on Cup Day in 2015, while Regal Monarch did not survive a fall last year.

It is a terrible look for horse racing, particularly given the high percentage of the community that takes a passing interest in the pursuit for one day, that being Melbourne Cup Day, each year.

“The Cliffsofmoher becomes the 6th horse to die as a result of the #melbournecup since 2013. Highlights the very real risks to horses from racing,” a message on the RSPCA’s Twitter account read.

The build-up to the Cup was marred by drama as a deluge of rain saw big changes in track conditions, betting odds and race times.

More than 50mm fell at Flemington in a five-hour period and a thick fog developed, with jockey Damien Oliver admitting after the day’s first race that “I was in front and I couldn’t see”.

Concerns for the meeting eased as the rain did, though, and in typical Melbourne fashion, the sun even poked its head out as four-time Grammy Award winner Sam Smith performed a popular two-song set before the Cup started.

Magic Circle, whose owner Dr Marwan Koukash promised to accept the Melbourne Cup trophy in a g-string if successful, edged out Yucatan for pre-Cup favouritism at one point but it was only fleeting, with the tables turned by the time they jumped.

And it was one of just three Australian-bred and Australian-trained horses in the race, Runaway, that made the early running in the Cup, leading as they went past the winning post for the first time.

Runaway, ridden by veteran jockey Stephen Baster, was still in front as they turned for home down the famously long Flemington straight.

But it did not last as Finche and Marmelo worked into the race, before A Prince Of Arran loomed up and looked ominous in front of the 83,471-strong crowd.

A Prince Of Arran won the last spot in the 24-horse field by winning at Flemington on Saturday and two huge wins in four days seemed likely until Cross Counter, with Kerrin McEvoy on board, got in the clear.

Marmelo continued to impress up the inside of the track but Cross Counter, who was second last at one point, surged to a famous victory down the outside, giving Godolphin its first Melbourne Cup victory after 20 years of trying.

And while the prize money had been boosted to $7.3 million in 2018 – of which $4 million goes to the winner – chances are that the prize money will not make a dent, given the ruler’s estimated wealth of $25 billion.

But this was the claiming of a long-time goal and the man himself was ‘over the moon’ with the result, according to trainer Charlie Appleby, while jockey McEvoy, who has now won the Cup three times, was elated.

Marmelo and A Prince Of Arran rounded out the places, completing another international trifecta, an unsurprising feature of Melbourne Cup day in the current climate.

Trainer Mick Kent summed up the mood in the racing fraternity when he told the ABC last week that it was unlikely an Australian-bred horse would ever win the Melbourne Cup again.

“We’ve all given up, I think … it’s Australia’s race, it was synonymous with the little battler who could have a chance with a lightweight handicap and get in that race and win it,” he said.

So as another mega-rich owner celebrates a Cup success, many racing fans are asking themselves the question.

3. A Prince Of Arran

*The Cliffsofmoher did not finish