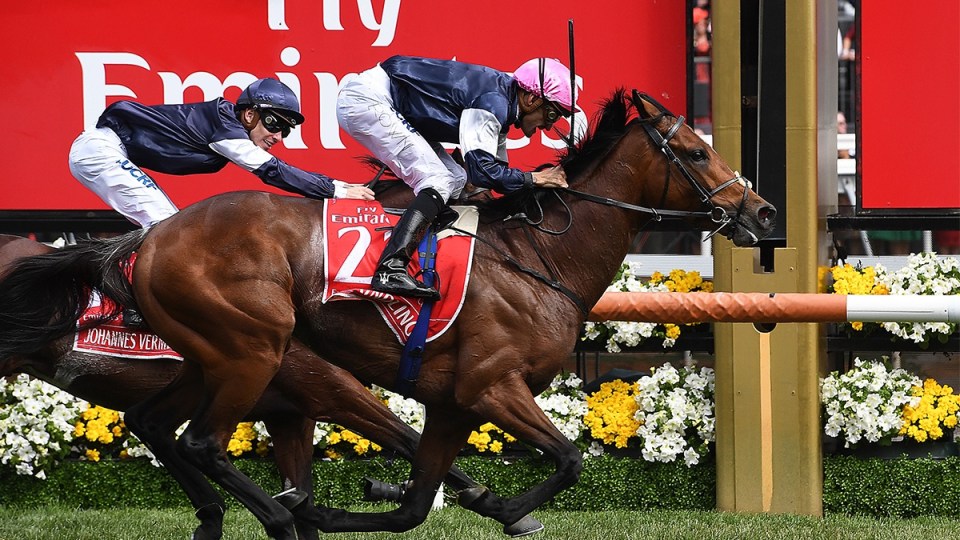 Rekindling claimed the 2017 Melbourne Cup in a nailbiter on Tuesday. Photo: AAP

Rekindling edged Johannes Vermeer in a thrilling conclusion to the 2017 Melbourne Cup, highlighted by a 1-2-3 finish from European raiders.

The locals struggled at Flemington, with Rekindling winning the $6.2 million race after storming down the outside and eventually seeing off the challenge of a determined Johannes Vermeer.

Max Dynamite, which paid $5.20 for the place, finished smartly down the inside to round out the top three, while Big Duke ran a valiant fourth.

“I can’t believe it, honestly,” winning jockey Corey Brown told the Seven Network. “I chased the ride about six weeks ago – obviously with the light weight I thought I’d be a big chance of getting on him.

“It’s so special. I’ve got my family down here with me … I’m just lost for words.”

Brown won the Melbourne Cup onboard Shocking in 2009 and said that he “always thought” he was going to outlast Johannes Vermeer in the race’s thrilling conclusion.

“I can’t quite believe it,” he told the Seven Network. “I’m just so delighted for all the lads at home and the lads here [who work with the horse] – they have done an unbelievable job.

“He had a light weight … the run went so well for him. I am over the moon.”

O’Brien’s father, legendary trainer Aidan, prepares Johannes Vermeer, but the victorious O’Brien said there was no bad feelings between the pair.

“I rang him. He is delighted. Unbelievable,” he added.

The victory was a sixth for owner Lloyd Williams, who also won the Cup last year on Almandin.

Williams said to win another Cup was “absolutely a dream”, adding he was “terribly excited” with the result.

A ninth-placed finish was disappointing for Marmelo, who was equal favourite before the race, with Almandin, last year’s winner, who came 12th on this occasion.

Cismontane made the early running and led the field past the judge for the first time, closely followed by Gallante and Caulfield Cup winner Boom Time.

Marmelo was up with the leaders, too, and worked his way into the race before leading as they turned for home.

But the 3200m distance proved too much for Marmelo and many of the early pacesetters, with Johannes Vermeer looming as the likely winner with 400m to go.

Rekindling had other ideas, though, slowly gaining in speed before engaging in a one-two battle with the leader.

And Brown was good enough to pilot his horse to victory in a finish that had a big crowd at Flemington roaring.