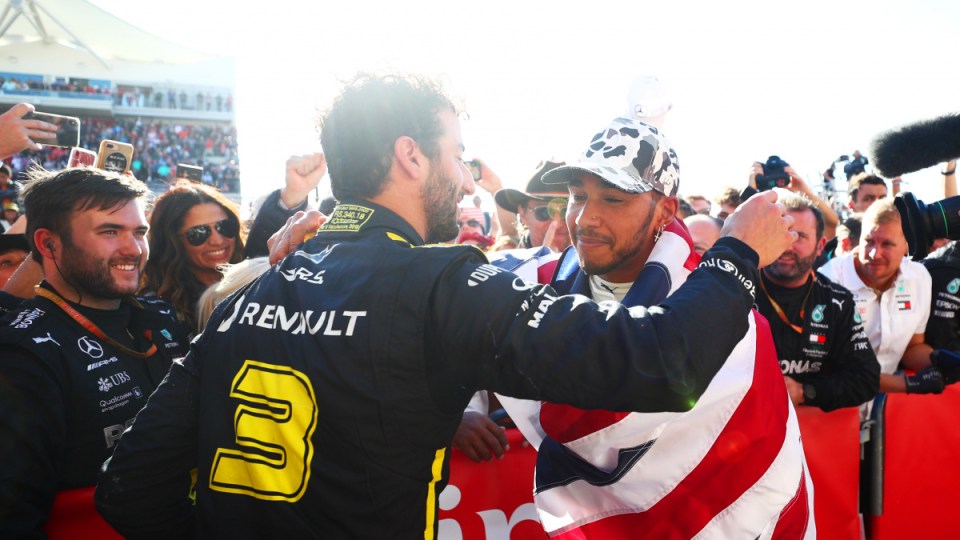 Lewis Hamilton may have claimed the Formula One World championship at the USA Grand Prix, but Australia’s Daniel Ricciardo believes his Renault team has ticked off another goal on the way to challenging for podiums.

Ricciardo, who started ninth and finished sixth, said the Austin race was one of his best of the year.

“We’ve had a lot of fun races this year and this one is certainly up there,” he said in a team statement.

“The one-stop was the plan and it looked like others on the two-stop would get close at the end, which made things a bit nervy.

“We reached our target of beating both McLarens, so that’s really pleasing. It was a strong race and we showed good pace.

“I enjoyed the battle with Lando [Norris] as I passed him and he passed me back a couple of times at the start and then put some pressure on towards the end. We held on for sixth, so it’s solid points for the team with Nico in the top ten as well.”

Ricciardo was one of the first to congratulate Hamilton in the post-race parc ferme, albeit after American film star Matthew McConaughey.

“We have to first acknowledge it was once again a great race in our pack with very open and exciting strategic options for all,” he said.

“Daniel made an excellent start and was one of the few drivers who managed to make a one-stop strategy work.”

Hamilton has claimed his sixth Formula 1 world championship title by finishing second behind Mercedes teammate Valtteri Bottas, after nursing his tyres on a one-stop strategy.

He was overtaken late on by Bottas, who was on fresher tyres and had to win to have any chance of extending the title race to Brazil in a fortnight’s time.

It is Hamilton’s third title in a row and makes him the second most successful F1 driver of all time, one behind seven-time champion Michael Schumacher and one clear of Juan Manuel Fangio.