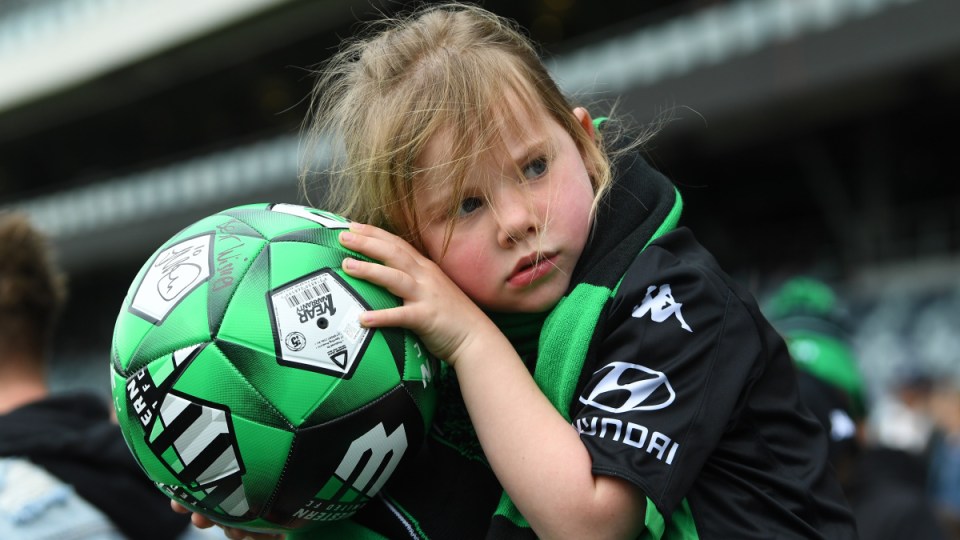 The new face of football: A young Western United fan during the A-League friendly match between Western United and the Western Sydney Wanderers. Photo: AAP

The battle for eyeballs in Australia’s summer sporting marketplace is a crowded and fiercely combative one and, after much soul searching, football’s A-League is trying anew to get to the top of the pile.

Set to kick off this week, Australia’s revamped domestic football league enters a battle for attention against cricket, basketball, tennis and the increasingly covered AFL and NRL off-seasons.

Following long negotiations, the 2019-20 season will mark the first in which control of professional leagues – the A-League, W-League and Y-League – will transition from Football Federation Australia to a group representing Australia’s professional clubs – the Australian Professional Football Clubs Association.

The battle for eyeballs in Australia’s summer sporting marketplace is a crowded and fiercely combative one and after much soul searching, football’s A-League is trying anew to get to the top of the pile.

Set to kick off this week, Australia’s revamped domestic football league enters a battle for attention against cricket, basketball and tennis, as well as AFL and NRL off-seasons that are attracting an increasing level of coverage.

Following long negotiations, the 2019/20 season will mark the first in which control of professional leagues – the A-League, W-League and Y-League – will transition from Football Federation Australia to a group representing Australia’s professional clubs – the Australian Professional Football Clubs Association.

Taking cues from the English Premier League, the new club-run structure is just one facet of the largest shake-up of Australia’s top flight since its birth in 2005.

Initially taking a low-key approach to marketing the league in a hope of finding clear air following the AFL and NRL seasons, news broke last Friday that Australian football had found a new home on free-to-air television, with the A-League, W-League, Socceroos and Matildas games being broadcast on the ABC for the next two seasons.

The league then flexed its marketing muscles with a slick, comic book-inspired marketing campaign.

“We wanted to do something very different,” league chief Greg O’Rourke told The New Daily.

“We were listening to fan feedback that, in the past, the marketing campaign has fallen a bit flat and that it just looked like a bunch of players saying, ‘Look at us, we’re footballers, we’re back, you should love us’.

“Some of our research in the past has been that people don’t know where to find the Socceroos, or the Matildas, or the A-League, or the W-League.

There will also be a new look on the field, chief among them the entrance of expansion side Western United to the competition.

One of the last major decisions the FFA made regarding the A-League, west Melbourne-based United is one of two sides selected to join the competition last January – south-west Sydney’s Macarthur FC is to play out of Campbelltown Stadium from the 2020-21 season.

Securing a licence largely on the back of its promise to build an A-League-first, privately funded, team-owned boutique stadium at Tarneit; United will play home games in Geelong and Ballarat during the facility’s construction – promising it will move into its new home in time for its third season.

Melbourne and Sydney are the historical hotbeds of Australian football; the addition of a new franchise in both cities has the potential to provide much-needed depth to the competition.

Since reaching an average of 13,041 fans in 2013-14, A-League attendances have fallen in every subsequent season, sitting just 10,671 in 2018-19. Television ratings have followed a similar trajectory.

Australian football’s core fan base has faded away, while the casual fan base’s interest shifted to competitors such as the NBL and Big Bash.

“We need to make the product better and we need to attract people,” O’Rourke said.

We’ve got quite a few new coaches that have different playstyles and that, in and of itself, is going to change the dynamic.

“Most, if not all, of the clubs we’ve spoken to have said they’re going to be much more attacking … and much more aggressive in trying to score goals.

“There’s also going to be incentives announced to encourage clubs to play with more under-23s, to ensure that we can unearth some new talent. People are looking for local, home-grown heroes; the next Daniel Arzani coming through the system.

“We’ve spoken to all the clubs to see what they’re going to do on match day to attract families and keep families interested with the whole event and precinct experience.

“We’ve also spent a bit of time talking to stadium police and security … The five clubs sat down with police [in Sydney and Melbourne] about how to better work together so our fans can get a better experience; so that they don’t feel the events are over-policed.”

A-League: How the national competition plans to kick on to new heights