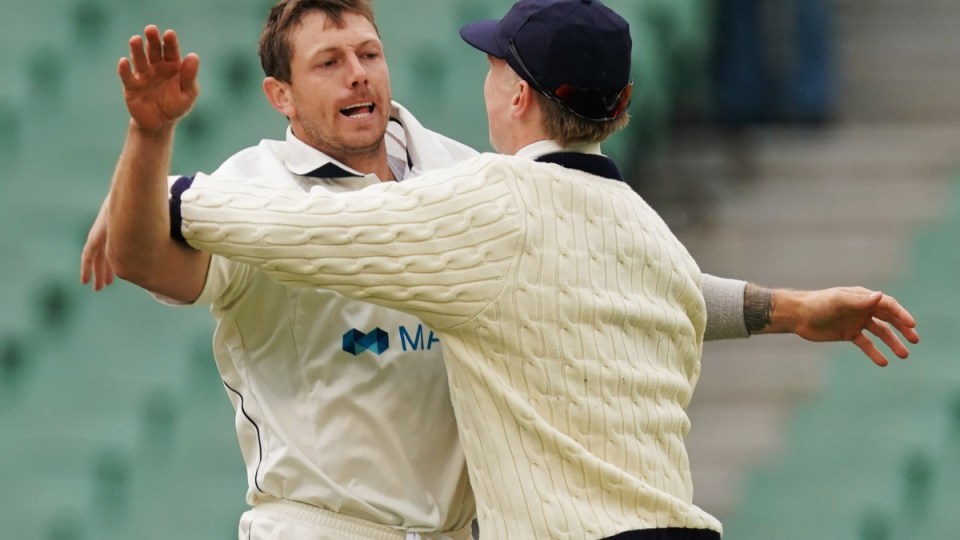 A fired up James Pattinson during the match at the MCG. Photo: AAP

James Pattinson has been suspended from the first Test against Pakistan over an alleged homophobic slur during a Sheffield Shield match for Victoria against Queensland.

Teammates urged firebrand Pattinson to rethink his approach after a “heat-of-the-moment” sledge cost him his chance of an Australian cap against the touring Pakistan team at the Gabba on Thursday.

The Victorian quick on Sunday accepted a one-game suspension, pleading guilty after being reported by umpires for personal abuse of a Queensland player at the MCG last week.

On Monday, Pattinson left the Cricket Australia camp, headed for his home in Victoria.

Team management had reportedly decided it was in Pattinson’s best interests that he took a break with his family before rejoining the team in Adelaide ahead of the second Test.

Before his suspension, Pattinson appeared to be in a battle with Mitchell Starc to join Josh Hazlewood and Pat Cummins in Australia’s pace battery. His ban means an all-NSW bowling attack will take on Pakistan at the Gabba from Thursday.

The level-two breach followed two level-one breaches by Pattinson in back-to-back Shield games in March, and they contributed to his ban as they fell within 18 months.

The Age is reporting the comment was directed towards Bulls paceman Cameron Gannon, who is Pattinson’s Big Bash League teammate.

Accepting his punishment on Sunday, Pattinson said there was no excuse.

“I made a mistake in the heat of the moment,” he said.

“Straight away I realised I was in the wrong and I apologised immediately, both to the opponent and to the umpires.

I have done the wrong thing and accept the penalty. I’m gutted to miss a Test match, but the standards are there for a reason and the fault is mine.’’

Describing Pattinson as an “entertaining, snarly, old-school Aussie fast bowler”, Starc admitted the Victorian might need to adapt to the times.

“He’s that up-in-your-face fast bowler; it’s something that he thrives upon and it makes him bowl better and I hope he doesn’t have to shut up shop completely,” Starc said.

“But he has to be a little more careful of overstepping that line.

“There is a place for it, but perhaps in this day and age he’ll have to tone it back a bit.”

Test captain Tim Paine was less accommodating, saying Pattinson had “let himself and the group down”.

“It’s unfortunate. It doesn’t sit with our values and he knows and understands that,” he said.

“Missing a Test match potentially is a hard thing to deal with, but he’ll learn from it and come back from it.”

Cricket Australia’s head of integrity and security, Sean Carroll, said suspension was the only course of action.

“We have a duty to uphold the highest standards of behaviour and the action taken in this matter demonstrates that,” Carroll said.

“On this occasion, James acknowledges he fell short of that expectation.”

Starc has known some tough times, with the ‘horses for courses’ bowling strategy in England now an accepted part of the Australian strategy.

Rather than kick stones, the 29-year-old made some tweaks and will return to Brisbane with 17 Shield wickets at an average of 17 to go with his great Twenty 20 form for Australia.

“Everything was happening slowly. I didn’t feel the good stuff and positive stuff, but I’ve got rid of the cloudiness of that Gabba game,” he said.

“I’ve had a few good weeks since … it changes quickly. Cricket’s so fickle.”

He said that level-headed approach – which included removing himself from social media – had also helped in England when selectors were looking elsewhere.

“In the past a younger me would’ve thrown the toys out of the cot,” he said of his non-selection.

Team officials emphasised the decision to send Pattinson home was about welfare and not punishment.

Player welfare has been a big issue already this summer with Glenn Maxwell, Nic Maddinson and Will Pucovski all stepping away from the game recently to focus on their mental health.

Cricket: Starc shapes up, with Pattinson out of first Test after Shield sledge