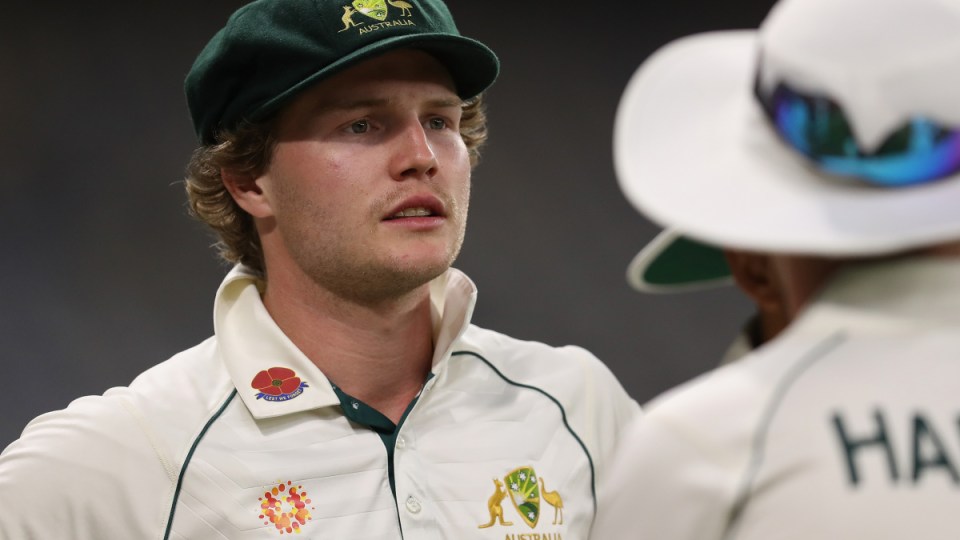 Will Pucovski has asked not to be considered for the Australian squad to take on Pakistan due to mental health issues. Photo: Getty

Broadcaster Alan Jones has taken a sideswipe at Cricket Australia after talented young Victorian Will Pucovski announced his withdrawal from consideration for national selection because of his mental health.

“There’s something not right happening at the moment in Australian cricket,” Jones, a former Wallabies coach, said on his 2GB radio show on Thursday.

“I’ve been in sport at this level for a long time. I don’t understand this.

“The inside word is players are frustrated with the mixed messages and lack of communication from selectors. Whether that’s the issue, I have no idea.”

Pucovski, who was considered a solid chance to be named in the national squad for the first Test against Pakistan, told team management of his decision in Perth on Tuesday night.

The Test begins in Brisbane on November 21.

Pucovski is in Perth playing for Australia A in its three-day tour game against Pakistan.

He is the third local cricketer in a fortnight to approach officials about mental health issues.

Earlier this week, fellow Victorian Nic Maddinson withdrew from selection for the Australia A match, while all-rounder Glenn Maxwell – also from the Bushrangers – last month withdrew from Australia’s T20 squad against Sri Lanka and Pakistan.

Cricket Australia said it fully supported Pucovski’s decision to step back. National teams boss Ben Oliver said CA applauded him “for having the courage to discuss his situation”.

“Will’s decision not to nominate for Test selection was the right one in the circumstances and one that everyone in the Australian cricket family supports,” Oliver said.

“By Will bravely taking this position, he will undoubtedly inspire others facing similar challenges to speak up and take positive steps towards improving their mental wellbeing.”

Pucovski also withdrew from the Test squad against Sri Lanka back in February for mental health reasons.

My heart sank hearing about Will Pucovski’s struggles with his mental health.

Anyone, anytime can be stricken. It’s so debilitating and disorienting and often hard to explain.

The best remedy is love and understanding – and a good doctor 🙏

He and national coach Justin Langer had initially planned to name 12 players but CA confirmed the change of heart late on Wednesday.

There had been growing expectation Pucovski would be named for the Test squad after being moved down the order for Australia A’s second innings.

Travis Head had been competing with him for the vacant middle-order post and it was thought both might be included in the expanded squad.

So often unfortunate to be overlooked, Joe Burns has a golden opportunity to finally cement his spot in Australia’s Test side after being selected to open the batting alongside David Warner in the first Test against Pakistan at the Gabba.

Cameron Bancroft is the surprise selection in the 14-man squad named on Thursday for the two-Test series starting in Brisbane on November 21.

But chief selector Trevor Hohns confirmed Bancroft is the spare batsman, meaning unless there is a late rethink, Burns will open the batting at the Gabba and recalled vice-captain Travis Head will slot into the middle order.

Incumbent opener Marcus Harris has been dropped and there was also no room for top-order stalwart Usman Khawaja, who averages 53 in Australian conditions but has been in underwhelming form over the past 12 months.

Burns’ record of four centuries from just 16 Tests puts him in rare company but the Queenslander has had few opportunities since debuting in 2014.

Australia and Pakistan will also square off in a pink-ball day-night clash at Adelaide Oval starting November 29.