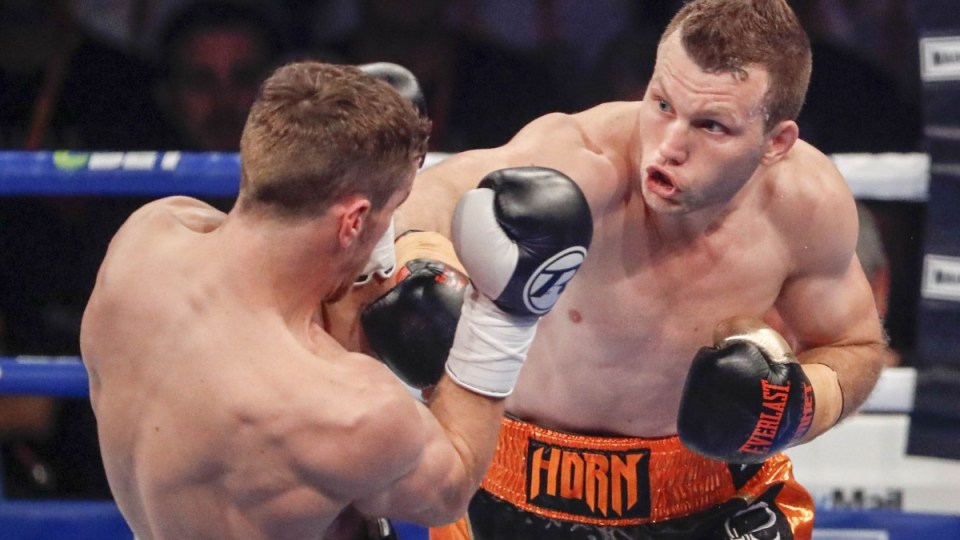 Jeff Horn will carve his name in history when he takes his big right cross to legendary Madison Square Graden. Photo: AAP

A win over American Terence Crawford in Las Vegas this April will make him a great one.

In October, Crawford was voted by the Boxing Writers Association of America as the best boxer in the world, pound for pound, while The Ring magazine has him at No.2, behind only Kazakhstani middleweight phenomenon Gennady Golovkin.

Whichever way you slice it, Horn and his camp have picked an incredibly tough test for what will be the Queenslander’s first fight in the US.

Terms have been agreed to for the April 21 stoush, which will likely take place at the T-Mobile Arena in Las Vegas.

Horn has fought in New Zealand a few times, but the furthest he has ever travelled on business was to the Perth nightclub precinct of Northbridge.

Now, Northbridge is gaudy – but it’s positively monastic compared to what will confront the softly spoken Queenslander in Vegas.

Australian boxers’ American adventures have found their fair share of calamity over the years: think Jeff Fenech’s robbery against Azumah Nelson or Kostya Tszyu’s pummelling at the hands of Vince Phillips.

More recently, Daniel Geale’s losses to Darren Barker, Golovkin and Miguel Cotto serve as a stark reminder of just how tough it is to keep winning once you hit the States.

But Horn’s trainer, Glenn Rushton, said his fighter was looking forward to the challenge of taking on the world’s best.

“We’re not running from anyone,” Rushton told The New Daily.

“If you want to be the best you’ve got to beat the best.”

One thing on Horn’s side will be his size.

Crawford’s definitive victories – so far – have come at lightweight and junior welterweight.

To fight Horn for the WBO welterweight title, he’ll be coming up 3kg to face a man who could outweigh him by much more than that come fight night.

“As a welterweight, he’s not big,” Rushton said.

“He gets hit – and it’ll be interesting to see how he takes the power of Jeff Horn.

“We’re confident of our chances – the bookies aren’t, but we are.”

In the context of Australian boxing, Horn against Crawford is a fight of huge significance.

Not since Geale was blown away by Golovkin has an Australian dared step in the ring with someone regarded as the best in the business.

Horn and Crawford will both be 30 come fight time, and the bout promises to be electrifying.

A win for Horn should erase any doubt Americans have about the veracity of his win over Pacquiao, which many in the US feel was a dodgy hometown decision.

But becoming the first man to beat Crawford won’t be easy, with Rushton all too aware of his many strengths.

“He switches at will from a southpaw to an orthodox stance, that can confuse some people,” Rushton said.

“He’s one of the very few boxers in the world that can do that.

“He’s a brilliant counter puncher, we all know that.

“He’s a great boxer, but we’re up for the challenge.”

While much has been made of the fact Horn began boxing late to help conquer bullies, Crawford was the sort of kid doing the bullying.

A renowned neighbourhood scrapper from a tough area of North Omaha, Nebraska, he’s been boxing since he was seven years old.

Just before his 21st birthday, and after his fourth professional fight, he was shot in the head when he returned to his car after a dice game with his winnings.

The bullet was millimetres away from killing him.

His trainer Brian McIntyre said Crawford, 30, turned his life around after the incident.

“After he got shot, you saw the change in his lifestyle,” McIntyre said in an HBO documentary.

“He changed his crowd, he changed where he went.

Crawford’s proudest moment as a professional was his trip to Glasgow, Scotland, to beat Ricky Burns for the world lightweight title in 2014.

He followed that effort with a successful defence against Yuriorkis Gamboa, in one of the best fights you’ll ever see.

He made one more defence of the lightweight title before heading up to junior welterweight, where he became the undisputed champion of the world.

After his last fight, a KO win over Julius Indongo, Crawford decided to move up to try and become a three-weight world champion.

He was installed as the No.1 contender for Horn’s welterweight title – putting the man from North Omaha on a collision course with the former school teacher from Brisbane.

Terence Crawford, the lord of the ring standing between Jeff Horn and greatness