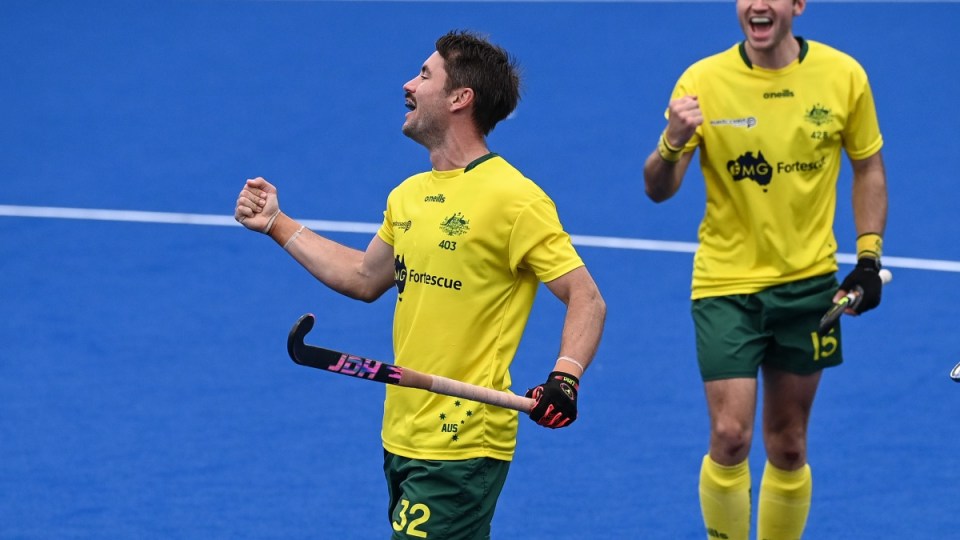 Jeremy Hayward celebrates his goal for the Kookaburras in the 3-1 win over New Zealand. Photo: AAP

Australia has completed a clean sweep of the four-Test men’s hockey series against New Zealand with a 3-1 win in Auckland.

The Kookaburras have not been beaten by their trans-Tasman rivals since 2016 – a record that never looked like ending on Sunday after they raced to an early three-goal lead.

Dual Olympian Blake Govers got the opener in the 11th minute, with Tom Wickham and Jeremy Hayward then scoring two goals in as many minutes in the second quarter.

Hayden Phillips pounced on a loose ball to register a consolation goal for the hosts in the 31st minute.

A close affair after a messy start. The Kookaburras have piled on 3 to NZ's 1.
Govers, Wickham and Hayward with the goals so far.#Prideofthekookas#AusvsNZL pic.twitter.com/TOAI4K6pPR

In an encouraging performance ahead of the Commonwealth Games in Birmingham, the world No.1-ranked Australians scored 19 goals across the four-match series and conceded just three.

But the Black Sticks were at least able to keep the visitors scoreless in the second half on Sunday.

Govers now has 100 international goals in just 114 games in the green and gold.

“I know we’ve won the games, but we have still got a lot out of the series,” said Australian coach Colin Batch.

“It is always good to play another top nation so we are learning a lot from it.”

The Kookaburras will be short-priced favourites to win a seventh straight Commonwealth Games gold in Birmingham.