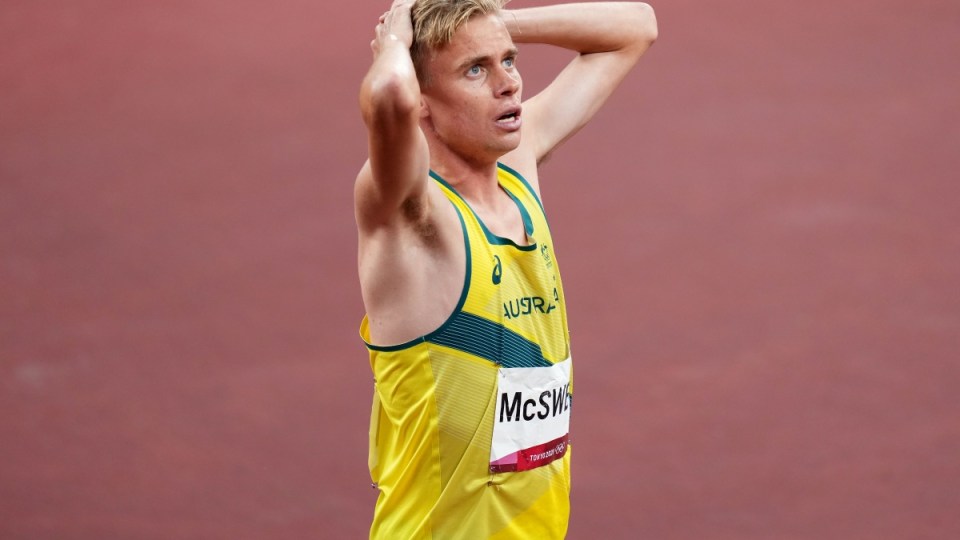 Australian middle-distance superstar Stewart McSweyn has been forced to withdraw from the world indoor championships as he struggles with the after effects of COVID-19.

McSweyn was unable to finish a 5000 metres race in Melbourne on Tuesday night due to breathing problems and will now be sent for respiratory and cardiac tests.

“We need to get an exact diagnosis of what it is,” McSweyn’s coach Nic Bideau told AAP.

“We think it’s down to COVID because this only started when he caught COVID (in January) but you never know.

Athletics Australia is proud to confirm the largest ever Australian team to contest a World Athletics Indoors Championships, with a contingent of 16 athletes ready to compete in Belgrade, Serbia next weekend.

“He’s fine at cruising pace, but when he goes at a really hard pace it’s different.

“He was well clear in front last night, he only had one kilometre to go and he couldn’t make it.

“He wasn’t in any danger of losing, but he just couldn’t run any further.”

McSweyn recently had his COVID booster shot and entered the race in suburban Box Hill in an attempt to prove his fitness for the world indoor championships in Belgrade beginning on March 18.

“That was the acid test,” Bideau said.

“He’s a top-level athlete and I’m not sending him over there to run indoors with the world championships and the Commonwealth Games coming up later this year.”

In the absence of the national 1500 metres record holder, the 15-strong team for the world indoors in the Serbian capital will be headlined by in-form high jumper Eleanor Patterson and Tokyo Olympics decathlon bronze medallist Ash Moloney.

Patterson has made a flying start to the year as the overall winner of the World Indoor Tour in the women’s high jump.

The 25-year-old old broke the Australian indoor record with a clearance of 1.99m in Birmingham last month and will be among the gold-medal favourites.

Moloney will contest the heptathlon in Belgrade in his first indoor competition, where he is expected to shine in the 60 metre sprint, 60 metre hurdles and the field events.

Even without McSweyn, Australia will be well represented in the middle-distance events by a host of world-class performers including Ollie Hoare (1500 metres), Linden Hall (1500 metres), Jess Hull (1500 metres and 3000 metres) and Catrona Bisset (800 metres).

Sprint star Rohan Browning experienced hamstring tendon irritation after racing in Adelaide last month and has decided to give the world indoors a miss, mindful of a busy year ahead.