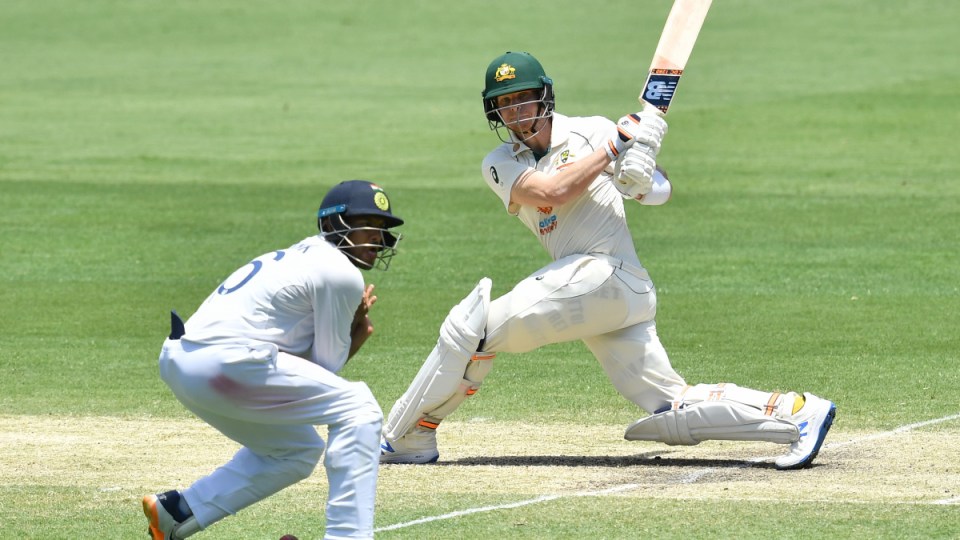 Steve Smith hits the ball into Mayank Agarwal during day four of the fourth Test match in Brisbane on Monday. Photo: AAP

Dropped catches have helped Australia build a 276-run lead at tea on day four of the series-deciding fourth Test at the Gabba, where all eyes are on the rain radar as India await a potential declaration.

Steve Smith led the way with 55 as the hosts reached 7-243, having met spirited resistance from an inexperienced opposition who have repeatedly proven they will not be intimidated.

Siraj, who debuted at the MCG but is now spearheading India’s unheralded attack, then put down two crucial chances after lunch.

The paceman was fielding on the rope when he reprieved Smith on 42 then grassed a return catch offered by Cameron Green on 14.

The tourists, as they have at every juncture since being skittled for 36 en route to a heavy defeat in the first Test, nonetheless kept fighting.

The dismissals of Smith, Green (37) and Tim Paine (27) made quick runs harder to come by, while umpires ended the post-lunch session eight minutes early because of wet weather.

Paine’s team require a victory to reclaim the Border-Gavaskar trophy but further showers are predicted for the final day of the series.

The highest successful chase in a Gabba Test came in 1951, when Australia finished 7-236, but the hosts have fresher memories of how India incredibly salvaged a draw last week at the SCG.

Josh Hazlewood flagged that the forecast may influence the timing of a potential declaration but Australia would likely make an informed assessment after batting for two sessions.

David Warner (48) and Marcus Harris (38) enjoyed a productive start to the day, adding 40 runs during the first seven overs after Australia resumed at 0-21.

First-change bowlers Washington Sundar and Shardul Thakur, who combined in a seventh-wicket stand of 123 runs that rocked Australia’s hopes of an imposing first-innings lead, built dot-ball pressure to ignite yet another momentum shift.

Thakur snapped the 89-run partnership between Warner and Harris – the highest opening stand that either side has managed during the four-Test series.

Warner departed the following over after being trapped lbw by offspinner Sundar.

Siraj then blasted out the leading run-scorer of the series Marnus Labuschagne and Matthew Wade in the 31st over.

Wade ensured speculation about his place in the XI would continue, falling for a third-ball duck when keeper Rishabh pocketed a leg-side edge.

Aussies lead as series-deciding fourth Test hangs in the balance