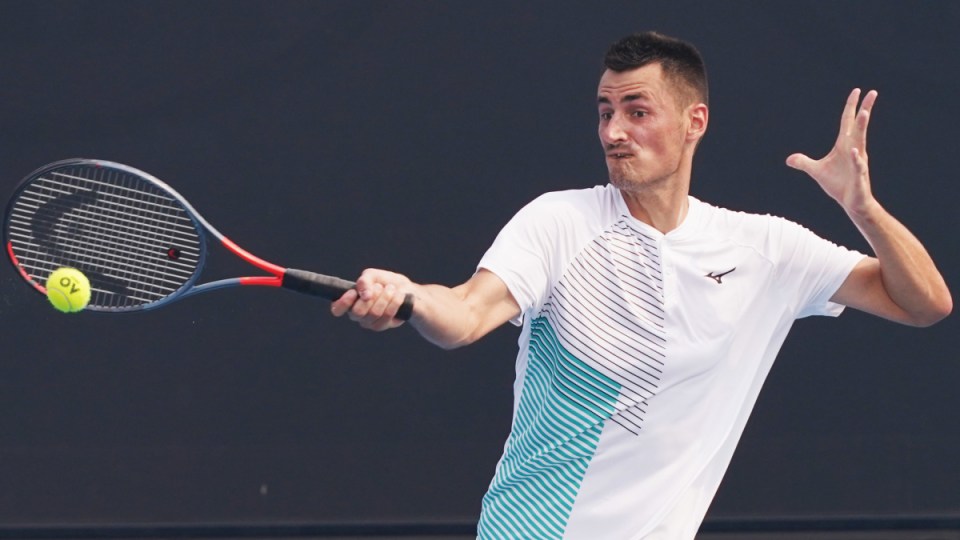 Bernard Tomic took the first step towards redemption with his qualifying win in Doha on Monday. Photo: AAP

Bernard Tomic is two wins away from an 11th Australian Open appearance after battling for more than two hours to take his first-round qualifying match in Doha.

Fetching his own balls without ball kids and playing before no crowds, a focused and determined Tomic outlasted Slovakian Jozef Kovalik 6-4 3-6 6-4 in a sweat-soaked baseline grind on Monday night.

Australia’s one-time world No.17 broke Kovalik in the first and last games of the epic encounter and fought many mental and physical demons in between.

Without a top-level tour win in 18 months and having earned just $US23,684 during his COVID-ravaged 2020 campaign, Tomic has plummeted to No.228 in the rankings.

But the fallen star showed no signs of the back injury that forced his retirement from a UTR match in Brisbane last month as he overcame an opponent ranked almost 100 places above him.

“I’d love to qualify for the Australian Open. I’ve played so well there in the past 10 years,” Tomic said.

“A few times I’ve made the third round, three times the fourth round. So it’s been an unbelievable tournament for me.

“I hope I get my chance in the draw. So I’ll try. I haven’t played much tennis. I only started practising a couple of months ago so there’s not much to expect.

Straight down to business in Doha 🔥 @jpatsmith#GoAussies | #AusOpen | #AO2021 pic.twitter.com/DXWnQ3bnfd

But Olivia Gadecki was the only Australian winner in early day-two action of women’s qualifying in Dubai.

The Gold Coast teenager staged a spirited fightback to down Belgian Lara Salden 2-6 7-5 6-3 as several of her more-fancied compatriots bowed out to higher-ranked foes.