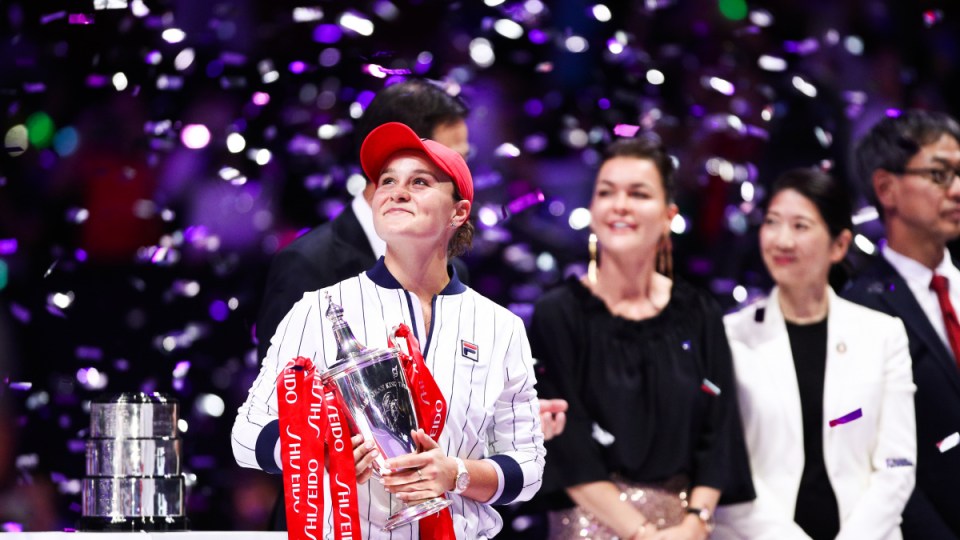 Champion Ashleigh Barty celebrates with the trophy after winning the Women's Singles final match against Elina Svitolina of Ukraine on Day eight of the 2019 WTA Finals. Photo: Getty

She’s the first Australian woman to finish the season with the top world-ranking since her hero Evonne Goolagong Cawley in 1976. Now Ash Barty’s efforts in 2019 have paid off – big time.

“It’s been the most incredible year for me…a new era for women’s tennis,” she said after the match.

The victory scored the Aussie a whopping $US4.42 million ($6.4 million AUD) in prize money – the biggest ever cheque in both male and female tennis history. Not a bad pay packet for a 23-year-old.

Add it to her No.1 ranking, and a recent Grand Slam, and Barty finishes the season on top of the world. She has come a long way, considering the talented cricketer only returned to professional tennis in 2016.

But fame and fortune doesn’t seem to be changing Barty, who described herself as “boring” and not needing much. Instead, she wants to spend a portion of the prize on Christmas gifts for three-year-old niece Lucy and near-two-year-old nephew Oscar.

“I’ve got everything that I need,” she told AAP after her victory.

“I know Luce and Oscar are very keen to learn how to play tennis so I think that’s going to be pretty special to try and get a racquet in their hand. They already run around with a racquet, it’s amazing.

“So, look, I mean the amount of zeros you have in the bank account doesn’t change how I’m going to spend my off-season and spend time with my family.”

That's the match and the title!@ashbarty beats Svitolina 6-4, 6-3 to win the Billie Jean King Trophy at the @SHISEIDO_corp @WTAFinals Shenzhen! pic.twitter.com/eiiiXs84rY

Barty added that spending time away from her family was the hardest part of touring.

“It’s great that I can buy them things that they love but I live a pretty simple life. I’m not living an extravagant life,” she said.

“I’m pretty happy in my little house at home. I’ve got everything that I need. I’m pretty boring. I don’t really spend a lot on myself.”

Barty – who was last year named an official National Indigenous Tennis Ambassador – follows in the footsteps of her idol Goolagong Cawley, her inspiration “on and off the court” since she was a child.

No player – not even Roger Federer, Rafael Nadal or Serena Williams –has ever received such riches from a single tournament.

The prize might have been even bigger had she progressed through the tournament undefeated, but she was off to a rocky start with a round-robin stage loss to Kiki Bertens.

“I feel like we’ve earned that right to be recognised more as a global sport.”