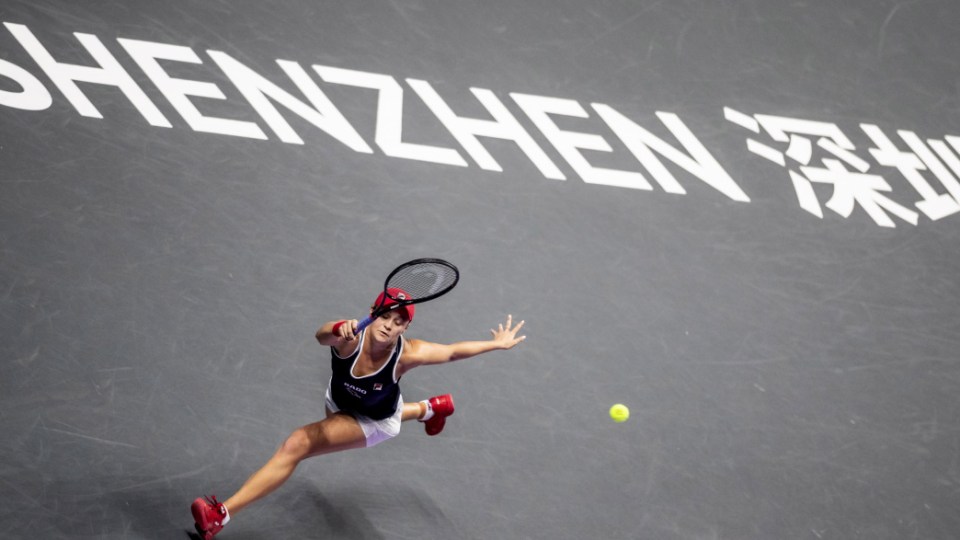 Ashleigh Barty in action against Karolina Pliskova of Czech Republic at the WTA Finals. Photo: AAP

Ashleigh Barty is humbled by the constant comparisons to Evonne Goolagong Cawley and says she’d be satisfied to carve out a career half as successful as her mentor and idol.

Barty is joining Goolagong Cawley in the tennis record books with seemingly every big win she has – and she did so again in reaching the final of the prestigious season-ending championship in Shenzhen.

The 23-year-old’s gallant effort in beating three top-10 rivals to make the title match at the $14 million WTA Finals continued a phenomenal season of firsts.

First Australian woman to claim the world No.1 ranking since Goolagong Cawley in 1976. Tick.

First world No.1 to lead Australia to a Fed Cup final without losing a singles and doubles rubber since Goolagong Cawley 43 years ago. Tick.

And now the first Australian to qualify for the final at the elite eight-woman season climax since Goolagong Cawley in 1978. Tick.

“Just being in the same sentence is a little bit mind-boggling,” Barty told AAP after her impressive 4-6 6-2 6-3 semi-final victory over world No.2 Karolina Pliskova.

We’ve had some pretty special moments this year and I’d love to reach some of the other accolades as well that Evonne had. She’s an incredible human being.”

Inspired by Goolagong Cawley “on and off the court” since she was a child and named last year as an official National Indigenous Tennis Ambassador, Barty is honoured enough to call the seven-times grand slam champion a friend let alone to be matching some of her feats in the sport.

“It’s amazing that we share a connection in our heritage and culture and now we’re kind of growing in our connections in tennis as well,” Barty said.

“It’s really amazing to be able to share that with her.”

Barty’s win over Pliskova marked the 13th time this year she’d battled back from a set down, and it thrust her into a tour-best sixth final of 2019.

“It’s been an incredible year for myself and my team. It’s the perfect way to cap it off,” Barty said after earning the right to play defending champion Elina Svitolina for the biggest cheque in tennis history, a potential $6.4 million pay day.

“The biggest thing, it’s been a growth of women’s sport. For me individually, and I think for all of us players individually, it’s not something we think about,” Barty said of the extraordinary prize money.

“It’s more of kind of a general progression of putting our sport more on the map.

“We have the most beautiful sport, it’s a global sport. Now we’re getting more attention. I feel like we’ve earned that.”

Tennis: Even at No.1, Barty is humbled by comparisons to Goolagong