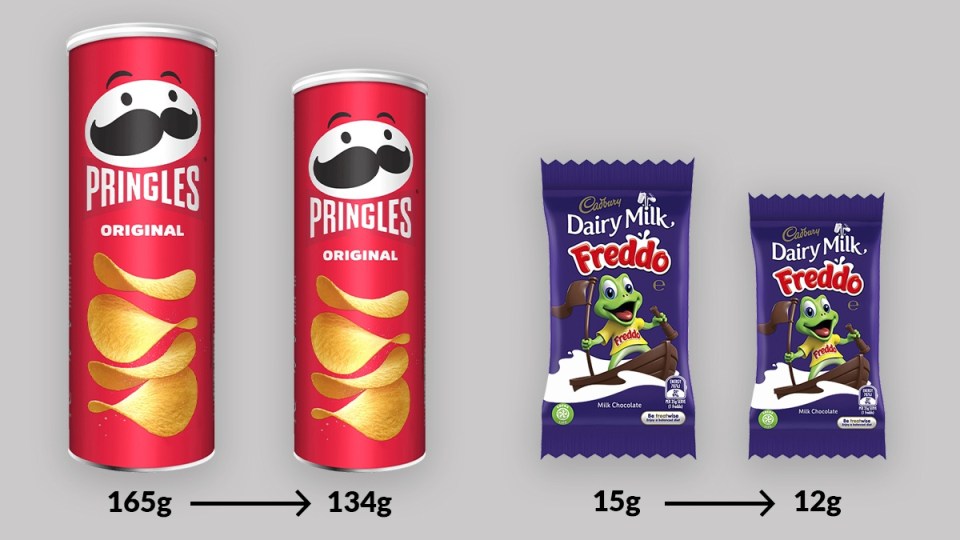 The price of items such as a packet of Pringles or a Freddo frog remain the same, but sizes have shrunk. Photo: TND
opinion

Freddo Frogs were reduced from 15g to 12g – but the price stayed the same. New varieties of Tim Tams mostly have nine biscuits in a pack, not the 11 biscuits you’ll find in the original pack. Many brewers have shrunk the size of their beers down from 375ml to 330ml, while some winemakers are selling 700ml bottles rather than the usual 750ml.

Dubbed ‘shrinkflation’ by US economist Pippa Malmgren, the term refers to a cunning trick that manufacturers like to pull: Selling us less product for the same price. In recent times, Maltesers fun-size bags have dropped in weight from 144g to 132g. Smiths chips have shrunk from 200g to 170g. A tube of Pringles has downsized from 165g to 134g.

It’s not just food that’s shrinking. Some years ago, Kimberley-Clark admitted to shortening the length of each square of toilet paper from 11cm to 10cm. The Australia Competition and Consumer Commission took several detergent manufacturers to task for slyly making their product less concentrated.

The problem is so insidious that the Australian Bureau of Statistics has had to specifically take account of shrinkflation in their measurement of consumer prices.

And then there’s housing, where the cost of an apartment today exceeds the cost of a house a decade or two ago.

Shrinkflation might not be so bad if real wages were growing. But when it comes to pay packets, the last decade has been a shocker. In the entire period since World War II, there’s never been a worse decade for real income growth – and that holds true even if we exclude the COVID pandemic.

According to the Morrison government’s latest budget, real wages are set to fall by 1.5 per cent this year, making the average worker $1355 worse off.

Part of the problem is that productivity hasn’t grown. Since 1901, Australian workers have become steadily more productive, producing more in a day today than in a week back then. Productivity growth is the main reason that we earn more than our great-grandparents.

Yet today, productivity has stalled, and workers are feeling the pinch. Inflation – and its insidious cousin shrinkflation – are hurting households. The budget provided temporary relief, without any long-term solutions.

It requires building roads based on where they will have the biggest economic impact, not the biggest political payoff for the government in power. With a COVID-induced rise in teleworking, productivity requires a full-fibre NBN – not a patchy copper substitute.

Boosting productivity and wages is as hard as it is vital. But it requires a government with a big ambition for Australia. Instead, we’ve got a complacent Prime Minister with a meagre vision for the nation. The Morrison government’s shrunken ambitions threaten to downsize Australia, and that’s the worst cut of all.

Andrew Leigh is the shadow assistant minister for Treasury. Visit his website here.

Honey, I shrank the groceries: Manufacturers are pulling the wool over consumers’ eyes