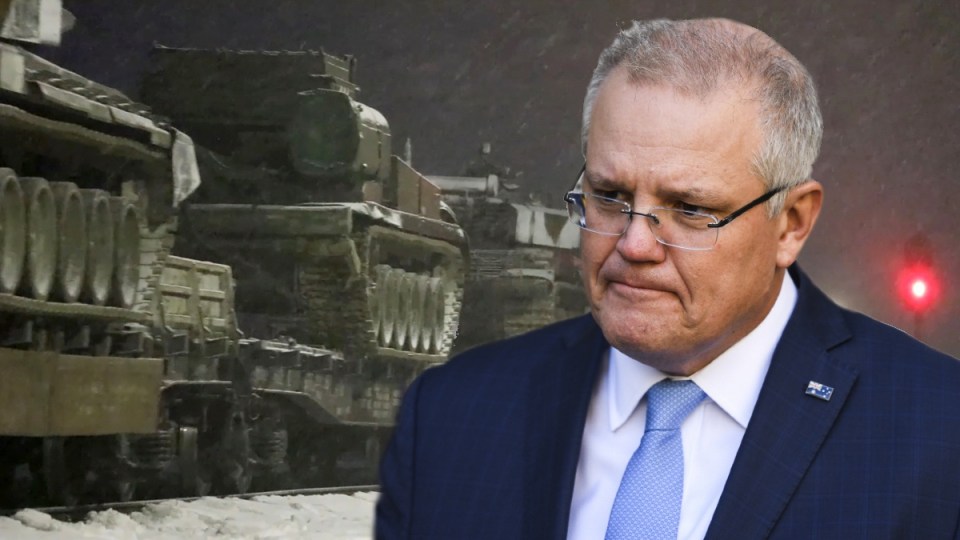 Scott Morrison has left the door open to a wider sanctions regime.
opinion

What the world needs in response to the Ukraine disaster are constructive and mature policies. That’s not Australia’s position.

Once again, Australia has demonstrated just how much it likes to follow the leader.

Australia has few interests and even less influence in eastern Europe, yet the Morrison government has been strident in its condemnations and quick to sign on to US and European economic sanctions.

On the other hand, Australia’s investment in Russia is about 23 times greater than Russian investment in Australia.  So the cost of Australian-imposed economic sanctions is more likely to hurt us than President Putin.

The Morrison government, like the Abbott government when Russian troops shot down MH17, loves to muscle-up.

Abbott famously threatened to shirtfront Putin but had him cuddle a koala instead.

Putin was doubtless suitably chastened, and the koala survived. But in the international arena, barracking from the bleachers is always seen for what it is – an admission of impotence.

In this case, Australia has again shaped its response to Russia’s invasion by adopting the rhetoric of the US, applying economic penalties that may well prove to be a two-edged sword.

SWIFT is an important, though largely invisible, part of the international rules-based order that Australia likes to support with almost evangelical zeal.

But to deny Russia access to the global payments system may well create a perverse incentive.

Along with its Western investors – especially in the energy sector where they have significant exposures – Russia may circumvent sanctions by establishing back doors or creating a new payments system that leverages the economic strength of China.

And India’s very constrained response to the invasion of Ukraine suggests that, for its own purposes, it might be open to an alternate payments system.

Any further erosion of the power of the US dollar as the key underpinning of the world’s reserve and payments system would further weaken the already diminished status of the US as the predominant global power. That is not something that Australia should welcome.

‘Me-tooism’ prevents original thinking. So we limit our response to the tragic events unfolding in Ukraine by adopting punitive sanctions with little regard to their consequences.

Australia has other options.

As a well-endowed power with considerable economic strength and formidable natural security assets (our remoteness and the absence of land borders chief among them), Australia should focus its actions on where it might have some impact.

Two opportunities come to mind immediately: Advocating and investing directly in the rules-based order about which we love to preach; and re-investing in an active arms control and disarmament diplomacy.

The future of global security lies in global rules and their observance.

To be rule-takers, however, states must be rule-makers. Among the leading powers, China, India, and Russia consider that they were excluded from the rules-setting that followed WWII. So, too, do many of the nations that emerged from the decolonisation processes that followed the decline of empires.

All of them have some justification for their view.

Living as we do at the intersection of post-colonial Asia and the post-colonial Pacific, Australia has a major stake in ensuring that global rules work to the advantage of our neighbours and ourselves.

This involves two related fields of diplomacy. First, we need to promote the reform of the UN and its major institutions to ensure that the interests of all nations are accommodated in the global distribution of the benefits that the rules confer.

And second, we need to support the regional organisations and subsidiary institutions that give expression to regional rule-making and rule-taking.

Foremost among these are ASEAN and the Pacific Islands Forum (PIF), both of which focus on stability and prosperity as the key to national security. In this context, security-focused sub-bodies, such as the ASEAN Regional Forum, are critical to Australia’s ability to substantiate and promote our broad security interests.

President Putin’s recent rhetoric has explicitly threatened nuclear weapons use against anyone who might seek to use armed force against Russia.

This is not simply “unacceptable”, to channel Prime Minister Morrison. It is a direct repudiation of the right of humanity to life and happiness. Only a state with nuclear weapons can threaten humanity’s extinction.

Australia was once an active player in the international community’s efforts to eliminate nuclear weapons.

But for the past quarter century, we have preferred to hide behind the US nuclear arsenal for our ultimate defence, rather than promote nuclear disarmament.

Australia can do better.

Allan Behm is director of the International & Security Affairs program at The Australia Institute, Canberra. His new book No Enemies, No Friends (Upswell) was released on March 1.

The Ukraine crisis: Australia can do better in its response to Russia’s invasion