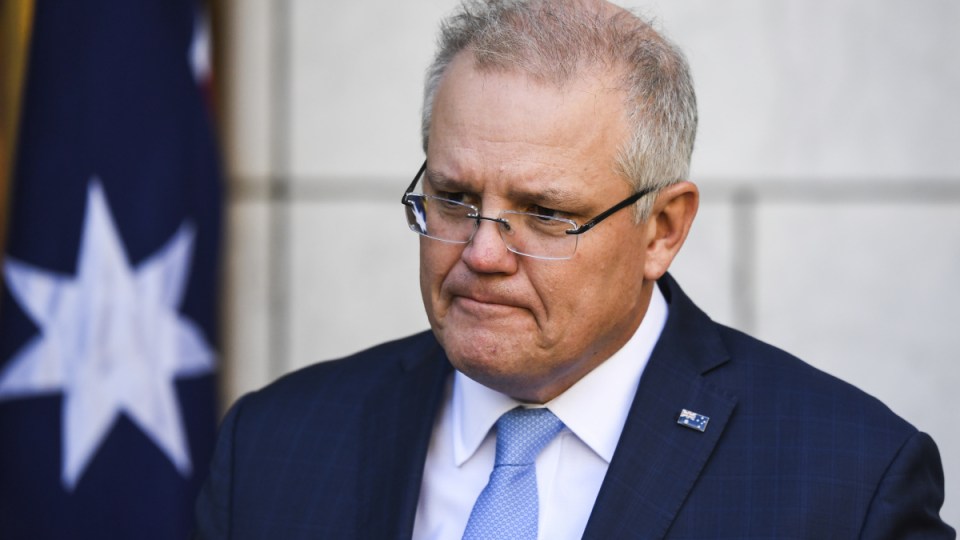 The Prime Minister is flagging in the polls as disunity and doubt increase. Photo: AAP

Australia has left itself considerable room for manoeuvre in taking punitive measures against Russia after its President Vladimir Putin ordered troops be deployed to two breakaway enclaves in eastern Ukraine.

Prime Minister Scott Morrison announced economic sanctions on Wednesday in response to the fast-evolving situation in the area.

“This is only the start,” Mr Morrison said of the targeted sanctions against prominent Russian individuals and travel bans to be applied in retaliation for Mr Putin’s incursion.

He said the swift action was necessary to send a strong response to Russian “bullies and thugs” in Ukraine.

Australia joins the US and UK in placing sanctions on several Russian banks, target the finances of members of the elite Russian security council, and seek to fast track visa applications for those currently in Ukraine.

Although Australia’s response was rhetorically forceful, there was still considerable room to respond to the Russian state, the country’s top experts say.

“This is a graduated first step,” said Matthew Sussex, the academic director at the National Security College at the Australian National University.

“You would expect to see more if Russia does more, which is almost certain,” Dr Sussex said.

“Australia does not have an awful lot of skin in the game. When it comes to Ukraine, it doesn’t seem to have a lot of ability to hurt Russia,” he said.

Dr Sussex said the sanctions were more to do with “Australia’s words”.

“Australia always stands up to bullies.

Although the UK’s targeted sanctions applied to individuals associated with Mr Putin’s personal wealth, Australia seeks to target those with political affiliations with the Russian President, specifically eight members of its security council.

The council, at least notionally, is charged with taking all major decisions on Russia’s national security. In reality it is more like a rubber stamp to the president’s ambitions.

But Dr Sussex said its members, including Foreign Minister Sergey Lavrov and former prime minister Dmitry Medvedev, were representative of the major “clans” in the Kremlin.

The US took action to limit Russia’s access to international financial markets to service its primary sovereign debt and against certain major Russian banks, and members of the country’s elite.

The European Union is targeting more than 300 Russian parliamentarians, while Germany has stopped certification for the Nord Stream 2 pipeline.

The UK will also target banks and prominent individuals.

Dr Kirill Nourzhanov is an expert in Russia’s relationships with the former Soviet Union. He argues that the entire western response to the deployment of troops to the “people’s republics” of Donetsk and Luhansk had been underwhelming.

“Of course, Biden said that it’s the beginning of the invasion, but the reaction was weak,” the ANU senior lecturer said.

“And the impact of the Australian sanctions on Russia will be exactly zero. It’s waving the flag – ‘all the way with LBJ’ – but nothing serious.”

Dr Nourzhanov similarly said that Britain had not taken strong measures to match the rhetoric offered by its Prime Minister and staunch critic of the Kremlin, Boris Johnson.

“The bulk of the Russian elite is enjoying a nice, relaxed lifestyle in Britain, more so than in any other country in the West,” he said.

“I think Johnson made the prudent decision not to rock the boat, not to scare off these extremely rich people just yet.”

Just as critics say Mr Johnson could do more to target Russian wealth, Australia has plenty of options remaining at its disposal, notwithstanding our relative distance from the conflict’s epicentre.

Russia’s ambassador was called into a meeting at the Department of Foreign Affairs on Wednesday but was not dismissed.

Whether further escalation follows, or if, as Dr Nourzhanov predicts, a “strategic pause” intervenes, remains entirely to be seen.

Experts say Australia has room to move on Russian sanctions