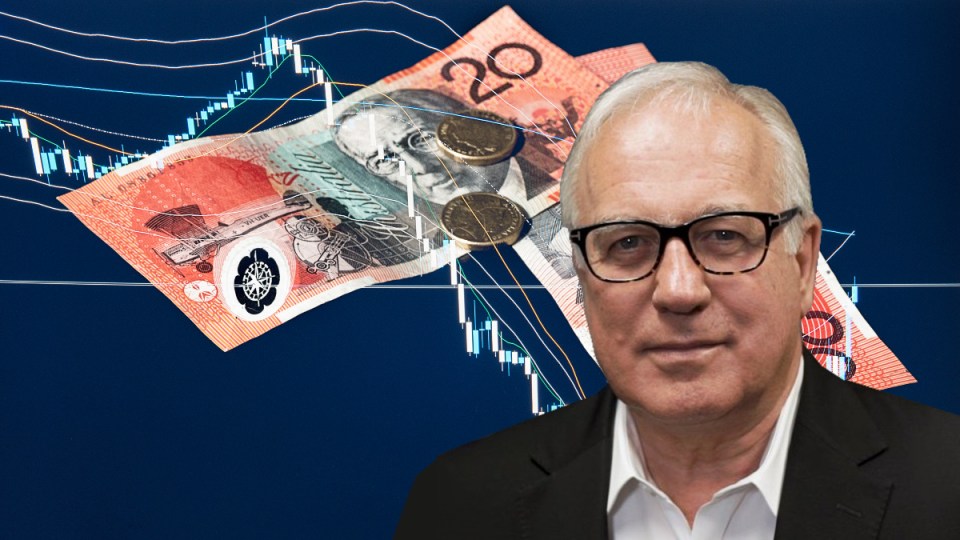 Scott Morrison’s can-do capitalists can’t really do wage rises, not for the past decade anyway.

And now they’re demanding to get their imported ‘slaves’ (aka temporary visa holders) back again, to put a lid on wages.

There have been times when wages went up a lot in this country, notably in the 70s and late 80s, brought to a halt by the Accord of 1983 and the recession of 1991.

Then came John Howard in 1996 and the permanent fix of temporary migrant workers.

Now we are about to enter the 10th year of real wage stagnation in Australia – wages minus inflation per worker have been unchanged since 2012.

That has meant that real household disposable income has also stagnated … that is, until the pandemic of 2020, when a big lift in both household income and real labour compensation was entirely due to government benefits, not capitalism. 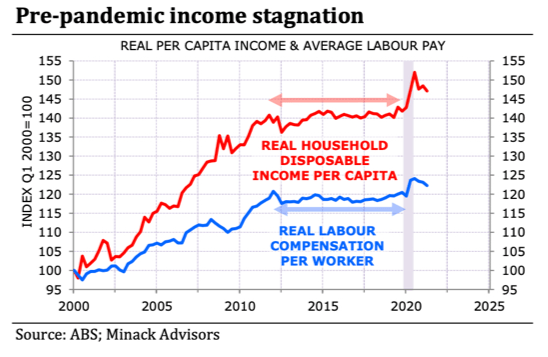 Rate hike some way off

On Tuesday, Reserve Bank governor Philip Lowe highlighted the lack of wages growth and said he wants it to be “3 point something” before interest rates can be increased again, which he is plainly keen to do, to get things back towards normal.

But Australian businesses are keen to keep it that way, in direct conflict with the RBA.

In his speech on Tuesday, Dr Lowe talked about the inertia that’s inherent in Australia’s wage-setting system, specifically “multi-year enterprise agreements and the annual minimum wage case”, which moves slowly, in increments, and underpins a lot of wages, especially at the low end.

He also talked about the “strong cost control” mindset of Australian businesses, which is a nice way of saying they’ll do anything to avoid paying more cash.

The way Dr Lowe politely put it was: They are “seeking to use measures other than raising base wages to attract and retain staff”.

What he didn’t talk about this time is immigration, although he has in the past.

In July, in a speech titled “The Labour Market and Monetary Policy”, Dr Lowe referred specifically to firms hiring workers from overseas to suppress wages, especially for lower-paid jobs.

He noted that at the time of the last census in 2016, there were 430,000 people working in Australia on temporary visas, either categorised as skilled workers or students.

In other words, those coming in on the skilled migration programme are not necessarily particularly skilled.

Dr Lowe went on: “This hiring dilutes the upward pressure on wages in these hotspots and it is possible that there are spillovers to the rest of the labour market. This hiring can also dilute the incentive for businesses to train workers to do the required job.”

Unsurprisingly, the cancellation of immigration as a result of the pandemic is starting to put some upward pressure on wages, evident in yesterday’s figures from the ABS.

But now farmers and businesses are demanding to let the foreign workers back in on temporary visas so they don’t have to pay Australians more to pick fruit and wash dishes.

So the question of what happens to wages, inflation, interest rates and therefore the economy as a whole will now largely come down to how quickly the levels of permanent and temporary immigration are restored to where they were, especially temporary visas.

John Howard introduced 457 temporary work visas soon after becoming Prime Minister in 1996 and then doubled the overall net migration in 2005.

Both of these acts were industrial strategies specifically designed to suppress wages, and it was supported by the “stop the boats” asylum seeker strategy that kicked off with Tampa in 2001 and was designed to make Australia’s xenophobes think the Coalition was tough on migrants when in fact, it was anything but.

It worked. By 2016, close to half a million temporary workers were in Australia at any one time, creating a pool of labour that drove wages down, while at the same time the Coalition was seen as tremendously tough on keeping foreigners out. Optics is everything!

It was a brilliant strategy that led to a huge transfer from wages to profits, but it came to an abrupt halt last year when the Morrison government simply closed the borders.

That took a while to take effect because the closure was two-way – the temporary visa holders who were already here couldn’t leave.

But gradually they did, and now restaurant owners are complaining that dish washers are demanding $50 an hour. Naturally, they want the ‘slaves’ back.

The RBA governor, on the other hand, would rather wages went up some more.

This is the most material economic decision to be made by whoever wins the next election.

Alan Kohler: Farmers and business demand Morrison give them back their ‘slaves’