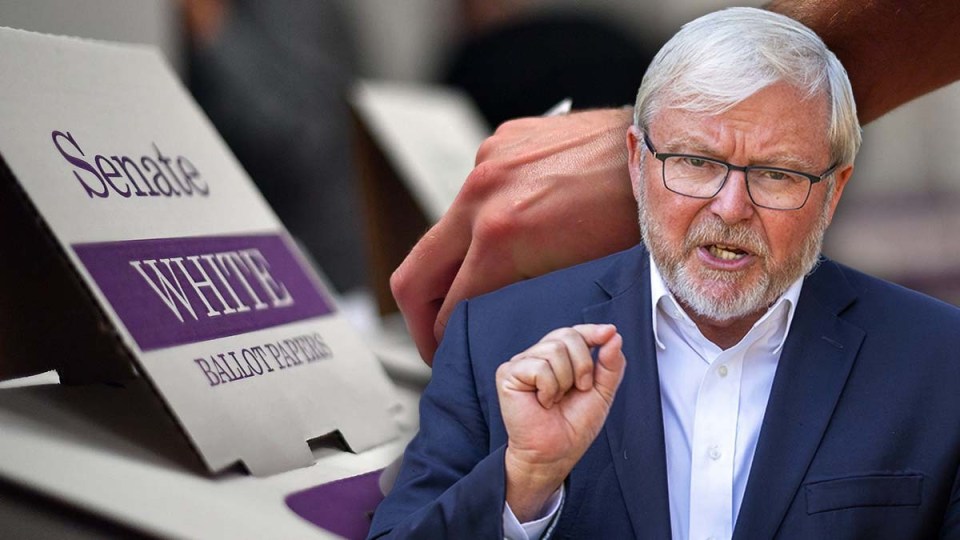 At first glance, demands that voters produce their papers may sound reasonable. But, as someone who has lived in America for most of the past decade, let me assure you: there is no formulation of these laws that won’t undermine universal suffrage and deliver a less representative parliament.

If this law is passed, expect to see polling booths crawling with partisan lawyers aggressively challenging the legitimacy of voters who – for whatever reason – they have profiled as being unlikely to vote for their party.

In America, voters have been blacklisted over inconsistencies including maiden names, slight variations in spelling, missing hyphens and even accent marks.

They pretend these laws are needed to defend elections against the possibility of double-voting – a risk that the Australian Electoral Commission describes as “vanishingly small”, with only about 20 irregularities referred to police from the last election and no prosecutions.

But this is a fig leaf.

If Morrison really cared about protecting our democracy, he would demand real-time disclosure of political donations (donors can currently evade disclosure for more than a year).

He would insist on a powerful and independent federal anti-corruption commission to investigate and expose the abuse of taxpayer funds.

He would want tighter controls on pork-barreling in marginal seats, and laws to prevent MPs like Christian Porter accepting secret donations through so-called “blind trusts”.

That Morrison’s priority is voter ID – a solution in search of a problem – tells you this has everything to do with stealing elections for the Liberal Party.

I describe this as Morrison’s Law, but its mastermind is actually Queensland senator James McGrath – a disciple of the electoral dark arts championed by Donald Trump’s Republicans and Rupert Murdoch’s Fox News.

For political mercenaries like McGrath, mass participation in our democracy comes second to entrenching an undemocratic advantage for his side of politics.

Under McGrath’s take-no-prisoners bill, anyone who cannot produce certain types of matching government-issued identification would be refused an ordinary ballot. Instead, they would face a convoluted set of alternatives that risk clogging up polling places and extending queues.

When voting becomes an ordeal, only the most committed partisans are willing to suffer through it. And rather than appealing to the sensible centre, political parties will feel pressure to appeal to the fringes.

This is, of course, the point. McGrath is on the record as an opponent of compulsory voting.

He lamented in 2018 that the incentive to “offend the least number of voters” was having a “chilling effect” on pushing through extreme policy agendas.

Some may ask, who doesn’t have matching ID? One of my good friends is an elderly Catholic nun who doesn’t drive and doesn’t have a passport. In states like South Australia and Queensland, drivers aren’t legally required to carry their licence. Many Australians don’t carry their Medicare card with them, or it doesn’t match their name on the electoral roll.

That’s even before we get to the particular challenges around people with unstable housing, survivors of domestic violence and our First Australians.

A master campaigner, McGrath’s slogans sound convincing. He rattles off European countries that require ID, but ignores that many of those governments issue compulsory national identity cards – an idea previously condemned by the Liberal Party as a “Stalin card”.

McGrath insists no voters would be frozen out, since they will be offered a “declaration vote” – a special ballot that takes longer to complete and won’t be considered until after election night.

But there are several flaws in this logic.

First is the capacity of the electoral system to handle large numbers of declaration votes. There were around 1.2 million of them at the last election, and this number would shoot up under McGrath’s bill.

Unless the government is proposing to fund extra polling booths in every electorate and more staff, the queues outside polling places will lengthen.

The results will also take longer to count. Where does that end? Look at Donald Trump, who last year insisted that votes counted after election night was illegitimate. These fraud conspiracies were amplified by Murdoch’s Fox News such that one-third of Americans believe Joe Biden didn’t actually win.

Murdoch’s print monopoly and Sky News Australia (which was probably even more strident than Fox in backing Trump’s claims) stand ready to do the same here.

Third is the effect on vulnerable populations, especially Indigenous people. When the conservatives proposed similar laws in Queensland last decade, the former social justice commissioner, Mick Gooda, warned Indigenous voters “may feel intimidated by the requirements to fill in extra paperwork and being treated differently to other voters”.

This is understandable; white Australia doesn’t have a great history of singling out Indigenous folks for special treatment.

“I worry that intending voters may not continue to complete their ballot if required to go through the declaration vote procedure,” Gooda said.

This is, once again, part of the plan. These laws are born from the same deeply undemocratic instinct among Queensland conservatives, who governed under a corrupt gerrymander for more than two decades.

In those days, Aboriginal communities were carved out of marginal electorates and, like West Berlin, counted as detached exclaves of safe Labor seats.

Of course, McGrath’s record of sensitivity to racial inequity is infamous. In 2008, he was sacked by London mayor Boris Johnson for telling a journalist that residents of Afro-Caribbean heritage offended by racist slurs: “Let them go if they don’t like it here”.

The bottom line is that McGrath’s law is designed to enhance the voting power of hardcore partisans at the expense of ordinary working families and vulnerable Australians.

It is a backdoor assault on our democracy, and I urge senators to reject it.

Kevin Rudd is a former prime minister of Australia.

Kevin Rudd: Morrison’s voter-ID laws are a backdoor assault on our democracy