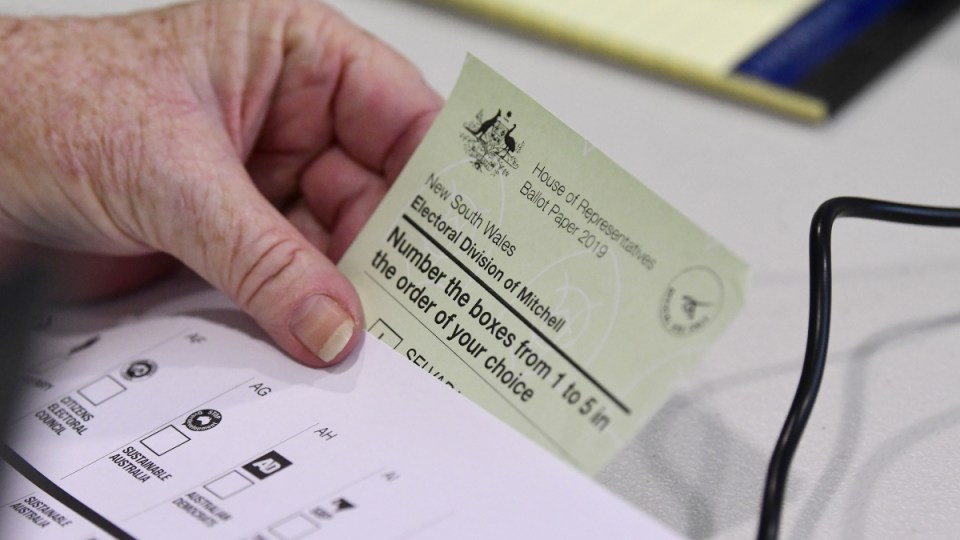 Proposals for voter ID laws have been slammed. Photo: AAP

Coalition plans to introduce voter ID laws at Australian elections have been slammed as “Trumpian” by parliamentary opponents, sparked by reports the government may look to implement such measures ahead of the next ballot.

Labor, the Greens and several Senate crossbenchers have already pledged to oppose any such moves, if they came to a vote, but the concept may already have the backing of enough members in the upper house to see it pass.

“This thought bubble is straight out of the Donald Trump playbook,” claimed Opposition Leader Anthony Albanese.

The Coalition party room agreed to a proposal of so-called ‘voter integrity’ legislation on Tuesday.

The legislation has not been introduced into Parliament, but The Guardian reported it would force Australians to present identification at the ballot box, in a measure aimed at preventing electoral fraud like multiple voting.

Australia does not currently have such laws.

Voter ID legislation is a controversial topic in the United States, where critics say it leads to voter suppression or discourages voting – particularly among communities who may not have valid identification including those of low socioeconomic status, migrants, people of non-English-speaking backgrounds, the homeless, or First Nations people.

The Australian Electoral Commission told a Senate estimates hearing on Tuesday night it detected just 2100 instances of multiple voting at the 2019 election, or about 0.01 per cent of all ballots cast.

The reported voter ID proposal was instantly savaged by Labor and the Greens on Wednesday.

“This will drive people apart, pitting Australians against each other, just like we’ve seen Trump do in America,” he told The New Daily.

“There is no evidence this is needed. It is a disgraceful proposal from the Morrison-Joyce government which is out of touch and out of sync with Australia’s democratic electoral traditions.”

Labor’s shadow special minister of state Don Farrell claimed the proposal would exclude those who don’t have access to identification documents.

“Instead of working for all Australians, Scott Morrison is working to ensure that those who might not vote for him, can’t vote against him,” he claimed.

Greens’ spokesperson for democracy, Larissa Waters, said AEC figures showed there was little problem to solve, slamming the proposal as “Trumpian politicking on the eve of an election”.

A spokesperson for Special Minister of State Ben Morton declined to respond to specific questions on the proposal when TND approached his office, but said he would have “more to say in the coming days”.

“We have one of the best electoral systems in the world, but that doesn’t mean we cannot, should not, pursue all opportunities to further enhance its integrity, further enhance public confidence,” he said.

Senator Birmingham responded that confidence in elections could be undermined by “actual areas of risk” as well as “perceived threats”.

AEC officials told the estimates hearing “we’d certainly want a voting system where no Australian was turned away and denied the opportunity to vote”.

The director of the group’s First Nations justice campaign, Larissa Baldwin, warned it would lead to “voter suppression”.

“These punitive voter ID laws will see First Nations people turned away from voting on election day just because they don’t have the right identification documents,” she said.

“We need measures that make it easier for First Nations people in remote communities to cast their vote, not disenfranchise them.”

No legislation has yet been shared, but at least three of the five Senate crossbenchers are already considering supporting the proposal.

With Labor and the Greens opposing any such voter ID proposal, the government would need at least three crossbenchers to pass such laws.

One Nation senator Malcolm Roberts earlier this year proposed his own election ‘integrity’ bill, which also would have required identification before voting.

A Senate committee of Labor and Coalition members unanimously recommended that bill not to be passed.

Liberal senator Claire Chandler, the committee’s chair, wrote that “there are existing scrutiny measures in place which ensure the integrity of federal elections, including the detection by the AEC of the rare occurrence of multiple voting … These existing measures already act to complement the stated aims of this bill’s proposed voter identification measures”.

However, government members of the parliament’s Joint Standing Committee on Electoral Matters did support voter ID calls in a 2018 report.

Senator Roberts said One Nation – including leader Pauline Hanson – had not seen the government’s voter ID bill, but that he hoped to see it “this week”.

“Voter ID is necessary to ensure that every vote cast was made legally,” he told TND.

Centre Alliance senator Stirling Griff told TND that he, too, had not seen the bill. However, he said he was “broadly supportive of providing appropriate ID”.

TND understands Senator Jacqui Lambie is not in favour of voter ID legislation.

“These sorts of things are very rarely anything other than self-interest on the part of the government,” he told TND.

“Now on the eve of the election they want to tweak the electoral system.”

Senator Patrick said he had “no great interest in engaging with the government on this”, unless the Coalition backed legislation for a federal integrity commission introduced by independent MP Helen Haines – which he called a “more pressing legislative priority”.

“Corruption in government is a bigger and more urgent issue,” he said.