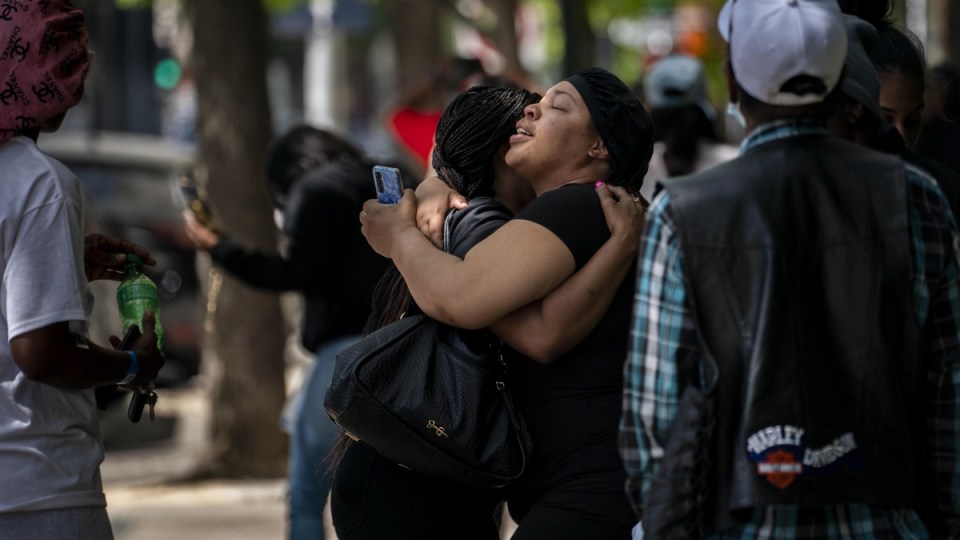 Victims' families comfort each other at the scene of the shooting in downtown Sacramento. Photo: Getty

Sacramento police have announced an arrest connected with the shooting that killed six people and wounded a dozen others in the heart of California’s capital city as multiple shooters fired more than 100 rounds and people ran for their lives.

Police said they booked Dandre Martin, 26, as a “related suspect” on assault and illegal firearms charges.

Detectives and SWAT team members found a handgun during searches of three homes in the area.

The arrest came as the six victims killed were identified in the shooting that occurred about 2am Sunday (local time), as bars were closing and patrons filled the streets near the state Capitol.

The burst of rapid-fire gunshots from at least two shooters sent people running in terror.

Twelve were wounded in the neighbourhood just a few blocks from Golden One Arena, where the NBA’s Sacramento Kings held a moment of silence before their game Sunday night.

Police Chief Kathy Lester said a stolen handgun was found at the crime scene and pleaded with the public to share videos and other evidence.

“The scale of violence that just happened in our city is unprecedented during my 27 years here,” Ms Lester had said earlier at a briefing at police headquarters.

“We are shocked and heartbroken by this tragedy. But we are also resolved as an agency to find those responsible and to secure justice for the victims and the families.”

Small memorials with candles, balloons and flowers were placed Monday morning near the crime scene.

One balloon had a message on it saying in part: “You will forever be in our hearts and thoughts. Nothing will ever be the same.”

Arrest made in deadly Sacramento shooting